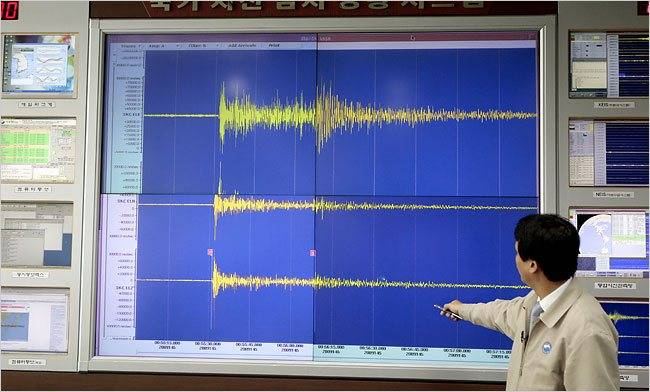 New York Times said:
Martin B. Kalinowski, a nuclear expert at the University of Hamburg, said a seismic magnitude of 4.7 corresponded to a nuclear explosive yield of about three to eight kilotons of high explosives, with the most likely yield being four kilotons.

...But Alexander Drobyshevsky, a Russian Defense Ministry spokesman, offered a different estimate, saying that the force of the blast, which the ministry confirmed occurred at 9:54 a.m. local time in northeastern North Korea, was 10 to 20 kilotons, the RIA-Novosti news agency reported. It was unclear what information the defense ministry based its estimate on. Russia estimated the force of the 2006 blast at 5 to 15 kilotons, far higher than other estimates at the time.

Now, Kim is poised to succeed again by following precisely the same script. In April, Pyongyang launched a Taepodong-2 missile, and National Security Council official Gary Samore recently confirmed that a second nuclear test is likely on the way. The North is set to try two U.S. reporters for "hostile acts." The state-controlled newspaper calls America "a rogue and a gangster." Kim recently expelled international monitors from the Yongbyon nuclear complex. And Pyongyang threatens to "start" enriching uranium -- a capacity it procured long ago...

It might be worth pointing out to them that they are a nuclear power who is technically still at war with an ally of the United States. There is a non-trivial chance that their attempted nuclear extortion will instead result in Pyongyang becoming a sea of molten glass and steel.
ExactlySolved

There is a non-trivial chance that their attempted nuclear extortion will instead result in Pyongyang becoming a sea of molten glass and steel.

Haha, as opposed to its current status as a sea of rust-covered steel and rotten wood!
mheslep
Gold Member

ExactlySolved said:
Haha, as opposed to its current status as a sea of rust-covered steel and rotten wood!

Because it is a backward country do you mean that it is no threat to anyone?
Share:
Share