Had a shower thought, and thought I spend a few minutes online with people much smarter than I to throw an idea at...

So, I have a light weight truck. Say a little dodge dakota pickup that weighs +/- 3000lbs.

I want to take out the motor and replace it with a little baby 20hp motor. So take off 500lbs to remove the current motor, say add back 100 for the 20hp. Obviously this would slow this dude down significantly, especially during acceleration. Highway speeds could be reached/maintained, but getting there would take forever. No big deal.

With my little 20hp motor (which would do pretty good on gas mileage), when I'm at a stop light, that little 5hp motor has got our flywheel up to speed (15,000 rpm). I hit the gas, the truck slowly starts to move from the 20hp motor, BUT now we kick in the Kinetic energy of the flywheel via a torque sensor or something, probably manual for now... That bad boy takes off like a porsche on cocaine. Really I'm just trying to get down to the specifics, the thought experiment boiled down...

3.Then, when the 20hp motor kicks back in and keeps us rolling at that speed, how long for the 5hp motor to get us back up to the desired rpm. I live on a farm, would love to experiment. Would be great for city driving with all these freaking stops lights!

Thanks in advance. Any thoughts would be incredible.

The general idea is feasible, and googling for "flywheel energy storage automobile" will get you to some examples of past experiments.

The math is fairly straightforward: google for "moment of inertia rotational energy" to find the formula for how much energy it takes to spin a disk up to a given speed; that tells you how much power you can take out for how long; and how long it will take your little motor to spin it back up again. (And if you come back here with more questions after you've tried that, we can help you over any hard spots).

Be aware that a flywheel storing a useful amount of energy is potentially dangerous; if it fails it'll throw shrapnel like an explosion. Also it's a gyroscope and may have interesting effects on the vehicle's handling.
jack action
Science Advisor
Insights Author
Gold Member

Nber said:
25hp vs 100hp i'm assuming would be non negligible in gas savings in the city...

Sorry to burst your bubble, but it will be negligible, maybe even worse.

All that really matters is the aerodynamics (highway) and weight (city) of the vehicle, and yours are the same in both cases.

You might think that the bigger engine will have more friction losses, but that might not be true. Friction losses depends greatly on piston speed (in ft/s, not rpm), and your 20hp engine will give its 20 hp at a much greater piston speed compared to the 100hp engine. You might even be required to get into the 'performance' mode, i.e. use a richer mixture. All in all, you could be surprised to see the 20hp engine not being as economical as you might expect.
jrmichler
Mentor

Back about 1976, a team at the University of Wisconsin - Madison built a flywheel car. They started with a Ford Pinto, kept the stock engine up front, and added a vertical axis flywheel in the space previously used by the back seat. I believe they had hydrostatic transmissions between the engine, flywheel, and rear axle. It took two people to drive; a driver and a co-driver to work the transmission controls. The car had barely enough room for the two drivers. All other space, rear seat and trunk, was filled by transmissions, flywheel, and controls. The professor in charge told me that the base car got 16 MPG, and the flywheel hybrid got 24 MPG.

I remember doing a calculation about what would happen if the flywheel bearings seized. I calculated that the car would spin about 360 degrees and come to a stop in a fraction of a second. The driver would get a case of neck twist whiplash while wondering just what had happened. Either that, or the flywheel would break free, fall onto the pavement, and bounce around tearing up the car from underneath.

If you look at a few BSFC (Brake Specific Fuel Consumption) charts, you will see the engine's best efficiency is at 1/3 to 1/2 of peak RPM at about 3/4 of peak torque. That's roughly 25% to 38% of peak power. If a car needs 25 hp to maintain a given speed, the optimal engine for gas mileage will be about 100 hp. Here is a collection of BSFC charts for real automotive engines: https://ecomodder.com/forum/showthread.php/bsfc-chart-thread-post-em-if-you-got-1466-8.html. I would expect the 20 hp engine to get worse gas mileage than the 100 hp depending, of course, on how it is driven.

Driving technique makes a huge difference in gas mileage. I average 35 MPG in a crew cab truck. Here is the thread that tells how I do it: https://ecomodder.com/forum/showthread.php/modding-06-gmc-canyon-17070.html. My sister, on the other hand, does not drive for gas mileage. But she gets good mileage anyway: https://ecomodder.com/forum/showthread.php/my-sister-does-not-drive-gas-mileage-36529.html.

If you are truly interested in gas mileage, learn what can be done with a stock vehicle before looking at esoteric changes.
some bloke

To combat the space & handling issues, could the flywheel be mounted horizontally (like a lawnmower blade) in the chassis of the car? it would raise the floor by however many inches, but would allow for a flywheel as wide as the car. this in turn would allow it to be spinning slower than a smaller flywheel. You could combat some of the safety issues by having the flywheel liquid filled, so that if it were to seize, the main mass of the flywheel could continue to move. It could also make it easier to smooth out the speed boost.

The internal design of the flywheel would have to be all about the amount of friction between the wheel and the liquid - too much and it will negate the safety features of the design. too little and it won't give you any advantage, and you'll just have an extra tank of water to haul around.

The main issue with a flywheel would be the car going uphill - once that stored energy is gone, you've got a 20hp motor pulling your 3 ton car uphill.
Rive

I don't know any other way to handle this than with some excess electronics. Mechanics is just not good at adapting to the rapid change in speed as the flywheel spinning up/down, while you actually expect power available in some controlled rate from it.
If you are ready to handle all the problems related to power electronics, then you should take a look here.
jrmichler
Mentor

Here's a figure from the February 1978 Popular Mechanics article about the UW-Madison flywheel car mentioned in Post #4. Note that the flywheel has the axis of rotation vertical. 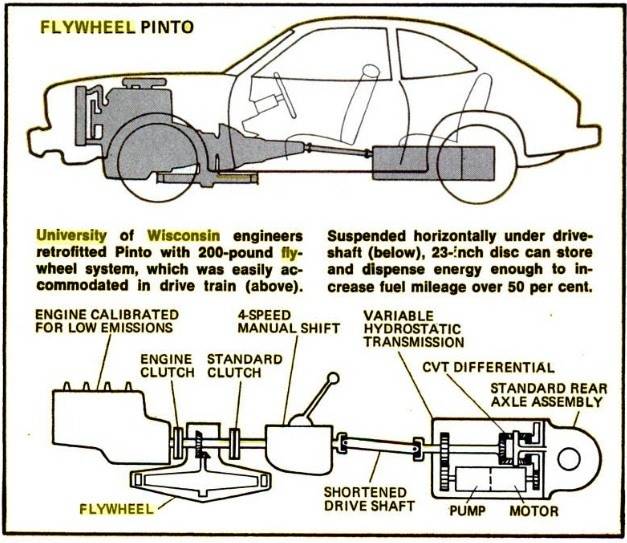 That flywheel has maximum speed of 10,000 RPM, at which speed the peripheral velocity is 1000 ft/sec. Practical flywheels need to run at the maximum practical speed. Even at maximum speed, energy storage is low compared to batteries.


some bloke said:
You could combat some of the safety issues by having the flywheel liquid filled, so that if it were to seize, the main mass of the flywheel could continue to move.

No. Anything that slips when the flywheel accelerates or decelerates does not contribute to the energy storage, but does add useless mass.
Log in or register to reply now!

What are the voltage and current in motor brushes?
2

Electrical Choosing a DC motor for a DIY Centrifugal Blower