What I was thinking about at 1:30 in the morning that caused me to surf to this site is irrelevant. But this is friggin hilarious.

#3 Recently, people in Hamburg, Germany were astonished to discover a pond filled to the brim with thousands of exploded frog corpses, which, according to the encyclopedia, is not typically how frogs enjoy their habitats.

So what had happened at this pond of death? Was it a genetic defect? Some kind of virus? A fat guy with frog-stomping boots? As it turns out, none of these are correct. The real culprit was a crow.

You see, this species of frog has an overzealous defense mechanism. When threatened, they puff up with air to several times their natural size in order to scare away enemies.

This seems like it would just make them look fatter and thus more appetizing to larger animals, but who are we to question evolution?

Anyway, crows are smart, and they've learned (possibly from the same encyclopedia) that the frog's liver is the best-tasting part of the animal. And not to waste any effort, they don't actually kill the frogs. They just swoop in and tear the livers out of their still-living victims with their beaks.

The frogs, aghast at the frog equivalent of waking up in a bathtub full of ice with one of their internal organs missing, go ahead and puff themselves up in a hilariously delayed defensive response, neglecting to consider the gaping holes where their livers used to be.

The result is a sort of offal cannon (or meat shotgun, if you will), spraying out entrails in every direction like the silly string of the damned.

That is the most entertaining article I've read in a while. :D

I'd like to add to the list "a glass of water" Look up Microwaves and superheating if you've never heard of that.
Phrak

The author is surprisingly adroit on the phenomena and circumstances of exploding frogs. One can only wonder how this occured.
russ_watters
Mentor

It's all paraphrased from a news article, linked from the link I posted.
BobG
Science Advisor
Homework Helper

How come none of the articles about the exploding toads ever mention the species?

At least the veterinarian mentioned in most articles is a real expert on amphibians - plus other articles mention that the crows are probably plucking the livers out of the toads while they're preoccupied with having sex (which is why the phenomenon only occurs during mating season). And many species of toads do secrete chemicals on their skin that make them foul tasting to predators, so eating only the livers would make sense.

Yet, all of the articles on this neglect to mention the species.
BobG
Science Advisor
Homework Helper

The exploding toads seem to have been occurring on a yearly basis since at least the late 60's, except perhaps at not such extreme numbers.

It seems to me that an expert in biology might be interested in either verifying or busting this myth. Except waiting for the event to occur naturally could be very frustrating. However, a biology expert that knows how to use an electrojaculator and with friendly contacts with experts from other career fields could have a obtained an appropriately sized mini-electroejaculator; a biology expert that enjoys working in the light of the moon, could have started out doing field tests to detemine if the myths were even feasible, but then found she enjoyed the experiments so much that she got just a little carried away by her field tests.

Naturally, once she realized the havoc and horror that she wreaked, she would never mention this subject again and possibly even try to squelch any discussion of the subject.
Ivan Seeking
Staff Emeritus
Science Advisor
Gold Member

Related: I recently ran across the story of the Malaysian exploding ants, Camponotus Saundersi, which can intentionally explode and spew poison on an attacker.
Lacy33

Ivan Seeking said:
Related: I recently ran across the story of the Malaysian exploding ants, Camponotus Saundersi, which can intentionally explode and spew poison on an attacker.

russ_watters said:
What I was thinking about at 1:30 in the morning that caused me to surf to this site is irrelevant. But this is friggin hilarious.

This is another great video: Zombie caterpillar

Evo said:
This is another great video: Zombie caterpillar

Some of their stories on that site are bit hard to believe.. including the chair exploding
hypatia

Topher925 said:
:yuck: Why do you keep posting this!

Native to the tropics is the Sandbox Tree, a 100-foot tall exclamation point to the phrase "Do not touch." Every inch of this towering monster is poisonous, and its trunk is laced with so many spikes it looks like a gladiator weapon. If this tree could walk, it would enslave humanity.

If somehow you manage to get beyond its toxic bark and leaves (and the spikes, never forget the spikes), you still run the very high risk of getting pelted in the face with the natural equivalent of a fragmentation grenade.

You see, the Sandbox Tree's seed pods are fist-sized fruit that, when ripe, explode with such force that they routinely wound nearby people and livestock, which is unsurprising when you look at the shrapnel they put out:

does anyone remember this?

Evo said:
Because you always look.

That is epic. You should post the videos of parasitic fungus that just grows out of living creatures, if I remember correctly there is a species of fungus for everything out there. Look up the one with the ant. It just grows out of his head!

Your jaw begins to drop midway slowly reading this:


Deep in the Cameroonian rain forests of west-central Africa there lives a floor-dwelling ant known as Megaloponera foetens, or more commonly, the stink ant. This large ant -— indeed, one of the very few capable of emitting a cry audible to the human ear -— survives by foraging for food among the fallen leaves and undergrowth of the extraordinarily rich rain-forest floor.

On occasion, while thus foraging, one of these ants will become infected by inhaling the microscopic spore of a fungus from the genus Tomentella, millions of which rain down upon the forest floor from somewhere in the canopy above. Upon being inhaled, the spore lodges itself inside the ant’s tiny brain and immediately begins to grow, quickly fomenting bizarre behavioral changes in its ant host. The creature appears troubled and confused, and presently, for the first time in its life, it leaves the forest floor and begins an arduous climb up the stalks of vines and ferns.

Driven on and on by the still-growing fungus, the ant finally achieves a seemingly prescribed height whereupon, utterly spent, it impales the plant with its mandibles and, thus affixed, waits to die. Ants that have met their doom in this fashion are quite a common sight in certain sections of the rain forest.

The fungus, for its part, lives on. It continues to consume the brain, moving on through the rest of the nervous system and, eventually, through all the soft tissue that remains of the ant. After approximately two weeks, a spikelike protrusion erupts from out of what had once been the ant’s head. Growing to a length of about an inch and a half, the spike features a bright orange tip, heavy-laden with spores, which now begin to rain down onto the forest floor for other unsuspecting ants to inhale.

fourier jr said:
does anyone remember this?

fourier jr said:
does anyone remember this?

Thought I would post a pic of the mushroom (fungus) growing out of an ants head for you. 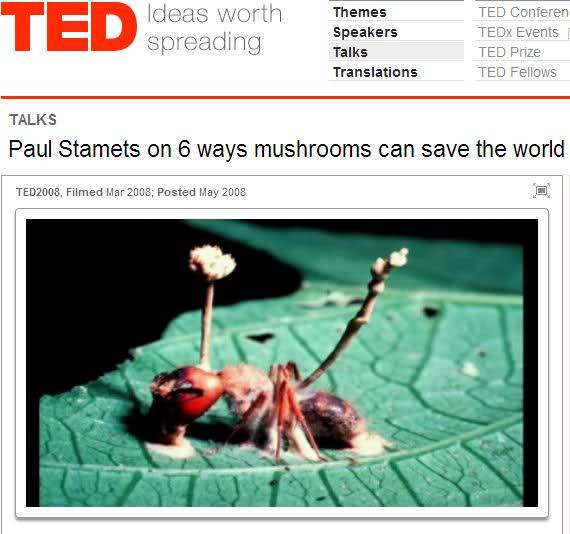 Watch the video http://www.ted.com/talks/lang/eng/paul_stamets_on_6_ways_mushrooms_can_save_the_world.html", fast forward to 13:45, intro followed by damage to the ant in stages.

It sort of blew my mind when I saw it for the first time too.

Beautiful. My heart bleeds watching this, but then I am also fascinated by the fungus.
Starts at 29th second:

I'm not sure why your heart would bleed, but....thousands of species of fungi, all designed to attack a specific species of insect. I guess it's a good thing none have figured out how to attack us!

...so if you see someone climbing a tree, with a wild look in his eyes, best to shoot him and bury the body!
GeorginaS

Evo said:
This is another great video: Zombie caterpillar

Okay, I couldn't watch the whole thing. It seemed to me that nothing good was going to come of the whole situation.
Last edited by a moderator: Sep 25, 2014
cronxeh
Gold Member

GeorginaS said:
Okay, I couldn't watch the whole thing. It seemed to me that nothing good was going to come of the whole situation.

VOTE PF Photo Contest - That Shouldn't Be There

Are all things in the universe caused by things that cause things like themselves?

Things that are impossible
3

Things that are of interest.