FORCES On a bridge

A bridge, constructed of 11 beams of equal length L
and negligible mass, supports an object of mass M


as shown. (Intro 1 figure) Real bridges of this sort have steel rockers at the ends (check one out sometime), these assure that the support forces on the bridge are vertical even when it expands or contracts thermally.

Throughout this problem, use g for the magnitude of the acceleration due to gravity. 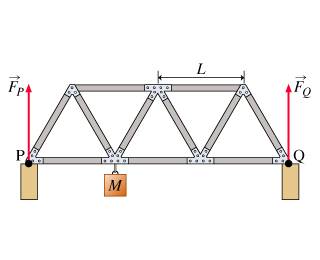 Find FP , the vertical force that pier P exerts on the left end of the bridge.


My attempt:
I know the mass exerts a clockwise torque on the left end
and that their is also the force of the whole bridge on the bridge due to gravity

so Fp = Torqueduetomass + the whole weight force /2 (because it's halved? due to theother end of the bridge helping out)
Last edited: Apr 21, 2009

Doc Al said:
Looks like you dropped a factor of 2.

wait can you please explain?

Yes, that is correct. (Don't lose that 2 in the denominator.)
vorcil

Doc Al said:
Yes, that is correct. (Don't lose that 2 in the denominator.)

thanks, i've changed the question now this is one i've had ages to do but keep getting it wrong
Doc Al
Mentor

vorcil said:
thanks, i've changed the question now this is one i've had ages to do but keep getting it wrong

A rolling ball accelerating down an incline

Ball rolling in a loop