So I'm getting my water heater changed and my circuit breaker is probably wired wrong because we had to flip a bunch of switches not labeled "water heater" to actually shut the power off. One thing I didn't really get was why one switch shut down the voltage between the red and black wires, but we had to flip another one to turn off the voltage between the red and the cable shell that housed the wire.

I've been told that the ground plug in appliances is for the body, in case there's a loose live wire or something and it touches the body, so that there's a path for it that's less resistive than your body. However, I never understood why the body wasn't just also tied to the return, why it needed a separate line (which I assume eventually goes to the same return...?).

I'm also unsure if these two questions are related. In the case of the breaker, shouldn't the first thing have cut the power in the red wire, hence there wouldn't be a voltage between that and either ground or cable shell?

Sorry, this and static electricity is the kind of handyman stuff we didn't even touch on in EE school ;)

Water heaters use two hot legs at 120v each for a total of 240v between them. This requires a double-width breaker or, if you have a crappy electrician' two single-width breakers.
sirpsycho85

Thanks for the quick response. So both red and black are 120V to the cable? So...did I just not pay close attention to where he was actually measuring the voltage? Because wouldn't it be dangerous if the current was running along the cable shell? Maybe it was actually a conductor on the inside of it...

While this thread is ongoing, can you please answer the second part of my question: why there is a separate ground plug for appliances.
dlgoff
Science Advisor
Gold Member

This is what russ is saying about the heater having a 230 volt element. 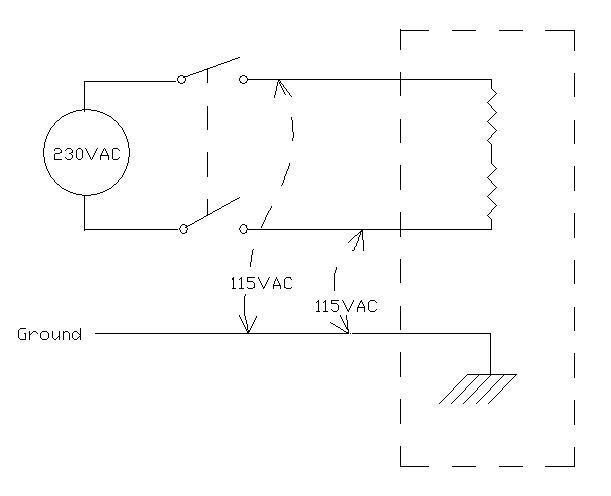 Oh, the two wires powering the element are the red and black ones you mention.

Not so sure about that schem...if you're showing that source to be 230V, is what you're really saying the attached image?

Because I think that's how you would get 230V, and have 115 between the ground and each of those wires? But that doesn't seem to make sense because you'd really be coming into the unit with at least two 115V wires and a shared ground wire, wouldn't you? And I only see two wires. Is there any way you can help draw it in greater detail, as the way it's depicted in your diagram with a 230V AC source I don't see how you would get that 115V difference to ground...

Ground is not involved in the circuit. It's there as a safety return in the event there's a short from either the red or black hot wires. Evidently you have two individual circuits, one for each hot wire, instead of a two-pole circuit breaker.

...but we had to flip another one to turn off the voltage...

That's why it's nice to have a two-pole breaker that can remove power from both hots with a single switch.
sirpsycho85

What do you mean by "ground is not involved"? Oh wait let me think this through...if they're out of phase, I guess you will always have that 230V across...so the return wire from each of the two sources doesn't lead to the heater, they are just going to ground hence you get that 115V from each hot wire to the ground too. Now it makes sense, thanks!

Then on to the second question I had. Why is there a special ground wire for normal appliances? If the point is safety, why can't it be connected to the neutral wire which is grounded too?

And yes it's nice to have that breaker...a single big switch was LABELED water heater, but clearly the guy did it wrong.
dlgoff
Science Advisor
Gold Member

115VAC circuits for "normal Appliances" use only one hot leg wire and a neutral return wire. The ground wire is still a safety return that is connected to the appliance frame/enclosure. The neutral wire can have a small potential since it is a return but you will find it is connected to ground at the breaker box.
Share:
Share