When the PF Photo contest went on a brief hiatus a month ago due to my Alaskan Cruise, I posted a few photos during the trip. In case there was some interest in it, I've edited a couple of videos of that vacation.

The first one is my salute to the beauty of Alaska's Inside Passage. It truly was spectacular. I called it "The Wonder of Alaska Inside Passage" because we were sailing on the Disney Wonder ship.


The second was one of our excursion, which was the Alaska Canopy Adventures. It was 7 ziplines and 3 rope bridges. And as a bonus, we saw black bears from high up above!


At the end of the adventure, we were awarded medals for completing it. 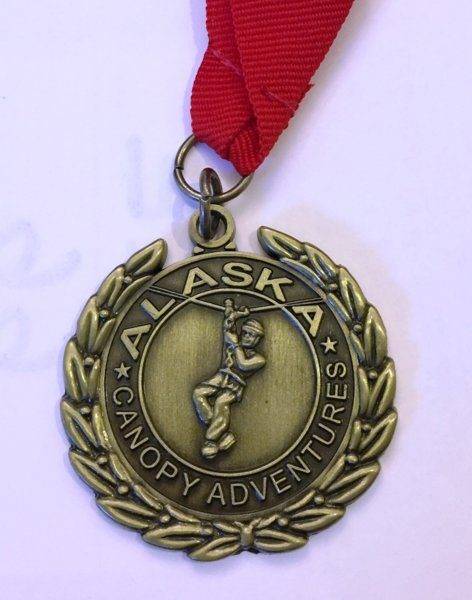 It was such a fun trip that a number of us are trying to hatch a plan to go back in a couple of years.

What, the videos or the medal?

On our last full day at sea after we left Ketchikan and heading back to Vancouver, the ship took a less crowded path and was more exposed to the Pacific Ocean. We woke up with the ship being rocked by the rough seas. They closed the open promenade on Deck 4, and closed off the topmost level, Deck 10. And the pools were closed as well. You can see in this video why, and it should tell you how rough it was.

I've gone through rougher seas than this, though, during one of our Caribbean cruises.

ZapperZ said:
I've gone through rougher seas than this, though, during one of our Caribbean cruises.

My worst was at night on a North Atlantic cruise with the remnants of a hurricane to the south. Chairs were sliding all over the deck above us for hours until I finally went up there to secure them myself. That was an interesting midnight walk.
BillTre
Science Advisor
Gold Member

I used to work on an oceanography ship for a few months when in college.
Rough seas enhance both ping-pong and foosball games.
dlgoff
Science Advisor
Gold Member

ZapperZ said:
The first one is my salute to the beauty of Alaska's Inside Passage. It truly was spectacular. I called it "The Wonder of Alaska Inside Passage" because we were sailing on the Disney Wonder ship.

Turning a sphere inside out (video)

D
Video inside: could someone explain how this works?

S
Another Passage of Time Question

News U.S.A. must sell Alaska to Korea and Japan

News Lawyers for the Republican National Committee are heading to Alaska