sfblues7
I need some help trying to figure out the relationship between albert michelson and einstein. Basically it is called the Einstein number project and we have to figure out how many numbers (aka people) it took for michelson to get to einstein.

For Example: (This Einstein number is 4) Arthur Wiggins had a graduate school professor at U of M named otto laporte, who was student of Anrold Sommerfeld, who met einstein several times in germany.

Now i cant find any info like this to find the einstein number between michelson and einstein. Can someone help me out on this? thank you

Here's a photo of the two of them together. 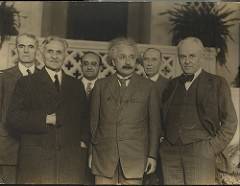 Michelson, with the moustache, stands to the left of Einstein, with an even more famous moustache.
Last edited: Feb 22, 2011
Share:
Share

D
Insights How well do you know Albert Einstein? - Comments
3

How did Einstein earn his PhD?

Modern Einstein has an idea but needs your help