TL;DR Summary
How large is it?

I saw on another forum mention of Alcyoneus radio galaxy and have been google searching but can't find any information on it from any reputable astronomy related websites.

Is it real or just fake news?

It's perhaps worth explaining what the 5 Mpc size means in this context, though.
It's not that this, and other like it, giant radio galaxies (GRGs) are this large in terms of a disc, or an ellipsoid, of stars extending to 5 Mpc end to end.
The quoted size is for the range of energetic particles emitted from the neighbourhood of the central black hole, which stream in long, thin jets at relativistic speeds, additionally exciting the extremely diffuse plasma surrounding the galaxy to form radio wave-emitting structures called 'lobes'.
The galaxy hosting this active galactic nucleus (AGN) is unremarkable. The mass is a few times lower than the Milky Way.

In this picture from Wikipedia, an example of a radio galaxy is shown: 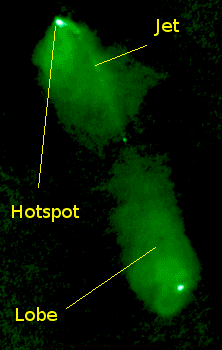 The radio galaxy is the whole thing, so its size would be quoted as the distance between the terminal points of the radio emissions, shown in green. But the host galaxy, in the usual sense of a collection of stars, is barely larger than the central green point.
MikeC111

Thank you for clearing that up for me. When someone said the galaxy was that big I thought it highly unlikely.
Share:
Share

I Fast Radio Bursts (FBR) detected in our own Galaxy

I What does the output of a radio telescope look like?

B Our Sun's position in the Milky Way Galaxy

B Dark matter in galaxy IC1101

B Are the stars that we see in constellations within the Milky Way galaxy?

B Radio source Hercules A and galaxy 3C 348

B So what's your go-to method to locate M31 (Andromeda Galaxy)?

B How does the Milky Way galaxy move in the local Group?

I Ultraluminous X-ray source in the galaxy NGC 55

I Matter leaving a spinning galaxy