I'm curious, do we have many students here who participate in school / college / university sports teams?

My wife and I ate dinner in our college's dining hall today. (She teaches German here, and this year started to have her weekly "German table" at dinner instead of lunch, by request of her students.) I was struck by the number of students wearing warmup suits for one of our sports teams.

It turns out that about 1/3 of our students are on one of those teams. This is for competition with other schools, not including intramural teams that play only each other on campus. I suspect this is fairly typical for small colleges such as ours (1100-1200 students). At large universities the fraction is surely much lower.

Some of our physics majors are in fact also athletes. The fraction is somewhat less than in the general student body, but probably averages around 1/5 to 1/4. We regularly talk to prospective students that are being recruited by one of the coaches.

I know that this strong emphasis on athletics at the college/university level is probably peculiar to the U.S.

We also know of "mens sana in corpore sano" in Europe. Although I am nowhere close to my level as an undergraduate, I still try to practice several times a week, and I am convinced this improves my productivity. It was also discussed recently in a motivation thread :

Borg said:
You noted that you are normally physically unmotivated to do anything. Have you ever tried any kind of regular exercise routine?

I was surprised that most coworkers at the lab, I think more than 50% of them, also exercise regularly. I know a 70 years old senior, he runs one hour every morning !
Last edited by a moderator: May 4, 2017
Nebula815

I do physical fitness all the time. I am not an "athlete" per se, however as soon as I can, I intend to get into gymnastics and ice hockey. But I do lots of conditioning work, strength training, flexibility training, etc...I also watch my food intake.
jtbell
Mentor

humanino said:
We also know of "mens sana in corpore sano" in Europe.

But you don't have e.g. football matches between the universities of Berlin and Munich, in stadiums filled with > 100 000 spectators, and shown on national television, do you? OK, we don't have that where I teach, either. But I went to graduate school at the University of Michigan, where they did have that. In fact, I lived across the street from Michigan Stadium for several years, just below and to the right of the word "Views" in this picture. 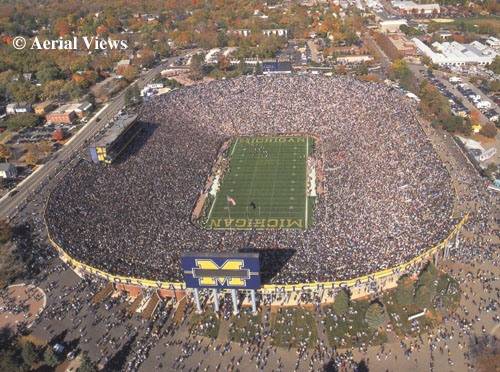 Here, we do have a nice new multimillion-dollar stadium for American football that has 6 500 seats, a smaller new stadium for "real" football, a baseball field, and our old football stadium which is now used mainly for lacrosse. And some of our football team's matches do appear on regional cable TV.

We have men's and women's teams for inter-school competition in eight sports apiece. Good players get scholarships specifically for being on sports teams, and coaches spend a lot of time scouting out players at high schools and recruiting them to come here.

This is all in addition to sports and fitness-type activities for individual health and purely "local" competition between teams formed by fraternities, social clubs or just groups of friends.
humanino

jtbell said:
But you don't have e.g. football matches between the universities of Berlin and Munich, in stadiums filled with > 100 000 spectators, and shown on national television, do you?

It's a rather independent question I think. We do not have that, and I hope this business never makes it to Europe honestly. We have sport professionals, and a University is not a place to make money on people's education. I never felt I would need such a circus for motivation. Sorry, it's just either personal bias or cultural gap.
Doc Al
Mentor

Suggested for: Any athletes here?

Any past physics olympians here?!

Is there any physics to this 'punch'?

Tips and Tricks for any Occasion

Any scientists here done interviews on shows? What's it like?

Does anyone know why Chris Hillman stop posting here?

Any geniuses on this forum?

Discuss here or in the Lame Jokes thread....?