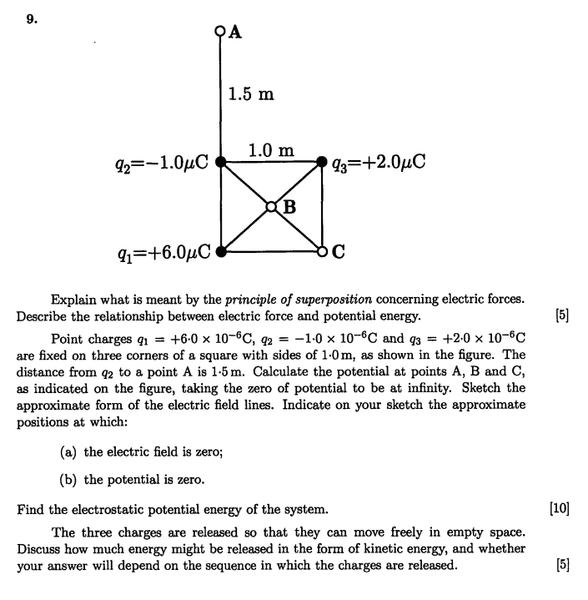 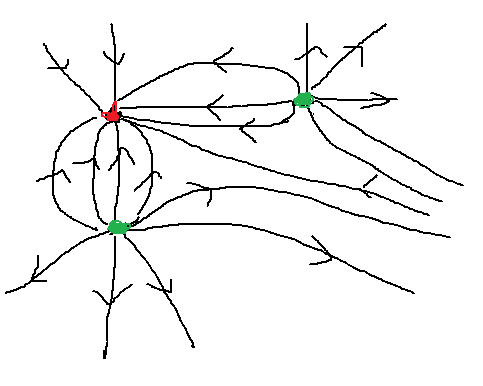 I've managed to do the first parts up till part (a) and part (b), where I have some questions:

2. how do you know where the E-field is zero? Is it in the region of space where there's some sort of special pattern?

I've found the PE of the system..

But for the last part, I'm tempted to say by the conservation of energy it shouldn't matter how you release them but I can't seem to prove it..

Your sketch isn't quite right.
At sufficient distance from the ensemble, you can treat the charges as being effectively at the same point. What does that tell you about the field there? What can you deduce from that regarding those field lines that terminate at the negative charge?
Once you have the sketch right, you should see points where there are no field lines.
Another hint is to look at [STRIKE]the triangle formed by the two positive charges and the point C[/STRIKE]. See if you can determine which way the field lines would go (into or out of the triangle) at points along its periphery.

Edit: That triangle wasn't a suitable region. To do what I was trying to do with that you have to pick a region which does not include any of the charges, not even on its boundary. There is a zero field point in that triangle, but I'm not sure of the best way to prove it.
Last edited: Apr 15, 2013
Log in or register to reply now!

Related Threads on Arrangement of charges

Electrostatics of 4 charges arranged in a square

Dipole moment for a charge arrangement

Wheatstone bridge arrangement with an ideal wire in middle

How many possible arrangements are there for a deck of 52 playing cards?