So I'm doing some spring cleaning in late June, and low and behold, I find an old relic out of a storage area I was cleaning out that I had to share with y'all.

It was 1980, Ventura, California. I was 13 years old and the hormones were raging and my passion for all things technology was raging too. When I was living in Santa Barbara in the mid 70's, I remember my dad dropping me off at the "arcade" in Isla vista while he went and ran some errands with, get this, one dollar. That was four quarters. So I was supposed to make 4 quarters last two or three hours. I guess it may have worked because I became the pinball wizard at that local arcade. And back in the mid-70's, that's about all they had, pinball machines. I learned to win new games so I could stay entertained until dad picked me up in his dilapidated '65 VW Beatle.

Fast forward to 1979, I'm living with mom in Ventura, CA and stumble upon this complex of entertainment centers next to the freeway. It was a trilogy of fun for a 13 year old. There were three establishments:

1) Skating Plus--This was a roller rink that was every much the Studio 54 of Ventura at the time in the late 70's.

2) Buena lanes--This was a bowling alley in the same parking lot as Skating Plus and featured the old farts of the 60's but where we kids ransacked on a regular basis for reasons I don't remember.

3) Golf-n-stuff--This was a miniature golf course cause-celebre because it was really cool and had a great view of the freeway.

So back when I was in the 7th grade, I used to dress up full-on polyester suit, I looked like Shaft from the TV show. Brown polyester pants and a gigolo shirt. I thought I was real cool. What we used to do back then was talk up the middle school skater girls and try to trick them into taking a walk out to golf-n-stuff so we could make out with them on the golf course. Fortunately, back then, there were a lot of willing victims

Anyway, back to the main story, Skating Plus was the first to get Space Invaders I think in 1979. This was a huge deal. Everywhere else only had pinball machines. I loved Space Invaders and quickly became proficient in it, but it wasn't long afterwards that "Asteroids" came out and it was clear that this was a revolutionary jump from from Space Invaders and it was basically the second major video game released. Wow.

In any case, I quickly became proficient in Asteroids also and won a contest at the gaming center at Golf-n-Stuff in 1980. Long time ago but it was a big deal at the time because Asteroids was an extremely popular arcade game at the time and there were about 40-50 contestants, from all age ranges across the county.

Guess what? I won. They gave me this trophy and filled it up with tokens. The cup looks small but it actually held about 100 tokens, which was significant back in the day when your a 13 year old gamer and don't have any money. Also, back then, there wasn't any of this you gotta put in 2 or 4 tokens to play a game. It was one token, one game.

So back to the nostalgia, I actually found that trophy cup in storage and thought I'd post it for any gaming historians that might get a kick out of it. I put a strip of black tape over my name cause I like my anonymity

If you really wanted to identify me, I guess you could call up golf-n-stuff and asked who won, though... 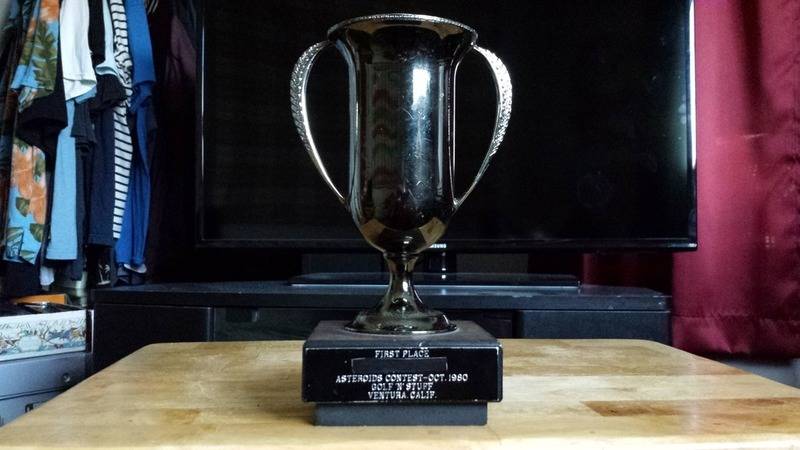 Do you care if I share the photo and the story with my retro-computer loving, non-PF friends? I am sure they will be delighted.
DiracPool

Borek said:
Do you care if I share the photo and the story with my retro-computer loving, non-PF friends? I am sure they will be delighted.

What is the purpose of nostalgia?
2

B
Nostalgia for the everything and the immortal.

Is nostalgia a some kind of disorder?

Asteroids Close, But no cigar!