Vanadium 50 said:
That doesn't mean that in general turning around is a better use of time than a restart checklist.

No, you're missing the point of Cockpit (Crew) Resource Management (CRM). The idea is to split the responsibilities. One pilot looks after aviating, and the other can focus on checklists. It is not either or, it is "do both."

In the Eastern 401 crash linked above. All three (maybe 4) people in the cockpit focused on a malfunction, leaving nobody to fly the plane. Out of that accident came the doctrine of CRM.

Flying straight and level out to sea, allowed autopilot while both human pilots focused on something else. Flying circles near the airport would have forced them to split up, with one flying and the other doing something else.
russ_watters
Mentor

Vanadium 50 said:
Clearly in this case it would have been better to have turned around. That doesn't mean that in general turning around is a better use of time than a restart checklist. We don't expect our pilots to be robots, but we don't expect them to be precognitive either: at the time of that message, they had only lost one engine.

Had the outcome been different - say a runway accident with 809 - because they turned back immediately after losing one engine, would we not criticize them for turning back too soon rather than attempting a restart?

No criticism yet, just investigation. We have identified a potential better outcome if a different process (better process) were used (and more than one is on the table*). We don't yet have enough information to determine if either were foreseeable results.

*I'm leaning toward Option 1. There's no guarantee that this would have helped. And like you said, Options 1 & 2 also carry risks (landing heavy, for example).

Also, ABCDE is a procedure guideline, not a checklist. As @anorlunda said, running a checklist and deciding whether you should are two different things.
Last edited: Jul 22, 2021
Vanadium 50
Staff Emeritus
Science Advisor
Education Advisor

anorlunda said:
No, you're missing the point of Cockpit (Crew) Resource Management (CRM). The idea is to split the responsibilities. One pilot looks after aviating, and the other can focus on checklists. It is not either or, it is "do both."

If you are saying "Do the checklist, but don't get too far from the airport", I sort of agree. I say "sort of" because of the geography of the area. Have you ever been there? North of the airport, you have highlands in about two miles. East of the airport you have downtown with several buildings over 400 feet. So I see where you might want to avoid that.

I don't know what a 737's turning circle is. Can it do a 360 in two minutes? That would mean it's a minute to turn around, or at 180 knots, 3 nautical miles. I wonder if they were thinking to line the plane up for 8R. (I had to look it up - I'm not that familiar with the airport) I can definitely understand them not wanting to be in the right spot but pointing in the wrong direction.
russ_watters
Mentor

A "standard turn" for an airplane under 250 kts (which this one would have been) is 360 degrees in two minutes.
https://en.wikipedia.org/wiki/Standard_rate_turn

360 in one minute or two?
mfb
Mentor
Insights Author

I drew one 5 km and two 10 km diameter circles on the map (from Bloomberg), there should have been more than enough space to fly in circles. The turn towards the airport matches a 10 km diameter pretty well. 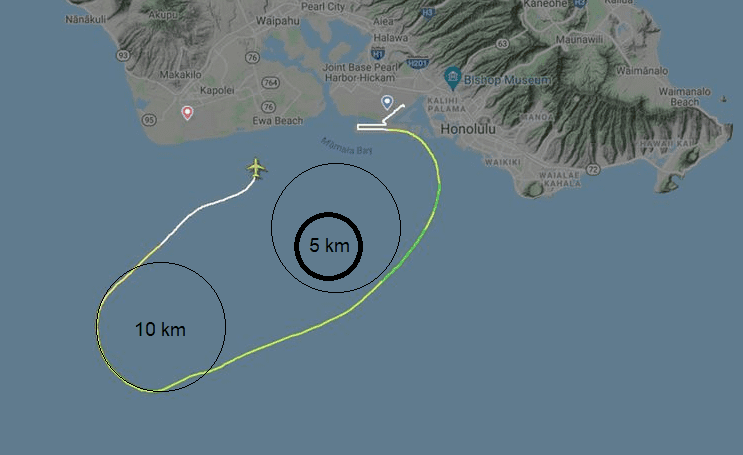 Let's wait for the release of the cockpit voice recorder (CVR) and the black box. That should conclusively tell us if both pilots were focused on the failed engine, or whether one pilot remained focused on flying the airplane.

The CVR may also reveal why at 10 seconds after takeoff clearance, they radioed an intention to return to airport, but 100 seconds later they asked for a delay in returning. That decision can then be compared with their training.
Vanadium 50
Staff Emeritus
Science Advisor
Education Advisor

I think @mfb posted a pretty good map. Both the takeoff and the turnaround circles are about 6 miles in diameter. It also looks like they are about 6 miles away from what would be in hindsight the best position, which is not too far off from the famous 87 seconds.

I listened to the ATC again. Much oddness.

Vanadium 50 said:
While 810 had a declared emergency, ATC cleared T4 809 to land, and KH 56 to take off. I would have imagined they would have stopped all non-essential operations.

It is normal for ATC to continue some operations when handling an emergency aircraft. But, they have to have the bandwidth to do that and make sure not to interfere with the emergency operations. There's usually not a problem landing a plane or two while the other guys are running checklist or in the traffic pattern. They are experts at timing and sequencing operations, they do it all day long every day.

I heard some airline pilots (airlinepilotguy.com) commenting that the busy radio channel was partly the result of the emergency aircraft not clearly declaring an emergency with a "Pan Pan" or "Mayday" call. They said that while pilots are sort of monitoring other traffic comms, they are only really listening for specific stuff that effects them. But, they are hyper sensitive to hearing "Mayday" and they know to shut up and only transmit essential queries if they hear that. Aside from following ICAO standard comms, they said that it is important to clearly let everyone know that we aren't doing business as usual; get everyone's attention first, then you can explain later.

I also recall an ATC guy at JFK say that "Emergency", "Pan Pan", and "Mayday" all mean the same thing to them, they are processed the same way.
Vanadium 50
Staff Emeritus
Science Advisor
Education Advisor

anorlunda said:
Let's wait for the release of the cockpit voice recorder (CVR) and the black box.

Have they been recovered? (And maybe the engines?) They are in a couple hundred feed of water. Too deep for conventional divers, but not inaccessible. Just hard to get to.
berkeman
Mentor

Vanadium 50 said:
Have they been recovered? (And maybe the engines?) They are in a couple hundred feed of water. Too deep for conventional divers, but not inaccessible. Just hard to get to.

The latest news I saw was from about 10 days ago saying that a salvage company was being contracted with to do the recovery of the two boxes from the tail. Nothing since then.

The NTSB website's latest update was way back on July 5th...

It would be good if they could bring back the engines as well, although of course that is a much more complicated undertaking than the black boxes. It also might not tell us anything. (Engine condition? Like they've been sitting in salt water for a month)

The reason I am thinking along these lines is the economics of airplane engines. The initial cost is low (in some cases actually zero) compared to the required maintenance. So replacing an engine due for service with one that is almost due for service can make sense economically. And right now, with such low demand, such engines are readily available.

Sounds sketchy, I know. But what we are hearing about Rhoades/Transair is that they may be kind of sketchy.
berkeman
Mentor

berkeman said:
The latest news I saw was from about 10 days ago saying that a salvage company was being contracted with to do the recovery of the two boxes from the tail. Nothing since then.

Looks like this is the company they contracted with (conveniently based in Hawaii), but no news that I can find for how far along they are in the recovery...

In any incident like this, the National Transportation Safety Board gets involved immediately. And one of its highest priorities is to recover the Flight Data Recorder, more commonly referred to as the Black Box (even though they’re orange).

But there was a problem: The plane had gone down in water some 420 feet (130 meters) deep. Side-scan sonar was initially used to locate the jet, which had broken apart. And then, the NTSB requested assistance from Sea Engineering Inc., which has two different Remotely Operated Vehicles.

For some reason they are waiting for the Fall to recover the flight recorders. No idea why...


An undersea effort to recover key components of a Hawaii cargo jet that crashed July 2, leaving its wreckage hundreds of feet under the water, is expected to begin this fall.


The U.S. National Transportation Safety Board is coordinating with the insurance company for Transair, the small cargo carrier that was operating the plane, the agency said in an emailed statement.

Sure, but the accident has been two months ago. Why was there no attempt yet?
anorlunda
Staff Emeritus
Insights Author

mfb said:
Sure, but the accident has been two months ago. Why was there no attempt yet?

I don't know, but I can guess. Such recoveries often use specialized submersibles or ROVs. They are transported by ship. So a ship may need to sail halfway around the world to reach the crash site.
Astronuc
Staff Emeritus
Science Advisor

berkeman said:
For some reason they are waiting for the Fall to recover the flight recorders.

I was looking for something like - https://www.pacioos.hawaii.edu/currents/model-oahu/, but more along the lines of a yearly/seasonal intensity model.
anorlunda
Staff Emeritus
Insights Author

Astronuc said:
I believe that Autumn is the quietest period, i.e., less ocean turbulence/current velocity. I was looking for an article that would describe the seasonal variation of undersea currents around Hawaii, but have not found one.

For surface winds, use the seasonal marine pilot charts. https://msi.nga.mil/Publications/APC

Below are excerpts of the pilot charts near Hawaii, for the months of September and March. In both months, the prevailing winds are NE or E at force 4 (11-16 knots) with 0-2 calm days per month. Both months look almost the same. That's consistent with the NE trade wind zone. 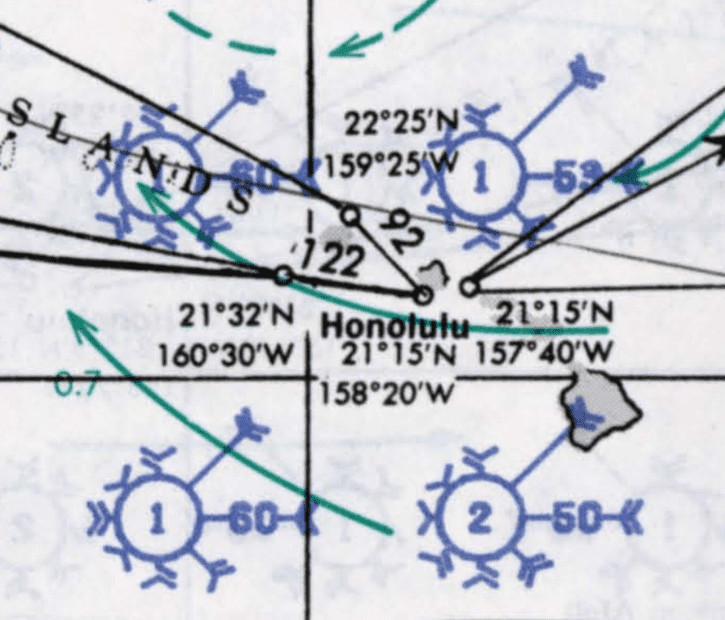 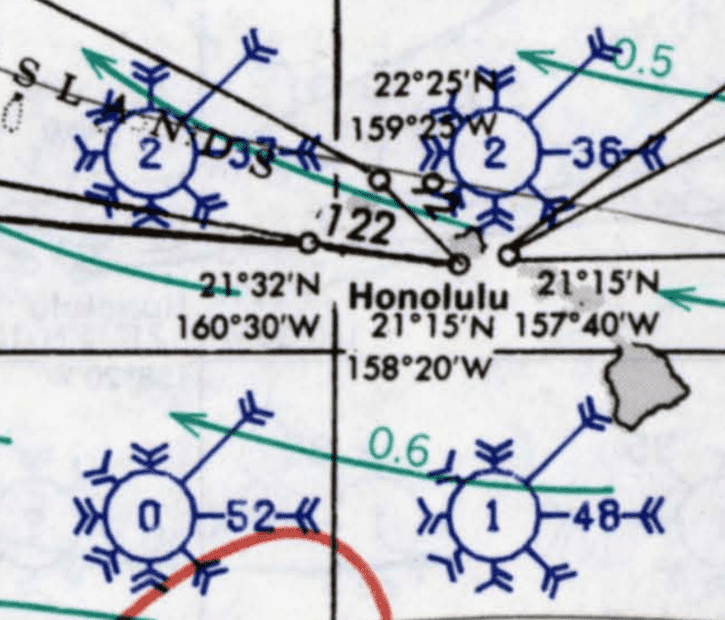 Currents are more difficult to find at the specific depth of the wreck. Publications give surface currents and deep ocean currents, but this is neither of those.
Share:
Share