Broken lamps in a circuit

I have a 12 volt battery and 3 lamps in series.

The last one is broken. What is the voltage on every lamp?

My book is saying that the current through the lamps that are not broken is 0 cuz the circuit is not "complete" therefore the voltage on the lamps that are not broken is 0. (I understand this). But then the book is saying that the voltage across the broken lamp has to be 12 volts. So I wanted to see what would happen if the first lamp is whole but the two last lamps are broken. Would that mean that there is 6 volts on every broken lamp?

No, there would be 12 V across the terminals that have an unbroken path to voltage source. If there's a break on both sides of a component (or group of components) then it is entirely isolated: it may as well be on a shelf in a cupboard in a another building

In this figure the path from the + side of the battery is colored in blue. The path from the - side is in green. Broken lamps are X'd. A path stops at a break in the circuit. 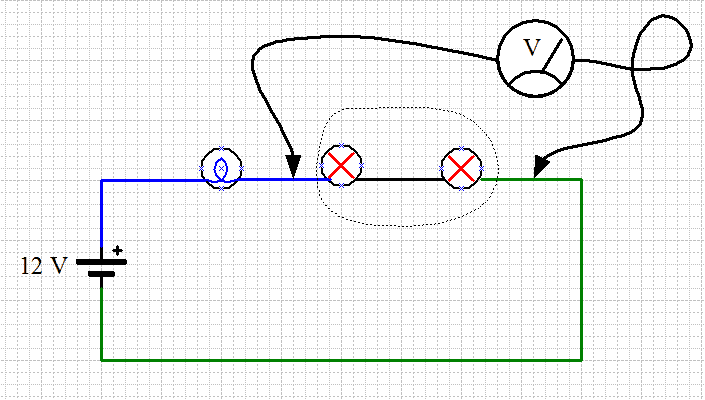 The volt meter connected as shown would read 12 V since it can "see" both terminals of the battery via continuous paths. If you were to move either lead of the voltmeter to a connection inside the dotted area, that is, in between the circuit breaks caused by the broken lamps, then that lead could no longer "see" a path to the battery.

Related Threads on Broken lamps in a circuit

What happens to a lamp in series if lamp in parallel is broken?

Voltage across a broken lamp

Faulty lamp because it short circuit

Analyzing Electrical Circuits -- Which lamps will have current flowing through them?

Lamp Hanging in an Elevator