I just bought one for me and all of the math teachers I know.

Cheap price too compared to if you were going to buy an original!
Last edited by a moderator: Apr 24, 2017

Ya but nothing is more geeky then a self built slide rule right?
turbo
Gold Member

No more slide rules for me. 40+ years ago, they were the only game in town, but after you have spent hours and hours every night grinding out problems on one, they get pretty tedious.
Proton Soup

oddly enough, i never used a slide rule. but it's pretty cool that you can get them so cheap, now. might be a fun way to teach logarithms in high school.

Proton Soup said:
oddly enough, i never used a slide rule. but it's pretty cool that you can get them so cheap, now. might be a fun way to teach logarithms in high school.

Why not just get an abacus and replace your car wheels with limestone?
BobG
Science Advisor
Homework Helper

I still use slide rules.

They take a little more strategy to solve problems than a calculator does, but they're faster than a calculator once you get the hang of them. You have to break that idea that all problems have to be in a format of (73)(45) = x before solving them. Most times, it's faster to solve your problem when the variable is buried somewhere in the middle of the equation. I know I want my answer to be 45, so I'll just scan down the scale for all the division problems that equal 45 until I get to 73 and then see what I had to divide by.

You have to buy a good graphing calculator before you reach a point where a calculator is capable of solving more types of problems, as well. I can solve problems with complex numbers, solve quadratic equations, do coordinate transformations from Cartesian to polar (or even spherical) - all things the cheaper calculators can't do. Of course, my TI-86 can solve cubic equations, or even higher powers. It can solve matrix problems, do cross products, etc, all a lot faster than you can on a slide rule. Plus, the graphing functions can make it easier to find roots for equations, area, etc than actually solving the problem.

Of course, you run into the same problems with slide rules that you do with calculators. As they get more elaborate with 20 some scales that make it quicker to solve different types of problems, you can forget the basic scales worked just as well at getting you an answer. Calculating something like the doping concentration of a semi-conductor can throw you for a momentary loop when you're working with numbers higher than your beloved log-log scales go.

You get a basic simplex slide rule with an A, B, C, D scales, a base 10 log scale, and your trig functions, Tan, Sin, and small angle Tan/Sin scale, you're really good to go for just about any problem. I still like my N4-ES vector hyperbolic dual base speed rule with it's 34 scales.

Slide rules were status symbols before advent of calculators in 70-ies. The more mathematically advanced section in school you attended, the more advanced and
expensive slide rule you must have. Some were careful letting their slide rule protrude out from pocket or briefcase, showing their status and expected successful career.

In mid 70-ies I changed to circular slide rule, that was more handy sized for pockets.
Although some drawbacks, they had longer scales compared to size and not the least you never needed shifting because you never ran out of scale.

But at that time the electronic calculator rapidly replaced slide rules and earlier expensive slide rules were sold out cheaply - I bought a lot of such bargain slide rules
of different kind.

Regarding calculators I am astonished the several-button system has survived. I thought
one- or few-button solutions should replace. There are a lot of possibilities - but for some reason only the traditional several button system appear still exist for calculators
Cyrus

I'll stick to my aeronautical E6B when im flying 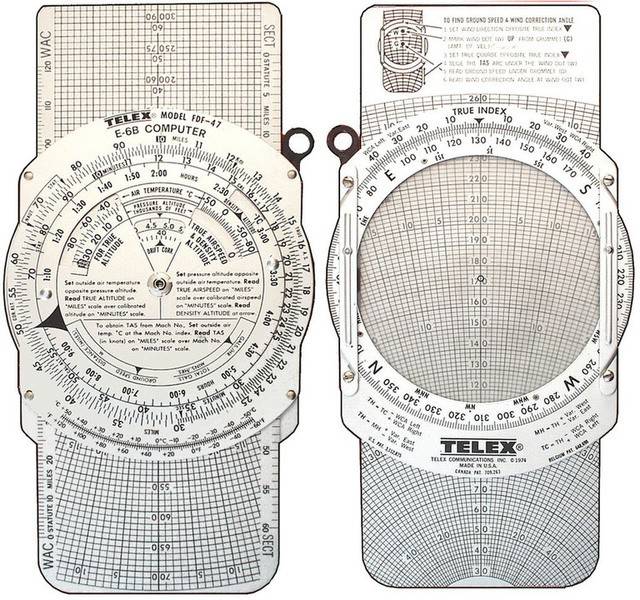 I was in high-school when the first 4-banger (+-x/) calculators came out. No memory, and they cost over $500. If you were caught with one on school property (even in the glove box of your car), you were expelled on the spot. We did use slide-rules, though. I kind of miss mine, even though I avoid math like the plague.
I think that I might have been the first to realize that if I greased up the rails and hooked up a good rubber band, I could nail someone in the forehead at over 50 feet with that slide.

edit: Oooh, Cyrus. That do bring back a memory or two, although I had only the basic Cessna flight computer. I have the mathematical skills of a tree, but I could work wind vector triangles like a demon.
MotoH

I bought a full sized e6-b last night. It looked cool and I plan on taking flying lessons coming up this summer or next. I dont know if I will need it, but still a cool thing to have.
Danger
Gold Member

MotoH said:
I plan on taking flying lessons coming up this summer or next.

You will never regret it. Just remember that you don't fly or drive an aeroplane; you wear it. Once it becomes a part of your body, there's no going back. Best of luck to you in your training and future piloting.
Born2bwire
Science Advisor
Gold Member

I've got my dad's old slide rule from college. It's a nice quality one. I really would like to get a Curta though. http://en.wikipedia.org/wiki/Curta_calculator

Cyrus, whenever I see a circular sliderule I always think of this: http://www.youtube.com/watch?v=hPJn0QJPaoc#t=1m10s
Last edited: Mar 13, 2010
Share:
Share

Why a slide rule is better than a computer
2

Words of wisdom from my college slide rule instructor:

Planning to Buy a Scooter
3