Chris Duston's talk on this starts at minute 43 of this video: http://pirsa.org/13070085
If you download the slides PDF first, Chris' slides start at 49/89 of the way, about half way down the PDF file side-rail slide. So you can get to his slides quickly.

On the video it takes a little longer---you can speed things up by nudging the buffering a couple of times. If you nudge the buffering you can get to minute 43 in about 4 or 5 minutes.

this is work co-authored with the splendid Caltech mathematician Matilde Marcolli.

By Alexander's theorem (1920) a spin network can determine the topology of the 3D space, if it simply has some extra edge-labels that refer to the permutation group on 3 letters, a cute kindergarten group with 6 elements. The permutation group on 3 letters is usually denoted S3 and the 3d SPHERE is often denoted S3, so we have a near dog-pile of notation here, but it's really not hard to keep track of it.

With the extra S3 group label on the edges the whole previous spin network stuff still goes thru, according to Duston.

Any compact oriented 3-manifold can be described as a branched covering of S3, branched along a graph.

=====endquote======
Well a spin network in LQG is just a labeled graph, normally labeled with SU(2) group representations, so all that Matilde, Chris, and friends need to do is add labels chosen from this little 6-element permutation group and they seem to have control of the topology.

That's somehow interesting because something that seems to worry people is what happens to apple pie, unitarity and motherhood when a black hole forms in your favorite bulk. There was this big firewall fuss at KITP the past couple of weeks. It seems like a good thing to take control over the bulk's topology to some extent. (Something Hawking said in his bet concession speech in Dublin, some years back, even suggests the need for quantum grip on whether or not hole forms, regardless if what he said made sense generally there was that hint.)
marcus
Science Advisor
Gold Member
Dearly Missed

Here is a picture of Chris' coach in this topology-encompassing spinfoam business.
Notice that she is wearing the right shoes. One feels instinctively that she is right about quantum topology in the Loop geometry context. 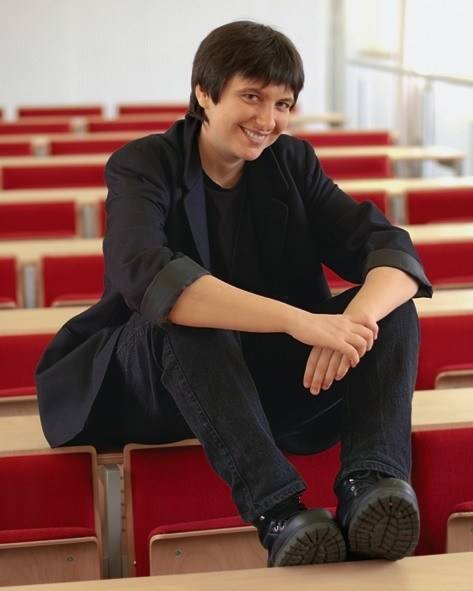 marcus said:
Here is a picture of Chris' coach in this topology-encompassing spinfoam business. Notice that she is wearing the right shoes. One feels instinctively that she is right about quantum topology in the Loop geometry context.

I see two shoes close together - is she hinting at parallel universes?
Harry Wilson

Footnote b, on page 62/89 of the slides PDF is a reference to exotic differential structures work by TORSTEN who sometimes posts here at PF. Actually all 3 footnotes (a, b, and c) are somewhat interesting.
So I will copy from that slide.

==quote from Chris Duston's slides http://pirsa.org/13070085 ==
Can think of this as a modification of the construction of LQG.

BTW levity aside, I reckon Marcolli as an outstanding mathematician with a lot to say about physics. She has some highly interesting papers with Alain Connes and with a guy at Nijmegen named van Suijlekom, as well as ones with her own grad students, Caltech postdocs etc.
When the Loops conference organizers posted their program for the July 2013 conference the one flaw I noticed was they didn't have a plenary talk by Marcolli.

they had Bill Unruh, Fay Dowker, Renate Loll, Vincent Rivasseau, but they missed Marcolli. It only dawned on me later that they did have Chris Duston giving one of the 20-minute parallel talks and it was about the work Marcolli is involved in that is perhaps of the greatest interest to Loop researchers.

The other choice of a Marcolli co-author would have been van Suijlekom who has been studying a way to realize the standard model of particle physics in spinnetwork context. For instance:
http://arxiv.org/abs/1301.3480
Gauge networks in noncommutative geometry
Matilde Marcolli, Walter D. van Suijlekom
(Submitted on 15 Jan 2013)
We introduce gauge networks as generalizations of spin networks and lattice gauge fields to almost-commutative manifolds. The configuration space of quiver representations (modulo equivalence) in the category of finite spectral triples is studied; gauge networks appear as an orthonormal basis in a corresponding Hilbert space. We give many examples of gauge networks, also beyond the well-known spin network examples. We find a Hamiltonian operator on this Hilbert space, inducing a time evolution on the C*-algebra of gauge network correspondences.
Given a representation in the category of spectral triples of a quiver embedded in a spin manifold, we define a discretized Dirac operator on the quiver. We compute the spectral action of this Dirac operator on a four-dimensional lattice, and find that it reduces to the Wilson action for lattice gauge theories and a Higgs field lattice system. As such, in the continuum limit it reduces to the Yang-Mills-Higgs system. For the three-dimensional case, we relate the spectral action functional to the Kogut-Susskind Hamiltonian.
30 pages

Incidental semantix: Quiver is the technically correct term for the type graph used in LQG for defining spin networks. Loop people simply say "graph" but in more precise terms they are talking about a directed graph (the edges are "arrows") and there can be more than one arrow connecting a given pair of nodes. that is what the mathematicians have dubbed a quiver. So to be exact the quantum states of geometry in LQG are actually based on quivers (not graphs).

Marcolli Suijlekom call their generalized spinnetworks "gauge networks". A gauge network sports enough NCG structure to enable it to take the Standard Particle Model on board.
===============

So that's interesting because Marcolli has two LQG generalizations going, one with Suijlekom which is aimed at putting particle physics on a Loop gravity basis, and the other with Duston and others which adds TOPOLOGY CHANGE to Loop gravity. Here in case anyone is curious is a sample paper from that research line:
http://arxiv.org/abs/1308.2934
The Fundamental Group of a Spatial Section Represented by a Topspin Network
Christopher L Duston
(Submitted on 13 Aug 2013)
We present an algorithm which determines the fundamental group of a spatial section using topspin networks. Tracking the topology of the spatial section is a unique feature of this approach, which is not possible in standard Loop Quantum Gravity. This leads to an example of spatial topology change in a smooth 4-manifold represented by a topspin foam.
7 pages. Based on work presented at the LOOPS 13 conference at the Perimeter Institute

I see that Duston is now at Stonybrook. Earlier he was at Univ. Florida (where Marcolli was before she moved to Caltech).
Last edited: Sep 2, 2013
marcus
Science Advisor
Gold Member
Dearly Missed

CORRECTION: The additional labels which I said came from S3 the permutation group on 3 letters, a group with 3! = 6 elements---that was a simplified "toy model" case which Duston uses in his presentation. I should have said Sn the permutation group on n letters, with n! elements. A more complete story on "topspin networks" is given in a 2010 paper by Denicola, Marcoli, Zainy which Duston references in his talk.

http://arxiv.org/abs/1005.1057
Spin Foams and Noncommutative Geometry
Domenic Denicola (Caltech), Matilde Marcolli (Caltech), Ahmad Zainy al-Yasry (ICTP)
(Submitted on 6 May 2010)
We extend the formalism of embedded spin networks and spin foams to include topological data that encode the underlying three-manifold or four-manifold as a branched cover. These data are expressed as monodromies, in a way similar to the encoding of the gravitational field via holonomies. We then describe convolution algebras of spin networks and spin foams, based on the different ways in which the same topology can be realized as a branched covering via covering moves, and on possible composition operations on spin foams. We illustrate the case of the groupoid algebra of the equivalence relation determined by covering moves and a 2-semigroupoid algebra arising from a 2-category of spin foams with composition operations corresponding to a fibered product of the branched coverings and the gluing of cobordisms. The spin foam amplitudes then give rise to dynamical flows on these algebras, and the existence of low temperature equilibrium states of Gibbs form is related to questions on the existence of topological invariants of embedded graphs and embedded two-complexes with given properties. We end by sketching a possible approach to combining the spin network and spin foam formalism with matter within the framework of spectral triples in noncommutative geometry.
48 pages, 30 figures.
Share:
Share