Not quite sure how central angles ended up in a PreCalc class, but oh well.

Okay so, I'm given this picture 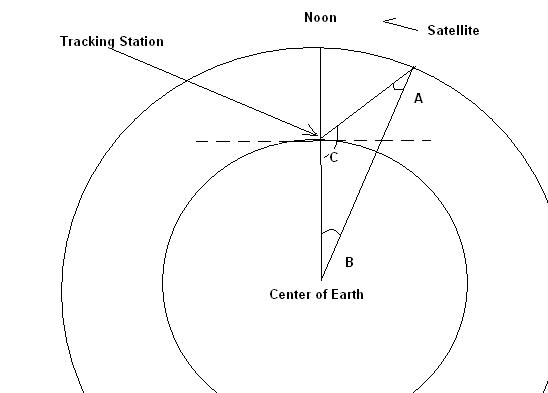 A satellite is in orbit 2000 kilometers above the Earth.
It is scheduled to pass directly over a tracking station at noon.
The satellite takes 2 hours to make one orbit.
The tracking antenna is aimed 30º above the horizon.


After having someone already try to explain this to me, I used the law of sines and cosines and ended up with this equation. Everything is starting to look all the same and I'm just getting so frustrated. Any help would be appreciated.

I plugged in 120 for sin a and cos a, and the whole thing comes out to be zero. Which isn't one of the possible answers.

Presumably you are given the radius of the earth, right? Call it R. Why not just use the law of sines:

If you know R, use this to solve for angle a and you can figure out the third (central) angle.
amanda_

Actually finding the radius is a completely different question, but if I did that correctly then it's 6,378. But when I plug that into the equation you gave, it didn't match any of the answers.

Please help me with my precal homework