The pre-lab is based on the following lab: http://iws.collin.edu/mbrooks/physics/experiments/PHYS 2425 Exp 7 Manual.pdf

Moderator edit: Extract of an image from the PDF showing the mechanism under discussion: 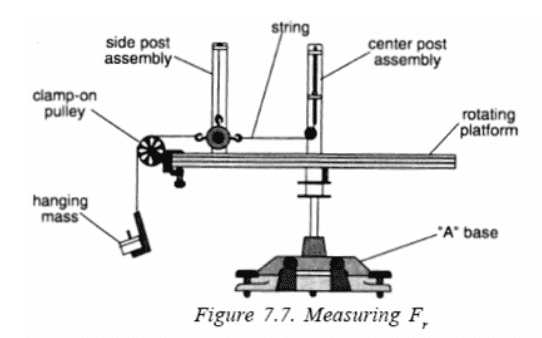 2. Why is it necessary to level the rotating platform? How would the motion of the revolving mass be affected if the base were not level? Explain.

3. Why is it important that the string attached to the revolving mass be parallel to the platform? Explain.

4. A mass m=100g is attached to a spring connected to a rotating platform. The platform is then rotated such that the centripetal force acting on the mass is supplied entirely be the spring. The period of rotation T is measured for each of a series of rotating raii r, while keeping the spring force constant. The data is displayed in the graph below ( y=.8626x, the y is T^2 in s^2 and the x is r in meters).
a) From this graph, what is the force of the spring?
b) What would be the slope of the graph if the rotating mass was reduced to 50 g?

2. I understood that the rotating platform needed to be leveled since the lab tables are not leveled. Would the motion be affected because it would be at an angle because of gravity?

Thank you in advance
Last edited by a moderator: Mar 7, 2017

What do you think? We are not grading you, so draw the free body diagrams that you think are correct and we will point out any problems with them.


doggydan42 said:
2. I understood that the rotating platform needed to be leveled since the lab tables are not leveled. Would the motion be affected because it would be at an angle because of gravity?

Again, what do you think? Can you picture in your mind what the motion would look like if the platform were not level?

You have the graph, we don't. We cannot help you figure this out if we don't know what it looks like.
andrevdh
Homework Helper

1. you need 2 drawings indicating the forces on the mass with the three hooks when the platform is rotating, both with the spring attached and when it is not attached

3. the tension in the string from the spring need to supply the centripetal force, but if it slopes say upwards towards the central post .....

Find the acceleration in circular motion

Help with, I am sure, a really simple circular motion problem