Two identical cylinders of mass M and radius R are mounted on frictionless axles as pictured above. Around each cylinder a massless thread is wound. The hanging thread on the left is wound around a third identical cylinder. A box of mass M is attached to the hanging thread on the right. Both systems are released from rest. After the cylinder has fallen a distance of 8.0 meters, it will have a translational speed of ____ m/s. Use 10 for acceleration due to gravity. 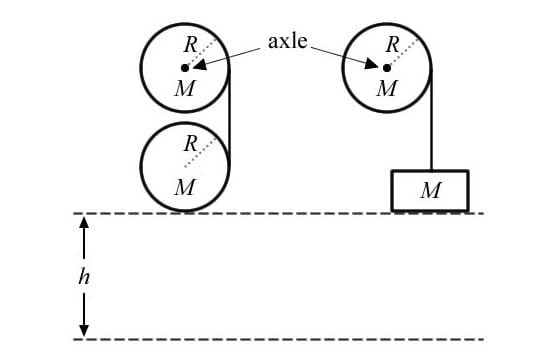 On a side note, the system on the right was used for a previous problem.. hence its uselessness.

I tried an approach using Newton's second law and summing the forces that act on the cylinder that is falling.. but attempting that got me down to 1=1 (yay). My friend claims that a conservation of energy approach is the way to go, but I really don't know where to start. If someone could push me in the right direction, that'd be wonderful. This is, apparently, the hardest problem that my AP Physics class will encounter all year (according to the instructor).

Your friend is right about conservation of energy. You should think about the relationship between the translational kinetic energy of the cylinder and its gravitational potential energy. Once you've figured that out, try comparing the situation before and after the cylinder is released.
Oscur

Oh and welcome to the forum!
BlameTruth

So would I be safe in saying that:

Where omega sub 1 is the angular velocity of the falling cylinder?

Where omega sub 2 is the angular velocity of the stationary cylinder?
Oscur

Ok, I might be wrong, but seeing as the question asks only for translational velocity, and the radii of the cylinders are not given, I would go as far as to say that the part of kinetic energy that deals with rotation of the body is unnecessary.

I think you can simply put:

where h here is the change in height and rearrange to find your answer.
BlameTruth

I've thought carefully about this because I don't want to send you down the wrong path, and I'm pretty sure that as they ask only for translational energy, you only need worry about the downward movement of the centre of mass of the lower cylinder in a straight line.
BlameTruth

Then I can solve that for omega and plug that into:

Any holes in my solution? :/
Oscur

Sorry, BlameTruth is right and I made a mistake. From what I can tell, your solution should work.
Share:
Share

Find the acceleration in circular motion

Acceleration of the cart on a ferris wheel (Circular Motion)

Torque formula derivation for a particle moving in circular

Help with, I am sure, a really simple circular motion problem