I have been told that relative velocity can be negative on this forum, so i would like to ask a few questions based on this.

O sees O' approaching at v=0.5c and vice versa. The vector of the velocity is however pointing towards the back/negative x axis. So would the relative velocity be rather v=-0.5c in this case?

What about the case when they exactly meet. What would be the relative velocity in this case?


scenario 2) Observer O is looking at observer's O' back while approaching. O' has his back turned towards O while he is approaching from behind.

It depends which way you wish to define it. The signs do not matter in any absolute sense - it's all just book keeping. If you flip your directions around the +v will become -v, but nothing changes about the actual situation you are describing. So pick a convention and stick with it. I'd recommend sticking with standard conventions where available because then you can use standard results and standard tools.

The system you were proposing in your other thread was not a standard system and was substantially more complicated (because you have to keep track of all the parity flips), and didn't add anything over the standard set up. In fact, if I understood Peter correctly, it rules out the use of some more powerful mathematical tools. But, as long as you are happy to stick to simple cases and to accept a higher error rate from book keeping trouble, it'll work because it's just a different book keeping convention.
PAllen
Science Advisor

Now let's try the velocity of observer one relative to observer two. Using coordinates in which observer two is at rest (these are different coordinates so I need to call them something different - we'll use ##x'## and ##t'##) write the position of observer one as a function of time: ##x'(t')##. The relative velocity of observer one relative to observer two is (by definition!) ##v'=\frac{dx'(t)}{dt'}##. This will be positive or negative depending on whether ##x'(t')## is increasing or decreasing with time, and it is the same no matter which direction the two observers are facing and no matter whether one is behind or in front of the other.

Ibix said:
It depends which way you wish to define it.

Alright then. Let's have a look at how it is defined in the case of minkowski diagrams. 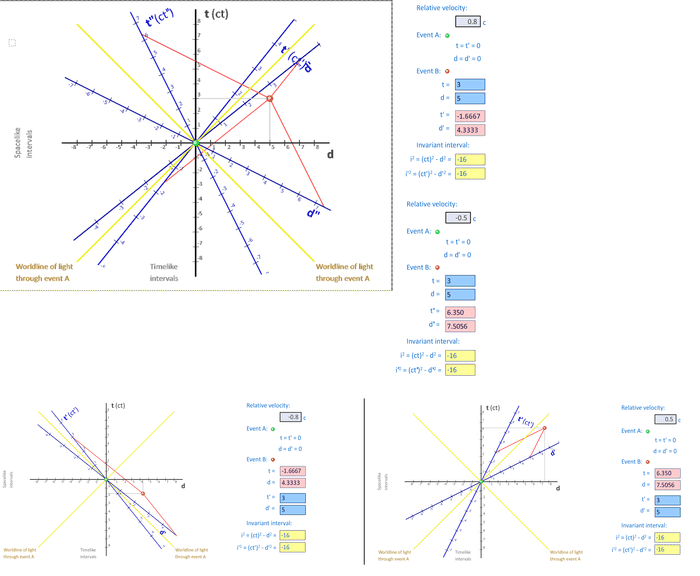 The relative velocity can be negative obviously in this case, but it is a fixed value. It does not change depending on if any observers are approaching or moving apart from each other.

The two diagrams at the bottom, show the scenario from the perspective of O' and O'' respectively.

O' would be an observer who is facing the back of O while approaching from behind him, does the measurements just when he passes by O and then moves away having his back turned against O.
Hence, O is moving towards the negative x axis from the perspective of O. The velocity vector is negative.

The inverse Lorentz formula was not needed at all. What changed is the relative velocity. The relative velocities are different depending on the perspectives. Both bottom minkowski diagrams use the non-inverse formula to arrive at the correct values.

Using the same logic, i am going to attempt going from O'' to O' now.

Since all three observers are moving in parallel, the scenario seen by O'' should be as follows:

O'' has his back turned against O'. O' is facing the back of O'' and is approaching him from behind. When they pass by each other, they do their measurement and O' moves away towards the positive x axis. Hence, the velocity vector is positive from the perspective of O''.

Unfortunately the site i drew those on, does not allow values higher than 0.8c so no pretty diagrams for this case.


Now the reason the relative velocities are different for observer O and O' or any other combination between any two of the observers O,O',O'' is because the cases are not symmetric.
To be symmetric, they would have to be either both facing each other while approaching and having their backs turned against each other while moving away(or the other way around for the 2nd symmetric case).
In the first case, the relative velocity would be negative for both while in the latter case it would be positive for both.

Not sure it would be possible to draw minkowski diagrams like the one on top for the symmetric cases though. Doesn't seem impossible however. I would have to give this more thought.

I created those diagrams using this site http://www.trell.org/div/minkowski.html,

When i use the term "facing" i mean he is facing towards the positive x-axis. It determines how the observer defines his positive and negative x-axis.(when he does a measurement)
Last edited: May 16, 2016
Vitro

Jeronimus said:
The inverse Lorentz formula was not needed at all. What changed is the relative velocity.

But you didn't just change the sign of the velocity, you also re-labeled your frames. In the bottom diagrams which you call the O' and O" perspective you're actually flipping the primed and unprimed frames.

You are right but i thought i would spare myself all the editing in some paint program and use the output i got from http://www.trell.org/div/minkowski.html directly. I thought it would be clear enough what is meant still.
PeterDonis
Mentor
Insights Author

No, it does not. You will continue to confuse yourself until you learn how relative velocity is defined and then use the correct definition: Pick a coordinate system in which one of the objects we're considering is at rest; the relative velocity is the time derivative of the position of the other object. The "perspective" of various observers is irrelevant, as is the way that we draw Minkowski diagrams.

Your best bet may be to go back through your previous thread and this one from the beginning, reading carefully until you find something that you either disagree with or don't understand. At that point you are being misled by a mistaken assumption - stop right there and try to identify that assumption.
PeterDonis
Mentor
Insights Author