I have posted this here for two reasons, one I think you all will really appreciate this
as a teaching tool to hopefully increase your students understanding (and hopefully
grades) & second because you all might find/make more concept maps on more
advanced topics or with focus shifted in a different direction (i.e. a concept map
of theorems for example!). Please if you ever come across or make anything of the sort
please share it here & we'll hopefully amass quite a collection. References to books
containing concept maps more than welcome too!

I have become convinced of the power of concept maps as a way to
truly understand a subject. Please allow me to convince you with this
opening post then as payment for this miraculous gift I am giving you
I merely request you make/give/find me concept maps on areas of
mathematics such as:

Here's an elementary image of a concept map in real analysis: 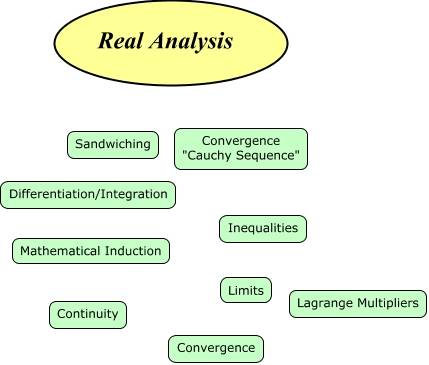 Not very convincing is it? Not very powerful or illuminating, I mean you
can look in the cover of your book & see this & it's probably the image of
a concept map a lot of us would think of, something not very informative.

However, look how powerful a concept map can become!

If that one didn't convince you it's probably because there was some
detail missing in it, here's a more complete version:

Now, there may be a few bits and bobs missing, still if you were able to
approach the subject knowing that this is the general form you're striving
for with 1st order ode's that are solvable without recourse to numerical
methods you'd be pretty confident!

I took those pictures from this pdf file, there are more concept maps in it
on differential equations. Looks just fantastic!

Still, these concept maps illustrate the complexity of the subjects you're
trying to master, it's bad enough meeting all these new concepts in one
go but you also have to make sense of how they all fit together & how
they interconnect. Here is a drastic illustration of the complex web of
interconnectedness a subject (Linear Algebra) can contain:


(Download that picture or use firefox zoom or something to examine
that beast! taken from here). Still, I've actually learned from just looking at that
picture! Made sense instantly!

Still, a theorem-interconnectedness concept map would be even more
useful & revealing! For example in my naivety I didn't fully understand
how a subspace of a vector space can be validated just by using λa + b,
I mean there's a nice way to build up to that by proving, I think, two or
three previous theorems.

Now, I want to emphasize the main reason why I think this is so important is because
it illuminates why a book is structured the way it is. In electromagnetism, a subject I
have yet to study properly, I have been slowly finding out about it but a lot of it is in
the dark & I don't have the time to do it properly. Still looking at the following concept
map 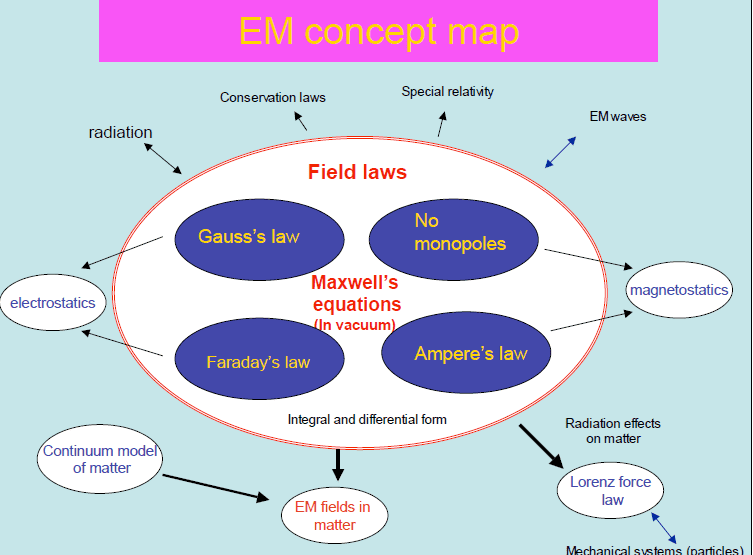 and more of it makes sense now (that Gauss & Faraday are for electrostatics &
Amere is for magnetostatics, taken from here). This is tiny but that's because the concept map here
contains nothing compared to the differential equations map above! I'd make more
connections if the map was better! It would just clarify why the book is structured the
way it is, I know nothing substantial about E&M, nothing, but if I can get some grasp
on where I'm going as regards concepts it would help. This is universally true, in
advanced mathematics especially! Something like this:

contains info on where you're going in elementary mechanics, but I mean concept maps
on moment of inertia in various situations, or friction situations etc... could be made
too! That's the stuff people have trouble with & for which a map would help make
sense out of!

Hopefully I've made my case, I'd be interested in opinions on this, here are a few of
the links I've found that contain useful info & maps that some people might appreciate:

I am not convinced about the greatness of concept maps. They look great and make everything seem so simple yes, but they are not something to just give the students. The simplicity is alluring yes, but sadly it doesn't really make people learn more effectively.

Here is a study that shows that just reading the book and from time to time put it down to think about what you read beats concept mapping in long term retention handily, even though the students who used concept mapping thought that they learned more:
http://www.sciencedaily.com/releases/2011/01/110121111216.htm
sponsoredwalk

Did you read the paper you linked to?

Concept mapping is considered an active learning task, and
it serves as an elaborative study activity when
students construct concept maps in the presence of
the materials they are learning. Under these conditions,
concept mapping bears the defining characteristics
of an elaborative study method: It requires
students to enrich the material they are studying and
encode meaningful relationships among concepts
within an organized knowledge structure.

In the repeated study condition, students studied the
text in four consecutive study periods (8). In the
elaborative concept mapping condition, students studied
the text in an initial study period and then created a
concept map of the concepts in the text. The students
were instructed about the nature of concept
mapping, viewed an example of a concept map,
and created their concept maps on paper while
viewing the text. This is a typical way that concept
mapping is used as an elaborative study activity
(16–18).

This is very different from what I have been asking for. I am not advocating that a
student make his/her own concept maps. I think that is a waste of time to be frank.
The paper is right to challenge that idea, I don't think a student making their own
concept maps is a particularly good idea, it may help but I don't think it's that good.
Maybe I should have been clearer but my emphasis was on concept maps that are
well done & I pointed out the flaws in poorly done concept maps in that post!

What I've asked for is professional concept maps, serious ones done by people who know
what they're talking about & can illustrate the links between concepts in a subject so as
to avoid losing the forest from the trees & having some form of structure to adhere to
when given a huge chunk of new material to study - it would benefit me & all of your
students being given tools like these (when actually done right with serious detail
encapsulated in a small volume such as in the Diff Eq map). For instance in this one:

I can see there are some issues with it but also, after struggling to understand why
atlases/charts etc... are referred to in Differential Forms, or what the deal with
Banach spaces & Hilbert spaces is, or the relationship between manifolds and tensors,
I now feel a lot more confident about where I'm going with all this material. I'm not
joking you I've been worried about this stuff for a long time! I'd love both broad &
detailed concept maps to be made on every subsection of every topic in that picture.

I think that pre-made concept maps in more advanced areas of mathematics given to
students who are struggling to make the connections that need to be made (such as I
am currently struggling with doing!) would benefit enormously from having this
additional aid.

Please make them for us & give them to your students - you literally could run
pedagogical experiments over the course of a few semesters based on the wide
use of serious concept maps & judge the results! I'd do it if I were in that position.
If any of you do please cite me 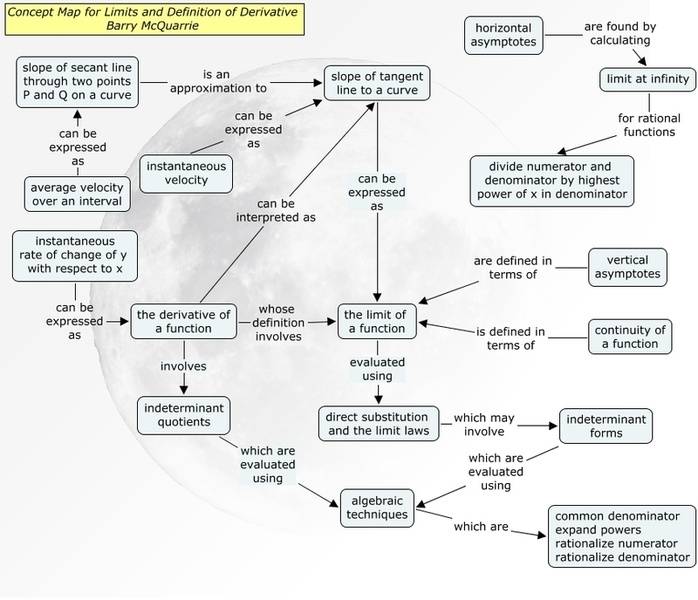 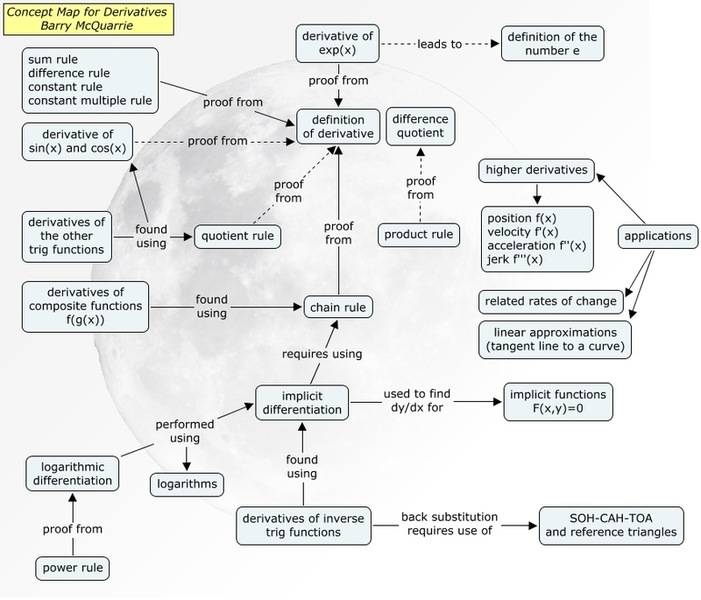 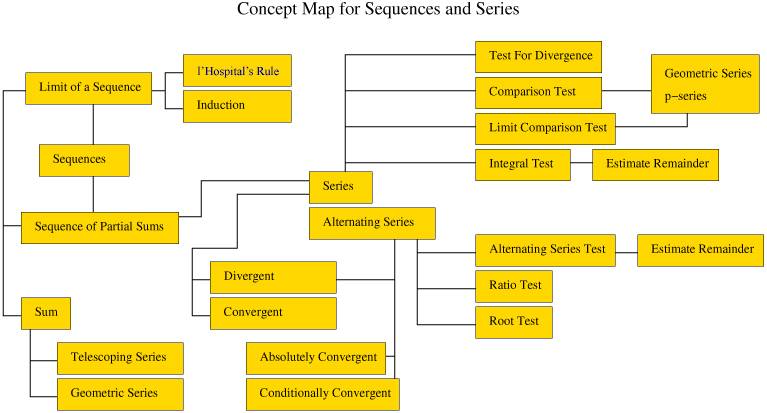 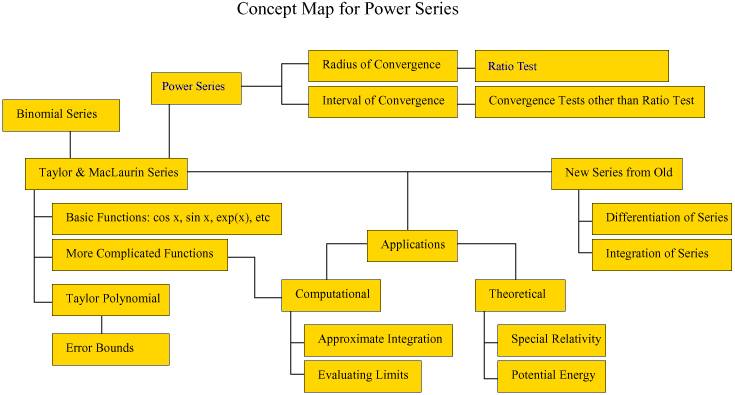 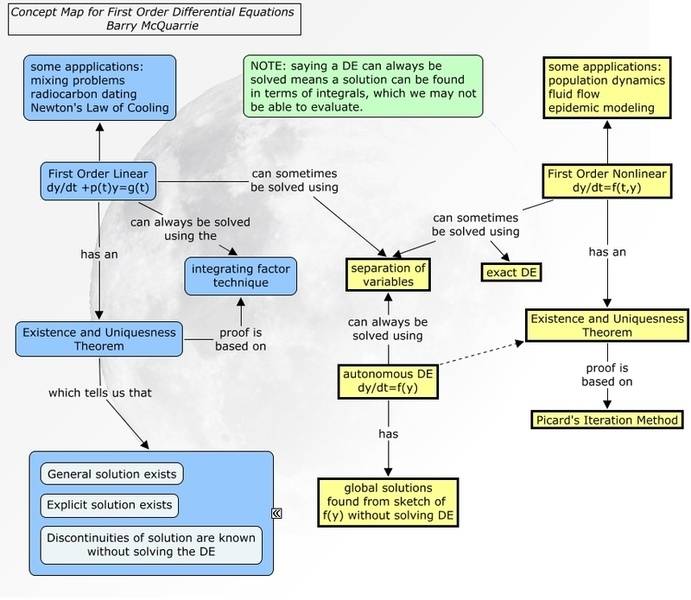 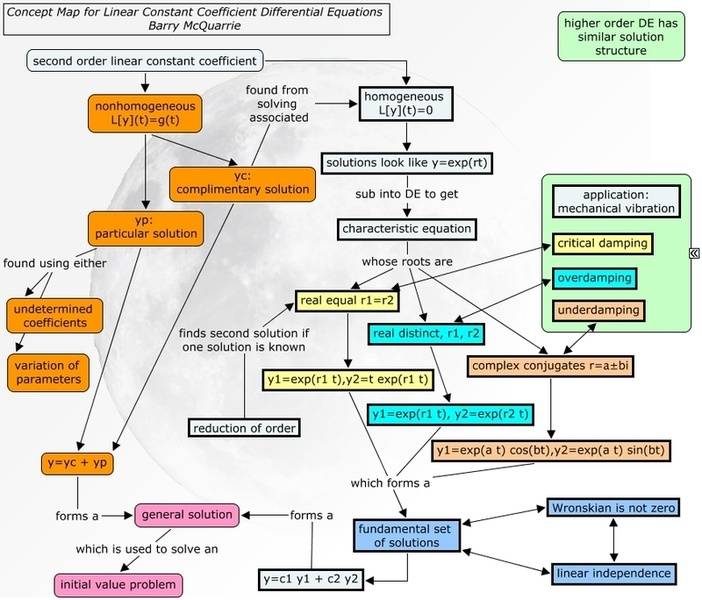 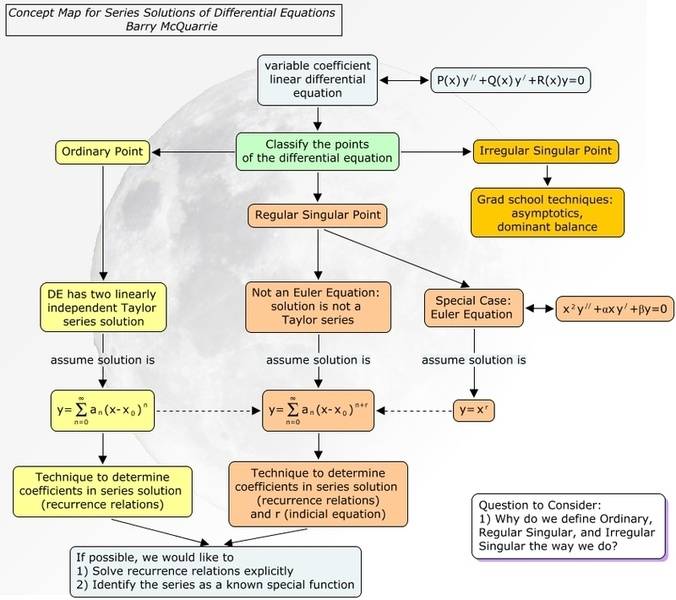 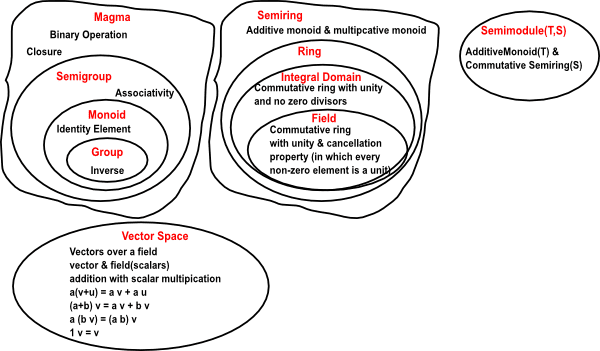 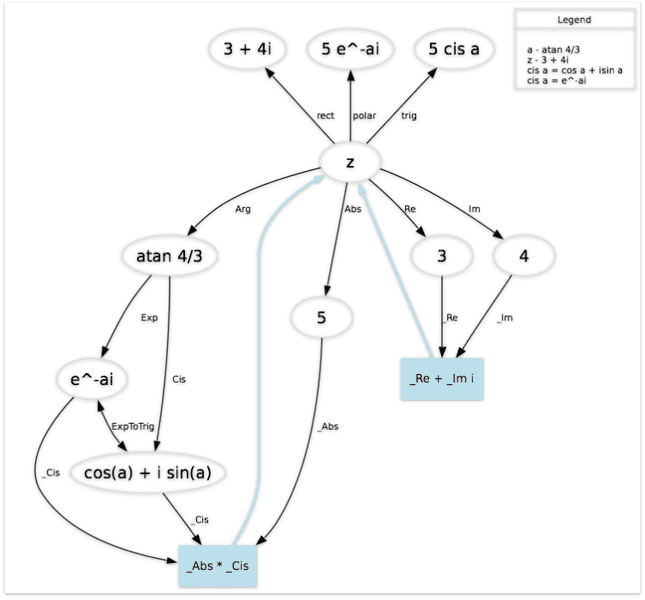 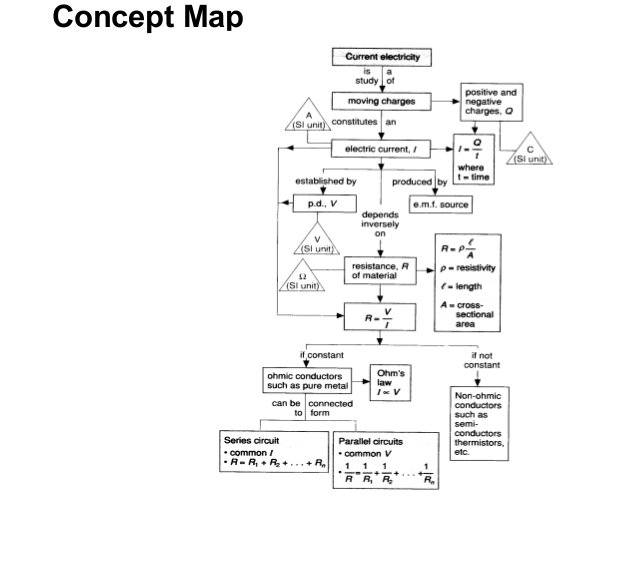 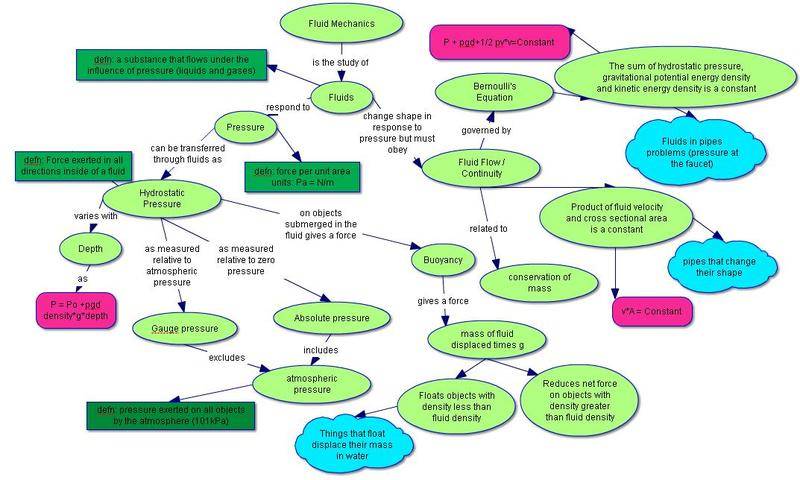 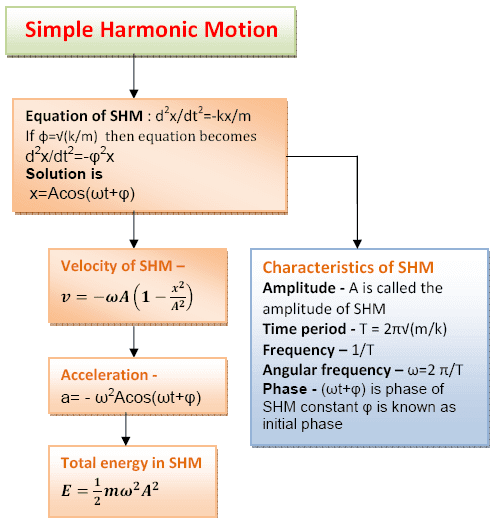 sponsoredwalk said:
This is very different from what I have been asking for. I am not advocating that a
student make his/her own concept maps. I think that is a waste of time to be frank.

There is only one purpose in making concept maps, IMO, (and they can be of huge benefit) and that is the process of making your own.

Once you have made your own, you can throw the "art-work" in the trash. What matters is the thought that went into constructing it, not the pretty picture.
sponsoredwalk

There is only one purpose in making concept maps, IMO, (and they can be of huge benefit) and that is the process of making your own.

Once you have made your own, you can throw the "art-work" in the trash. What matters is the thought that went into constructing it, not the pretty picture.

Strong students will make good concept maps, weak students will make weak concept
maps. The chances that a weak student will see connections between bubbles that
represent concepts is drastically reduced by the fact that a weak student may not pick
the right material to put into the bubbles, may focus on unnecessary material to put in
the bubbles etc... Furthermore what if someone misses something? It takes a bubble
literally 1 second to correct that! Look at the complex web of interdependence in that
linear algebra picture above & explain to me how it would hurt a "weak" student who
failed to notice the connection between concept A & concept B, or was memorizing
all these different concepts as separate entities not realizing the interdependence
goes so deep, I'd like to hear it. Please tell me how there is no benefit in giving a
student a pictorial representation of the interdependence of topics in graph sketching
in calculus as is given above. I think it's obvious that students use the wrong technique
in the wrong place because they don't know what goes where because being barraged
with so many concepts in such a small place can be overwhelming, please tell me the
way no one benefits from a clear picture explaining the interdependence of topics in a
consistent fashion that allows a student to sit back & think about WHY bubble M is
connected to bubble N since they didn't make the connection by reading about it.

You're just plain wrong claiming that the only purpose of concept maps is to make
your own. I've explained my reasons above & don't think we need to get into a side
argument about this, professional ones that make clear the connections between
topics, that make clear the interdependence of topics within topics to other topics
within topics etc... can drastically simplify & aid someone studying new material.

I've posted this on another forum where students like me see it & it's certainly
appreciated in the way I'd expect, if it's not being embraced in a similar fashion in
the educators room then that sure says a lot about the disconnect between educators
& students.
Log in or register to reply now!

How Do You Teach Kids Concepts?

What are top 10 physics concepts for middle schoolers?

Insight into the conceptual gap and how to fill it