My mechanics book says that if a rock falls freely to Earth from a certain height than it will be deflected slightly to the east due to the Coriolis force. But I don't understand why. Consider the following Wikipedia picture: 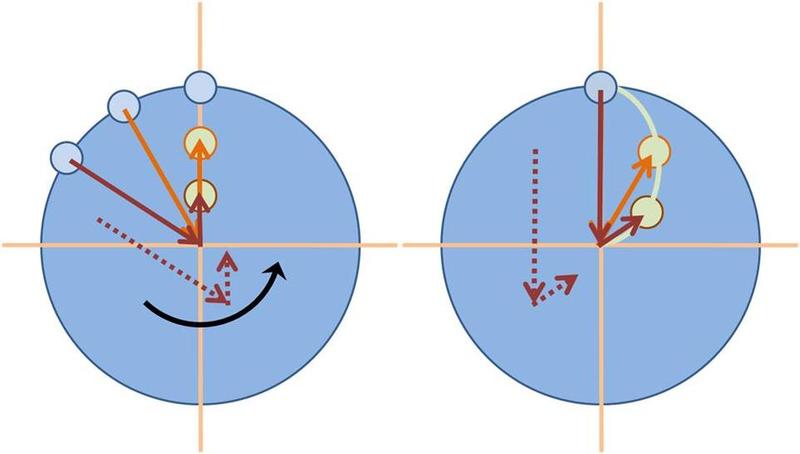 If we imagine that we're looking at the nothern hemisphere from above, than wouldn't this imply that the rock would fall to the west? The Coriolis force would be directed east but that's just the centripital force that causes the rock to spin.
What am I misunderstanding?
Thanks.

I think the picture is showing the (linear) motion of a ball across a rotating surface, as viewed from either frame, and presumably this ball did not start out stationary in the rotating frame.

For the book's scenario, the rock moves closer to the rotational axis, but was initially stationary in the rotational frame. Thus, since no tangential inertial force acts on it, it will have excessive tangential velocity for its new radius, which is to say that (in the time elapsed falling) it will have travelled further east than the ground has.

(Note that I've made some first order approximations here, you should do the exact full 3D calculation yourself, for each frame. Your bit about causing "the rock to spin" sounds like a misunderstanding.)

No ideea what that drawing is.

The Coriolis force is "virtual" but has it's applications.

Imagine a stone falling from a 10 km height. At t=0 the stone is above Point A but as the earth rotates without being able to impart any rotation to the stone then the stone will fall in point B slightly west ( or east :D). There is no true force acting upon either stone or earth but in a assembly the force can have consequences. Again the above stone in a 10 km tube. As the stone falls it will constantly hit (or push) the west side of the tube because of the "virtual" Coriolis force.
Log in or register to reply now!

I Coriolis effect causes in motion of a free falling object

Free Fall vs. Not Free Fall?

I Centrifugal force on Earth and deviation of free falling obj