Creating a Plasma at Home

I want to create a plasma chamber, and so far, I have a vacuum bell.

I have a couple of questions... excuse if I have the terminology wrong.

I would like to create a plasma, and then apply a DC magnetic field, so the electron cloud "separates" somewhat from the gas.

I have many questions.


There are many more questions... yet I can start with this.
I have a mechanical vacuum pump from air conditioning work, which I hope to use for the first vacuum stage.
For further vacuum, I am not sure if to go with an oil-diffusion trap (pump?), or a turbo-molecular pump.

Thank you all for your help!

I really wouldn't recommend trying to make a plasma at home...especially if you're designing your own apparatus. This stuff is dangerous.

Anyway, unless you have some ridiculously strong magnet, you won't be able to "separate" the electron cloud from the ion cloud--there is simply too much attraction between the positive and negative ions for a magnet to separate them more than a micrometer (rough estimation there.) [Edit: At least for the typical plasmas like the examples I list in the next paragraph. I bet there are more obscure examples where you might be able to separate the ions with a dc magnetic field, but this would be a special case.]

If you really want to observe a plasma, why not use something that's been designed by actual engineers to be reasonably safe. A gas discharge tube is a common physics demonstration, and fluorescent lightbulbs are basically the same thing. Probably the most fun plasma-related things available are the "plasma globes" you often see at novelty stores.

Once when I wasn't being too conscious of safety, I decided to repeat a really crazy "experiment" I saw in a video on youtube. Here's the link: http://youtu.be/A7RFyh5ABcQ. Basically if you get a flame going in a microwave oven, for some reason it interacts with the microwaves and forms a cloud of what looks like plasma, which you can keep going in a steady state if you can confine it (in something that won't melt). I'm not really sure what the physics is there, though.
Last edited: Jun 24, 2013
ElectricPaint

Thanks for your reply Jolb!

I realize there are many health hazards involved, yet I will take them into account and deal with them the best I can.

Curiously, your off-hand estimate of separating the electron cloud a micrometer or less... that's enough for the experiment I want to conduct.

I'm going to post a simple schematic later today of what I'm thinking... so I can communicate better my goal (and you guys can tell me if yes, no, maybe, long-shot, simple).

I'm thinking about what you posted...
I think I should now start actually creating a successful vacuum, and keep on going from there.

Here is a sketch of what I was thinking.
Please let me know if I am way off base, or... if this is possible? 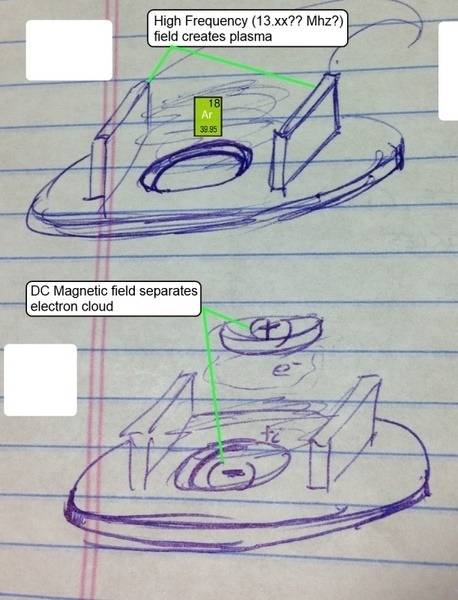 What do you guys think?
Khashishi
Science Advisor

If you have access to a welding machine, the welding arc is basically a plasma.
ElectricPaint

I do believe I am confusing a magnetic field with an electric field.

Can you think of any way where I could get some sort of "electron cloud" going, without interference (minimized) from the positive ions?
Khashishi
Science Advisor

Maybe you can take a cathode ray tube out of an old TV screen.
Bobbywhy
Gold Member


Can you think of any way where I could get some sort of "electron cloud" going, without interference (minimized) from the positive ions?

ElectricPaint, you already know electrons are negatively charged, and that like charges repel. Whenever an electron feels the charge of a neighboring electron it tries to get away! So what you are proposing, an "electron cloud", would require a strong force field to constrain the electrons to stay near one another.

Note also, that the definition of a plasma is NOT the same as that of an "electron cloud". Plasmas normally have a mixture of both positives and negatives so the overall net charge is close to zero.

Inside a cathode ray tube (CRT) there is a stream of electrons moving from the hot emissive cathode towards the positively charged anode. Same as in a vacuum tube amplifier. In neither case is there a stable, fixed cloud of electrons.

Will you please be more specific and describe your planned project, along with your objective(s)? Then others here might be able to give some useful comments and suggestions.

If it's just for fun, I think metal in the microwave makes a plasma, so you could get a chaeap microwave and a fork
karan

I want to design a small model of vasimr at home for my school project. can anyone help me?
Share:
Share

Suggested for: Creating a Plasma at Home

Creating a plasma in air?