I’ve got a general question about wave-particle duality, and the experiments done with slits.
When a laser is beamed through a small slit, we get a diffraction pattern. This pattern is interesting because it contains dark bands. 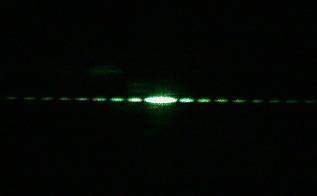 When it comes to explaining the existence of these dark bands, most people invoke the wave aspect of light, and claim that the dark bands are due to photons interfering with each other, and essentially canceling each other out. This idea is analogous to superimposing two sinusoids on top of each other, that are 180 degrees out of phase.
However, experiments done with electrons (and a double slit) produce a similar pattern, even when electrons are shot one at a time. The question then arises, how can a single electron interfere with itself.

Question 1: Is it possible to do these experiments by shooting (and detecting) a single photon?

For the sake of the discussion, let’s assume that it IS, and that we get a similar result with photons (i.e., when shot one at a time, we still get the dark bands).

Question 2: If we claim that these dark bands are a result of “self-cancelling” photons, aren’t we in effect saying that these photons have zero amplitude? If so, isn’t that an oxymoron? I mean, how can a photon exist, and not have any amplitude… and yet still be detectable?

Question 3: If in fact these “dark photons” are theoretically possible, what other phenomena produce them?

Question 1) Single photon experiments have been done and the diffraction pattern does develop.

I'll leave your other questions to others.
IttyBittyBit

Welcome to Quantum Theory, jeffkosmo. What you are thinking about is the wave-particle duality.

You've realized that it's really hard to explain single-slit diffraction using the particle model of photons and electrons. Well, duh. It's this very difficulty (and many others) that led to the idea of wave-particle duality being developed.

To quantify mathman's remark, G.I. Taylor was the first to perform the experiment with a single photon, around 1909 I believe.
xlines

IttyBittyBit said:
To quantify mathman's remark, G.I. Taylor was the first to perform the experiment with a single photon, around 1909 I believe.

Again, I will refer people to the Marcella paper where he derived these wave-like effects purely using QM:

There are also many single-photon interference experiments, and variations to that, that have been done. In fact, this is so common, it can also be done in an undergraduate physics experiment and demo!

(I don't quite agree with the "conclusion" of the last one, but the demo is done well).

I How Dark could Dark Matter get?

Photons and their purpose

I Momentum of photons