newjerseyrunner said:
NEO or ATLAS., they're the most thorough asteroid surveys.

I'm thinking you're referencing The Asteroid Terrestrial-impact Last Alert System when you site ATLAS. From what I've read they were still in proof of concept as recently as last year. They do have a grant, but that only takes them through the design phase and into the first couple of years of operation. It sounded like after 2 years they would need to find additional funds beyond this one grant. They're also operating under some limitations, projecting only a one week warning for objects 150 feet in diameter and a three week warning for a 390 foot object. This is provided that the object in question is not too close to the Sun to be detected.

I see NEO is where you get the 90% statistic from. Of course, if one believes that 90% estimate to be accurate, that leaves a bunch of random objects out there in that dark 10%. All it takes is one. Good thing NEO is part of NASA, they've never had their budget cut. ;)


newjerseyrunner said:
Where did you get the data that scientists think they've only found 30% of NEOs?

From the 2012 article I quoted. The link was at the bottom of the post, but here it is again:
http://www.space.com/18854-newfound-asteroid-close-flyby-earth.html
Beyond that, you'd have to ask Space.com where they got their numbers from.


newjerseyrunner said:
assuming a bell curve, we can figure out what ratio we've found even if we don't know how many there are.

We certainly can try to estimate a ratio. Rough calculations like that can possibly be misleading, though. After all, we have things like the Fermi paradox contradicting the Drake equation, showing how fuzzy speculation and probability math can be. Even our own Solar System is awfully big to be making assumptions.
That said, it's still good to see early detection programs like ATLAS and NEO in motion but from what I can tell we're a far cry from swatting these objects away at a comfortable distance from Earth. The notion of a last minute desperate effort isn't really appealing either. I don't see any reason to change my original position. I think that there needs to be better detection/early interception capability before folks can dismiss the idea of a catastrophic impact to avoid the "duh" scenario I speculated about early on.
newjerseyrunner

The rate at which we discover asteroids is not at all like the Fermi Paradox. There are literally variables in the Drake equation that we don't know, we also have no way of knowing how a more advanced civilization would look and how to see it. Asteroids are just rocks, they glow in IR and if we're seeing new ones at an ever decreasing rate, it's indicative of the fact that we found most of them. We'll asymptotically approach zero and how close we get tells us what percentage are left. While we need more power to find them all, the likelihood is dropping. You'll never get a likelihood of zero, the goal is just to get as close to it as possible. I'd rather have 10% of asteroids unaccounted for than 50%.

Either way, both the US and Russia do have the capability to shoot a nuclear weapon at an asteroid. The bomb would be detonated near the surface, which would cause the surface to vaporize and eject away, acting as thrust and changing it's trajectory. Reliability is another matter.
Daymare

Rubidium_71 said:
Then why do NASA probes always have to use gravity assists to fling our probes to the outer solar system? Not trying to be difficult there, just actually curious.

The main reason is its much easier to accelerate spacecraft by gravity thrust than by burning up fuel.Moreover just imagine the amount of fuel it would take if the voyager was propelled by fuel!!Not very cost effective or practical either.
EnumaElish
Science Advisor
Homework Helper

A planet-sized body can be destroyed by any of the methods described here: https://qntm.org/destroy
Not all are achivable with present technology, and others may require more time than we may actually have between detection and collision.

Changing earth's orbit could itself cause great harm, perhaps exceeding that from the impact if we just let it happen. As long as it's smaller than the moon.*

IMO humanity's best course would be two-pronged: (1) get as many people on space station(s) and hope they survive the blast, and (2) hunker down like never before and keep fingers crossed that not all will perish.
————————————
*quoting from the first link:

Falling at the minimal impact velocity of 11 kilometres per second and assuming zero energy loss to heat and other energy forms, the cue ball would have to have roughly 60% of the mass of the Earth. Mars, the next planet out, "weighs" in at about 11% of Earth's mass

which implies that even a head-on impact with a Mars-sized object will doubtlessly devastate, but not necessarily pulverize the earth.
Last edited: Jul 18, 2016
Noisy Rhysling

How many chunks flying off in what directions in those scenarios? Seem like if we blew a planet up we'd have more problems than with a single body.
EnumaElish
Science Advisor
Homework Helper

That kind of thing nearly got me killed a few times. I'm a fan of accuracy.
Stephanus

Rubidium_71 said:
...For that to even come close to fruition, you must first have that month. Objects like the one over Moscow were not detected while in "deep space"; people didn't know about them until they were already in the atmosphere.

Yeah, I didn't know about the object either until it was already in the newspaper.
newjerseyrunner

Noisy Rhysling said:
How many chunks flying off in what directions in those scenarios? Seem like if we blew a planet up we'd have more problems than with a single body.

The nuclear deflection concept doesn't produce chunks, it produces vapor. The bomb itself doesn't actually push the asteroid much, but it vaporizes the surface on one side, which acts like a rocket.
Rubidium_71

newjerseyrunner said:
The rate at which we discover asteroids is not at all like the Fermi Paradox.

The thing is, both the larger Universe and our own Solar System still have unknowns, despite our best efforts to analyze and quantify.

newjerseyrunner said:
we're seeing new ones at an ever decreasing rate, it's indicative of the fact that we found most of them.

The NEO chart below seems to show a fairly steady rate of discovery, but it's not anywhere near zero yet. Lots of work to do yet, I think. I am skeptical of the 90% stat. Even when we've detected most of them the problem isn't solved. Just because it's detected doesn't mean it's on a leash. These objects can have their orbit influenced by a few different factors and it can be difficult for a project like ATLAS to detect an object if their radiant is not too close to the Sun. 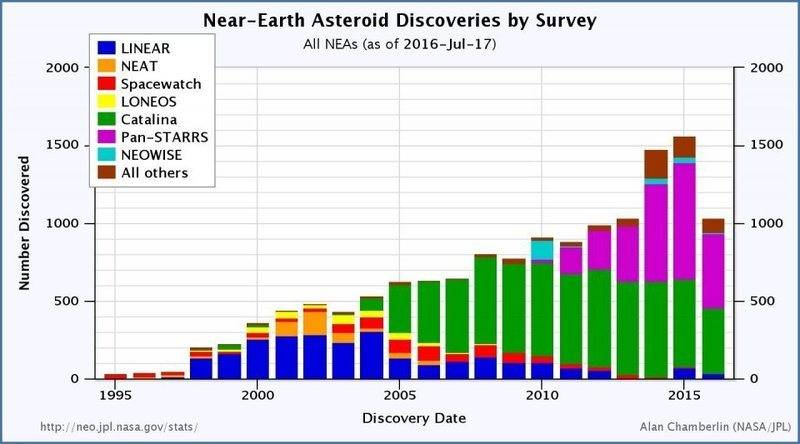 newjerseyrunner said:
Either way, both the US and Russia do have the capability to shoot a nuclear weapon at an asteroid.

I am not aware of a nuclear anti-impact facility being constructed or having been constructed. All of the nuclear weapons currently held are designed to strike targets on Earth (and some of those haven't been upgraded in decades). Since the nuclear weapon is often considered the magic bullet of object deflection, maybe they should set aside and maintain a specially designed group of them for striking the far more distant targets presented by asteroids.
Hurrying to assemble such a device at the last minute doesn't give me a whole lot of confidence. Time pressure and recklessness are not very compatible with nuclear innovation, just ask Harry Daghlian, Louis Slotin or the folks from the Chernobyl control room.
Progress in this area is being made, but it's got a ways to go.
Noisy Rhysling

newjerseyrunner said:
The nuclear deflection concept doesn't produce chunks, it produces vapor. The bomb itself doesn't actually push the asteroid much, but it vaporizes the surface on one side, which acts like a rocket.

If it works as predicted...
Log in or register to reply now!

We colonize an Earth-like planet with 2 million people...
2

How to defend against lasers?

Could a moon orbiting a water-giant planet look like earth?

Largest possible size for a goldilocks zone planet with near Earth Gravity?