because I am using log rule to prove something else and to prove it I need to have proof for derivation of polynomials! To make a longer story more short:)
Last edited by a moderator: May 5, 2017

Your terminology is a little vague. Are you looking for the derivative of xa, where a is real?

In that case you can use the generalization of the binomial theorem for non-integer exponents.
georg gill

The "generalized binomial theorem" mathman refers to is given on
http://en.wikipedia.org/wiki/Binomial_theorem
well down the page, under "generalizations", of course.
georg gill

Thanks! Is there not any proof for this rule? Think I saw that Newton did not give any proof? (a proof that does not use derivation rules for polynomials is what I would want in any case)

georg gill said:
Does anyone have a different way of explaining derivation of polynoms of all real numbers

because I am using log rule to prove something else and to prove it I need to have proof for derivation of polynomials! To make a longer story more short:)

Sorry my first post is very unclear (@mathman:) ) I think I will try to explain a bit better

because I am using rule of derivation of polynomials to prove log rule here:

d/dx of both sides.

dimensoin10, he said he wanted a proof that did not use the logarithm.

georg gill said:
because I am using log rule to prove something else and to prove it I need to have proof for derivation of polynomials! To make a longer story more short:)

It is easier to prove d/dx ln x this way.

HallsofIvy said:
dimensoin10, he said he wanted a proof that did not use the logarithm.

Oh, I did not see that.
epenguin
Homework Helper
Gold Member

I think many years later the thought returned in my head and in my head I thought oh well it would be easy for rational numbers as well which maybe I also did in my head. To make sure I just did it .

Firstly you can easily do it for negative integral n by the derivative of a quotient rule.

Now it is true for all rational numbers and we can approximate any real number with a rational one as closely as we please. I am satisfied enough that it is true of all real numbers but I am sure anyone not satisfied could further elaborate this easily.
georg gill

I don't get what you do when you differentiate

What rules do you use?
epenguin
Homework Helper
Gold Member

georg gill said:
I don't get what you do when you differentiate

What rules do you use?

The ordinary algebraic rules for indices, the rule for differentiation of function of a function and apart from that I see there is a flaw in the argument I will see if I can repair.

The flaw is in the third step where I assume the derivative of x1/b for integral b is bx1/b -1. But this is only a special case of what I am trying to prove. I am trying to prove the formula true for rational n from the fact that the formula is true for integral n - but 1/b of course is not integral, though b is, so this step has not been justified. I think the following proof for it is OK.

the first part of the above formula being authorised by it being already established for integral b.

which is what I used in the third step the above argument.

I suspect there could be shorter proofs and certainly other ones of the whole thing.

And for real n I guess you could show the derivative for xn, n irrational, is between those for p<n and q>n and squeeze it between rationals that can get as close to n as you please.
Last edited: Nov 24, 2011
georg gill

here you use the fact that:

I have the issue (a)

I tkink it is proved by dedekinds cut. Does anyone have a proof like that for (a) that they can get online? Or they know about a book that has the proof?
Last edited: Nov 25, 2011
HallsofIvy
Science Advisor
Homework Helper

dimension 10, in post 9, used the fact that ln(x) is the inverse function of [itex]e^x[/itex] to get the derivative of ln(x).

Georg Gill, I see nothing labeled "a" or "issue a" in your post. To what are you referring?
georg gill

georg gill said:
here you use the fact that:

I had a typo in my last thread. Sorry i have corrected (a) above. This is what i wanted (a) to be:

And (a)is what I want to prove. I have proved the derivative of lnx if I prove (a) that is the only relation I can't find proof for I think.
HallsofIvy
Science Advisor
Homework Helper

but is there a proof with dedekinds cut that are working? What are the limitations of the proof?

you say this is the proof

what limetations does it have? And what conequences?
Last edited by a moderator: May 5, 2017
epenguin
Homework Helper
Gold Member

georg gill said:
here you use the fact that:

I have the issue (a)

I tkink it is proved by dedekinds cut. Does anyone have a proof like that for (a) that they can get online? Or they know about a book that has the proof?

Oh dear, it sound like your interests and needs fall into abstract algebra where they formulate and justify every little step like that or a bit mathematical philosophy. I am not the best person to ask.
This is at the same time elementary school algebra which abstract algebraists probably consider too informal and indeed maybe they do not justify these things rigorously at school there yet somehow we all use them and think we know what they mean.

In second year at secondary school we were told that c X c was termed c2 and c multiplied by itself n times was termed cn. That was just a definition of an index in arithmetic. But from that rules like cn X cm = cm+n follow I think it is easy to see. As is also the rule

(And by the way those led to logarithms - I don't know how much this aspect there is now at school but for more than 4 centuries they had this important application of mapping the harder operation of multiplying numbers onto the easier one of adding them.)

OK you tell me, that works when raising to integer powers, what about fractional powers 1/n? Your question was about dividing nor multiplying indices. 1/m didn't fall into my definition in fact of an index, I can multiply something by itself 3 times but not 1/3 of a time.

If, having given a consistent arithmetic interpretation to indices that uses the three airthmetic operations we also want to us the fourth then we have to interpret raising to the power 1/m as taking the m-th root.

That is to say, c1/m is that number which when multiplied by itself m times gives c, what we mean by m-th root.

I have only needed integers all through and it could be extended to a consistent system of reals by some such argument as I sketched before about reals.

I take it that was your question. For check and any other questions we need the mathematicians.

(In this connection a teacher asked me not long ago, she had been teaching indices to kids and one had asked her what is 00 ? She didn't know whether it was 0, 1 or something else. I had to work that out and decided it was 1 as I'd suspected. She asked me it's a convention. I said not entirely a convention, it's what you need if you start with my starting index convention and want an entirely consistent arithmetical scheme with it. But I don't know whether this ever got through to the kids.)
georg gill

maybe this is a start for proving that

for rational numbers for x and y not real numbers

and we also know that

Since I have showed that

I only need to show that

(subscript is only for showing that it is m as)

in other words I need to show

to show (IV) for any whole positive integer of n and m and any real number of a
Last edited: Nov 26, 2011
georg gill

This should also show that

then could one say?

I had written out some comments but then lost them because of how the site has been loused up.:grumpy: Hope the extract below of some help.

In brief you need someone here to point you to suitable readings in real analysis (not abstract algebra). Having questioned, thought and played about with should ease you into it.

To my surprise that formula you didn't like is exactly what they do use to put raising to an irrational index on a logical footing and making sure it means something. 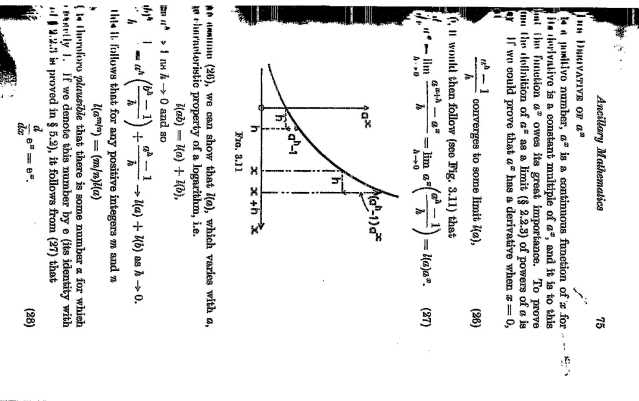 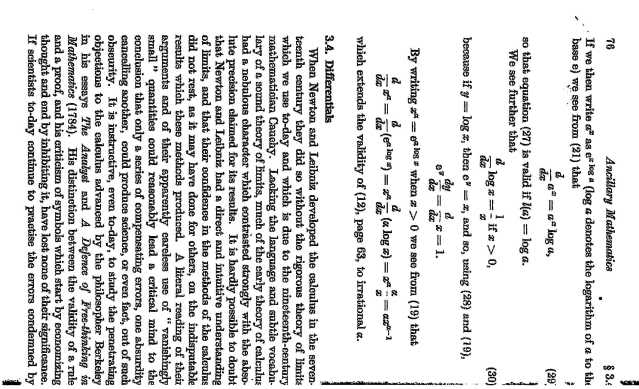 Suggested for: Derivation of polynoms

B Derivation of exact differential