I'm reading McCabe and Thiele's classic "Unit Operations of Chemical Engineering" section about the design of sieve-plate columns. Below is a figure showing a column. I have a few questions and some clarification would be great. 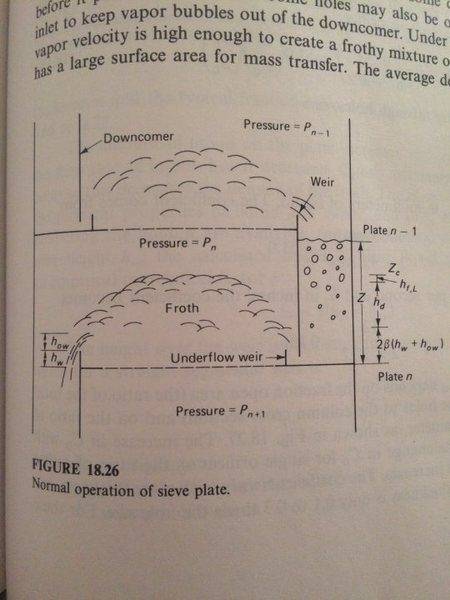 1. Isn't the weir for plate n-1 simply the downcomer for plane n? What is the distinction between a weir and a downcomer?

3. Even without weeping, wouldn't at least some liquid go through those holes?

6. In the operation limits for sieve trays section, it states

At low vapor velocities, the pressure drop is not great enough to prevent liquid from flowing down through some of the holes. This condition is called weeping and is more likely to occur if there is a slight gradient in the liquid head across the plate.

What is liquid head? I have always had a very muddied understanding of the term "head" used in hydraulics. There are velocity heads, pressure heads, liquid heads, every type of head conceivable and it confuses me.

A few minutes searching on line would have given you all the information you need .

Here are a few useful sites :

There are many more .

It is up to you now to do a more comprehensive search . Please come back if you have specific questions .
gfd43tg
Gold Member

Thanks for the sources, I particularly like the separation processes website. However, I am still confused about what the pressure drop due to liquid hold up means. I don't have a good idea in my head what the heck that means. Is liquid hold-up and liquid head the same thing?
insightful

Only if defined to be. Liquid hold-up could also be defined as "the total liquid held on a tray" (my experience). In this case, it would include all the liquid on a tray including in the downcomer and have units of volume.
Log in or register to reply now!

What is Damping in a distillation column