I have heard that in neutron stars, the atoms do not repel nor do they attract. In a sense, could this mean that these atoms nucleuses could touch each other, or could the atoms touch in general?

Neutron stars are not composed of atoms. The outer crust is most likely composed of a "sea" of nuclei or ions and unbound electrons. Deeper in you start to see a few free neutrons and the ions become completely ionized, losing all of their electrons and becoming bare nuclei. As you go deeper you start to see more free neutrons and eventually the nuclei themselves get decompose into individual nucleons (protons and neutrons), and the whole thing turns into a soup of free protons, neutrons, and electrons. The core may be composed of this soup of free particles, or it may exist as a quark-gluon plasma, in which the nucleons themselves get decomposed into their constituent particles: quarks and gluons.

See the following picture taken from the wiki article on neutron stars. 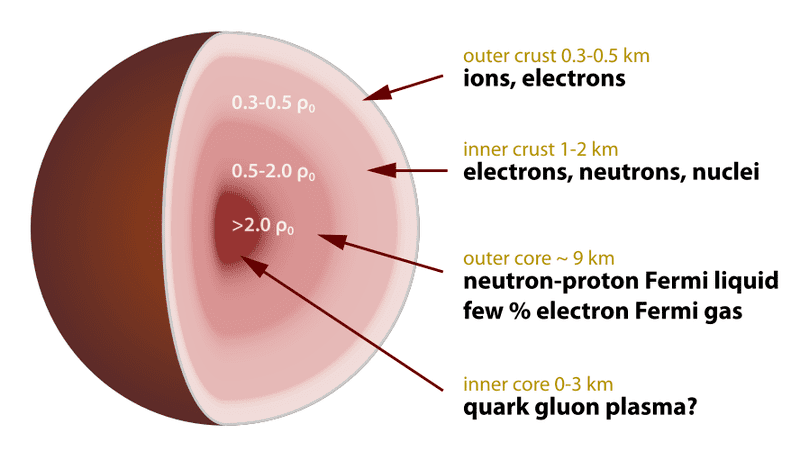 Jake52902 said:
I have heard that in neutron stars, the atoms do not repel nor do they attract. In a sense, could this mean that these atoms nucleuses could touch each other, or could the atoms touch in general?

You already have an expert reply from Drakkith, but since you used the "B" tag, perhaps you'll also benefit from reading Paul Sutter's articles. I notice the word 'soup' is common in both accounts

Oh, and: in this context it is hard to interpret the term 'touch', so your question is difficult to answer in general.
Chronos
Science Advisor
Gold Member

The gravitational field of a neutron star is so great electrons are unbound from atomic nuclei, thus no atoms can exist in a neutron star. The force is so great in the interior of a neutron star that even atomic nuclei are deconstructed and all that remains is a sea of neutrons, protons and electrons. At the core of a neutron star the force is sufficient to decompose neutrons and protons, resulting in quark matter. This is, of course, largely conjecture because we cannot reproduce pressures necessary to mimic neuton star core conditions in the laboratory. The density of matter in the outer crust of a neutron star is about the same as the density of an atomic nuclei, so for all practical purposes we can say the nuclei are packed together like wet sand - in other words they are virtually touching one another. The density can easily exceed atomic nuclei density as you approach the core. We know such energies are capable of decomposing neutrons and protons because this what a collider does, albeit on a very modest scale.
Vanadium 50
Staff Emeritus
Science Advisor
Education Advisor
2021 Award

Jake52902 said:
could the atoms touch in general

Before going on to this, let's start with a simpler question: do the atoms in a solid touch?
Share:
Share

I
Strange stars and neutron stars

E
B Grav-stars vs. Neutron Stars?