Does this ANN make Benjamins?

I'm attempting to use a artificial neural network to store a fuzzy floating point variable. While writing the code, I became somewhat creative. I used the idea of an Set Reset Latch and statistically translated the hardware SR-latch into an artificial neural network. My mathematical goal is to determine if input is consecutively low or high. To achieve this, I've modified the neural network idea slightly. Since I did not have a way to calculate error (also a reason for thinking this up), I pointed the error vector down in terms of the difference of the second derivative and first derivative of the end layer's nodes, so that the network would converge on less and less change of nodes. Also I've modified this activation function:

to allow for three convergence areas: -1, 0, 1, as seen in the following output of kmPlot: 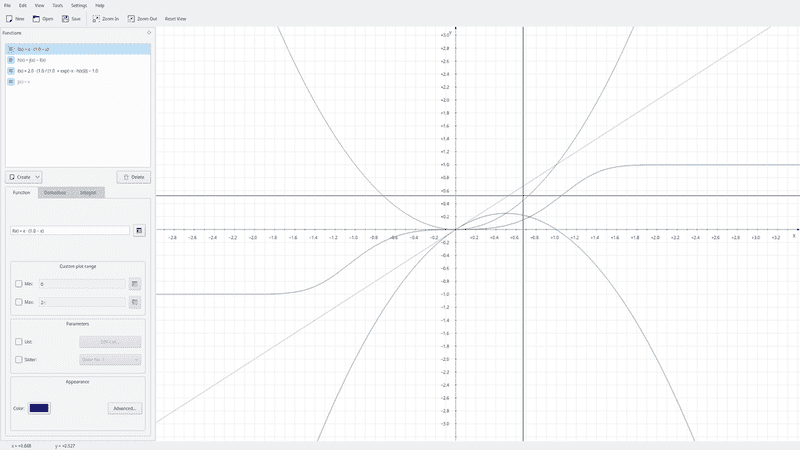 Okay. It is a little hard to read. But. What is your question, I do not seem to see one?
Could you please post a graphic image which would help us older citizens read your output?
ADDA

I guess, I was wondering if my idea is valid mathematically. Or is it just creative?

I'm unsure how to post media... other than how I have already. Would you like the equation and explanation, jim mcnamara?
ADDA

I've made the following video to show output of my ANN:

The dot pairs represent notes on a guitar: open to the left, low E on the bottom. I start with an open D. The colors represent convergence areas: red (-1), green (0), blue (1). The top dot is one SRANN's output, corresponding to the input of a octave overtone; the bottom dot, an octave fifth overtone. There is an input multiplier in the lower right corner. Magnitude is represented by the alpha channel. A convergence of 0 (green) discards a bright note as being an overtone. The goal is to distinguish between, let's say D3 and D4, or E3 and E4, as played halfway through the video.
stoomart

That depends on if you are selling a solution to a problem someone is willing to pay for. There’s a rule-of-thumb that says if you aren't profitable after doing something for a year, it’s just a hobby.
ADDA

stoomart said:
That depends on if you are selling a solution to a problem someone is willing to pay for. There’s a rule-of-thumb that says if you aren't profitable after doing something for a year, it’s just a hobby.

Literally, I was being cute. My original title was "Does this ANN make sense." Then pun'd on cents to bills to benjamins.
jim mcnamara
Mentor

FWIW - Since I thought you we trying to make a joke I let it slide. Rather than locking the thread that was basically nonsense. When you expect an answer ask a clear question. You will notice your funny question got no useful answers. This thread is going nowhere. Closed. Please consider asking a clear question.
Thanks.
Log in or register to reply now!

Related Threads on Does this ANN make Benjamins?

How does a virtual private network work (basics)

Difference between Flip-flop and latch