Hello to everyone!
First I would like to go through one simple example:

We have two bodies. One is wave source, other is wave receiver.
In this example they are positioned like this:

Distance between them is always 1000 m. Lets say that the waves are sound waves with the speed 340 m/s, and frequency 2500 Hz, both bodies have same acceleration, for example 10 m/s2, they move in same direction with same speed in any moment. They started with no motion at first moment. Their motion started same time as first waves were released from source...

So i calculated what happens as time passes, with frequency received by receiver…

So please check this and say if you agree or not… 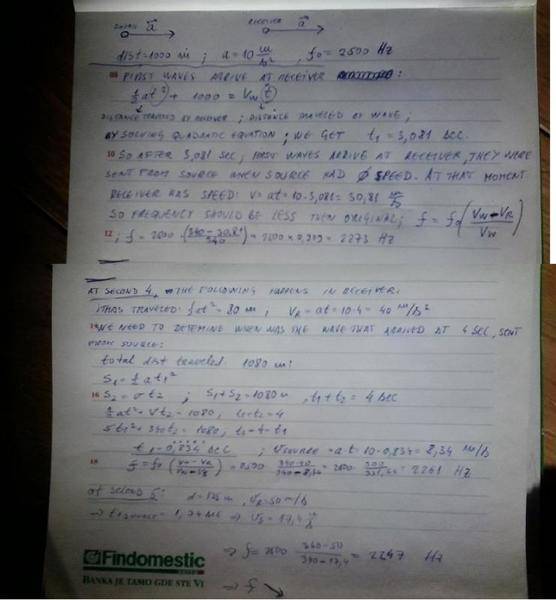 Then I made excel sheet that shows what happens as they continue...

So what I wanted to point out is, distance between source and receiver never changes ,but the frequency picked up by receiver keeps changing, compared to original frequency. In this case it decreases as time passes.

Does this make sense to you, and if it does not, what could be mistakes in logic?

Anyway, I chose this example because this could be easily checked with simple experiment, with two falling bodies where one is hanging from another. Only in that case, change in sound speed in different altitude and air temperature and pressure should be considered.

Another example would be with two pendulums on long roaps that oscillate in phase. In that case sound frequency in receiver would oscilate..

So if we apply this principle (1) on light, we could say:

This could actualy mean that universe is slowing down its expansion instead of accelerating.
Last edited: Jan 13, 2015

Yes, the relativistic Doppler shift takes into account both longitudinal and transverse velocity. But the local motions of galaxies only account for approximately [itex]\Delta z \approx 0.003[/itex] for fast-moving galaxies. The nearest measurements that result in accelerated expansion typically range from [itex]z \approx 0.3[/itex] to [itex]z \approx 1.5[/itex] (very roughly). The furthest measurement, the CMB, is at [itex]z \approx 1090[/itex].

So for measuring the accelerated expansion, we can completely ignore local motions. The effects are just too small to change the overall picture.
Share:
Share

Does Hubble's law rely on the Doppler shift?

I How to measure a 21 cm EM wave if it is Doppler shifted?