Downwash reducing angle of attack of a wing?

There is theory in aerodynamics for 3D wing (finite span) that say :
quoted Douglas Mclean book: "wing is flying through air that is already moving generally downward between wingtips.Thus the wing can be thought of as flying downdraft, or downwash, of its own making. 3D downwash can thus be seen as downward shift in apparent angle of attack of each airfoil section along wing,often called induced angle of attack ".

In short downwash reduce AoA of wing, so wing feels "effective airflow"( airflow that has lower angle between chord line and freestream).
Theory refer to regular wing, not rotating wing (helicopter) or wing that fly behind other wing(example tail wing behind main wing). 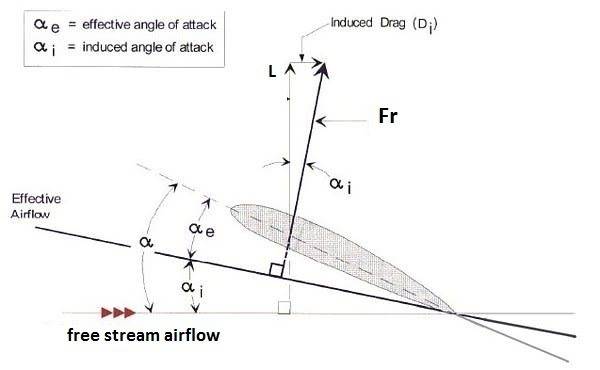 Some members from stack echange claim, that this is just mathematical concept(do you agree with them?) this is not really happend in reality(physically impossible), because downwash is happend behind wing, so it can not affect its own angle of attack and change direction of airflow.
(They claim downwash can change effective airflow only at roatating wing, or if wing fly behind other wing.)
https://aviation.stackexchange.com/...-airflow-or-it-is-just-theory-to-fits-numbers

consider a horizontal wing - it would be flying into the free airsteam horizontally - you agree.

I don't think the downwash from behind the wing is the thing the theory is taking about at all, so the stack exchange boys are mixing up conceptually.
Lnewqban
Gold Member

There is also an upwash forming ahead of the wing that must be considered when estimating that effective AoA.

It can also being explained as the gradual loss of lift equivalent to a gradual reduction in angle of attack towards the wing tip.

As you can see in this video, for the same velocity of the free airstream, the lateral component of the velocity formed due to the pressure by-pass around the tip of the wing, must be substracted from that velocity (unique for the whole wingspan).

The longer the wing respect to its chord (which is the constant in the generation of pressure differential), the less lifting area suffers from that lateral leak or movement of air towards the wing tip, resulting in reduced perpendicular velocity and lift.

As the same geometry is forced to go through the mass of air, while less total lift is generated, the lift-to-drag is reduced.

A good experiment would be to determine the difference in angles of incidence that the same airfoil adopts along the wingspan for zero lift conditions.

"Some authors do not use an arbitrary chord line but use the zero lift axis where, by definition, zero angle of attack corresponds to zero coefficient of lift."
Last edited: Nov 24, 2022
Jurgen M

256bits said:
consider a horizontal wing - it would be flying into the free airsteam horizontally - you agree.

I don't think the downwash from behind the wing is the thing the theory is taking about at all, so the stack exchange boys are mixing up conceptually.

"A linerized version of incrompressible inviscid sometime is useful for illustrating trend and providing insight into behavior of 3D wing,though is suffers a significant loss in physical fidelity."
Share:
Share

Suggested for: Downwash reducing angle of attack of a wing?

Find the wingspan and sweep angle of a V-tail

What are the drawbacks to "annular wing"/"super circle" aircraft?

What are these loops on this jet's wing?

Does a wing really "feel" the effective airflow or it is just theory to fits numbers with experimental results?

The choice of sweep angle (low speed) and its impact on C_L, C_D, C_M