I thought all chalk was more or less the same so most people would only use the cheapest stuff. Turns out I'm wrong:


"There have been rumors about a dream chalk, a chalk so powerful that mathematics practically writes itself," writes Professor Satyan Devadoss, on the website of the math and statistics department at Williams College, "a chalk so amazing that no incorrect proof can be written using this chalk. I can finally say, after months of pursuit, that such a chalk indeed exists. It is called the Hagoromo Fulltouch Chalk."

"For those lucky few who have used it, it can truly be called the Michael Jordan of chalk, the Rolls Royce of chalk," he writes, tipping over into italics in his excitement. "It is made in Japan, and is a bit larger than the classical American chalk. Moreover, it comes with a wonderful coating which protects the user from chalky hands. Once you’ve used it, there is no going back."

Unfortunately, it's pricey and you have to have it shipped from Japan. But does a virtuoso quibble about the price of a Stradivarius? And there's even something sensual about that name, "Fulltouch." 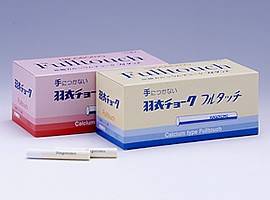 K
White versus Chalk Board

To dream the impossible dream

R
What kind of board chalk is this?