Since Im taking dynamics right now, I thought I would write a short thread on coordinate motion that goes into more depth than most second year dynamics courses which tend to gloss things over.

The only thing you need you follow along is basic dynamics, calculus III, and minor familiarity with matrix theory (Most of it is just stuff from the first few weeks).

Note: I might be a little bit slow in posting, but I'll try to do it as fast as I can. (And Im trying to relearn latex.

Hopefully if your taking dynamics this will expose to a little more depth of the subject and make coordinate motion more clear and rigorous.
Last edited: Feb 1, 2007

Above is a graphical representation of the dot product.


The dot product is a scalar product of two vectors and is denoted as:

Important Points From this Review 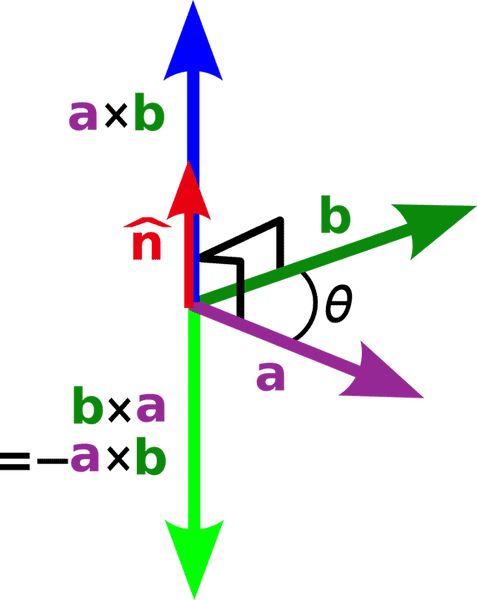 Above is a graphical representation of the cross product.

The cross product is a vector product of two vectors defined as:

Important points from this review:

Earlier, I used the notation [tex] ||_2 [/tex] when I wrote the dot and cross product. This notation denotes the Euclidean Norm of a vector, but what most books would call the magnitude. This is just another notation, but I included with the hopes of learning something new.

The Euclidean Norm (or magnitude), is given by:

To be more general, if x is an n-dimensional vector:

Then the p-norm of x is given by:

When p=2, we get the Eulidean Norm (Magnitude).

Important Points From this Review

side
Write out the Norm using p=2, you will find that you get the equation of magnitude you are accustomed to!
Last edited: Feb 2, 2007
Cyrus

There are 4 primary coordinate systems that are used in dynamics:


An important fact about any coordinate system is that all three base vectors, are orthonomral to eachother: they are orthogonal (mutually perpendicular), and have a Euclidean Norm (Magnitude) of 1. Each of the unit vectors lies in a principal direction. The three vectors together form a mutually orthogonal triad. (for now, think of the three base vectors as being in the x,y,z direction-a cartesian coordinate system).

Typically, the unit vector is denoted with a lower case e and a subscript indicating the name of the direction. *For example, [tex]\vec{e}_x[/tex] is a unit vector in the x-direction.

A formal way of writing this is to say:

[tex]\varepsilon_{ijk} =0[/tex] if any two indices are repeated.

side
*The unit vector in the x-direction is not given the notation [tex]\vec{e}_x[/tex], but for now its just to drive the point across of what the notation means.
Last edited by a moderator: Apr 22, 2017
Cyrus

Cartesian, or Rectilinear Coordinates, is the one most people are accustomed, shown here schematically.

This coordinate system is fixed and is inertial, meaning the coordinate system does not accelerate. It remains stationary or moves with constant velocity. For this reason, the unit vectors that describe the orthonomal directions are linearly time invariant (LTI) - they dont change with time.

The position of a particle P, can be described by a position vector from the origin of the coordinate system to the particle. We denote this vector as:

where x,y,z are functions of time

Recalling the definition of the Euclidean Norm earlier, the distance from r to the origin O becomes:

During a small incremental time step, [tex]t+ \Delta t[/tex], the position changes by an amount [tex]\vec{r}(t+ \Delta t) [/tex], as seen http://images.google.com/url?q=http://omega.albany.edu:8008/mat214dir/kinematics-dir/vecfunc.gif&usg=__tzZk6zD4SPQxlJqXfxqEseFW8SQ= [Broken]. From this, the velocity of the particle is given as:

Using the chain rule, this gives:

Notice above that the derivatives of the unit vectors vanish because they are time invariant - this is a consequence of being a fixed frame of reference.

The acceleration can be found in a simliar fashion:

side
The formal forumla for the velocity and acceleration vectors were given; however, no mention was made to their directions. I will explain their directions in the next section on curvilinear coordinates.
Last edited by a moderator: May 2, 2017
Cyrus

At this point, it is better to talk about the directions of the velocity and acceleration vectors before moving on to curvilinear motion.

___Velocity____________
Here is a good graphic that describes the direction of the velocity vector.

Now, lets decrease the time step, one step at a time, until we come infinitely close to [tex]\vec{r_t}[/tex]. This is the result. When this occurs, the vectors [tex]\vec{r_i}[/tex] and [tex]\vec{r_f}[/tex] become almost indistinguishable. (Notice in this picture that as [tex]\Delta t[/tex] decreases [6-times total] the vector [tex]\vec{r_f}[/tex] moves to the left and becomes darker in color.)

Additionally, the vector [tex]\Delta \vec{r} [/tex] becomes tangent to the red curve. The red curve is the path that the particle follows; therefore, the velocity vector lies tangent to the objects direction of motion. This is simply a graphical representation of what it means to take the limit of:

To 'see' what's going on with the acceleration vector, we create whats called a hodograph. A hodograph describes the locus of points for the velocity vector centered about a common origin.

At each instant in time, the particle will have a velocity vector that is tangent to the path. This is shown by the top curve, or "trajectory" in http://eom.springer.de/common_img/h047500a.gif [Broken] diagram.

If we were to take each of these velocity vectors along the trajectory and give them a common origin, O, we would get a graph similar to the one on the bottom of the figure. There would be a path traced out through the collection of the tip of each velocity vector.

Although the average velocity and acceleration are not as accurate as the instantaneous velocity and acceleration, dont underestimate its imporantance. In real world systems, the velocity and acceleration are measured by analog devices and converted into a digitial signal which is sent to the computer. An analog device outputs a continuous signal; however, mircoprocessors work in binary (1's and 0's). Therefore, the analog signal must first be converted into a digital signal the processor can use. This is done by an analog-to-digital converter (A/D). During this process, the continuous analog signal becomes discritized (or quantized) to finite time step on the x-axis and a finite amplitude zone on the y-axis. How small the time step is depends on the quality of the sampling rate of the A/D. The result is that the computer has to calculate the average velocity and acceleration of real world systems and use it as an approximation of the instantaneous velocity or acceleration.

Here is an example of how an analog signal (the gray curve) becomes converted into a digital signal (the red curve). The dashed lines represent the discretization of time on the x-axis, and the voltage on the y-axis. During any time interval [tex]\Delta t[/tex], the red curve approximates the gray curve as being constant over said time span.
Last edited by a moderator: May 2, 2017
lightarrow

It's a pity I didn't have all these nice tips at my first year uni.
Crazy Tosser

Cyrus, maybe you should move the Tutorial with the other tutorials?
mhkhattab

does such a thread concern what i'm asking about or is it just that u want me to see what ur doing , ur not helping man , just say u don't have a clue about the case i asked u about and i'll be fine with it , thanks anyway
Share:
Share