I'm not sure if this qualifies as a 'homework question'. There is no specific problem...I have a question about something in the text.

Then it says that the E field between the plates is equal to 2 *sigma 1/ epsilon or twice what it was before the second plate was brought over.

Consider a single conducting infinite sheet with surface charge density ##\sigma_1## on each face and total charge density ##2\sigma_1##. The electric field it generates is obtained from Gauss's law. The electric flux through the usual "pillbox" is ##\Phi_E=2EA## and the enclosed charge is ##q_{enc}=2\sigma_1A##. Application of Gauss's law gives the magnitude of the electric field, ##E=\sigma_1/\epsilon_0##. The direction of the field is perpendicular to the sheet and away from it on either side. (we assume that ##\sigma_1>0.##) We can view this as the superposition field produced by two sheets, each generating field ##E=\dfrac{\sigma_1}{2\epsilon_0}.##

So to model this, we charge two sheets, bring them close to each other and let the surface charges go wherever they want. We will consider four surfaces each producing its own field. Using subscripts 1 and 2 to identify the sheets and L and R for "left" and "right", we have $$\sigma_{1L}+\sigma_{1R}=2\sigma_1~~~~~(1);~~\sigma_{2L}+\sigma_{2R}=2\sigma_2~~~~~(2)$$Now look at the drawing below. We know that inside conductor 1 at point A the electric field must be zero. By superposition, it is also the sum of four contributions from the four distributions, one to the right from ##\sigma_{1L}## and the other three to the left. 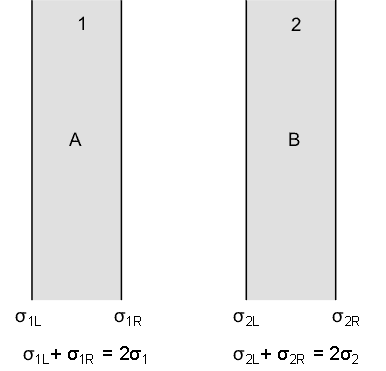 Suggested for: E between parallel plates

Flow between parallel plates or not.

Field between Parallel Plates in a Capacitor