So I THINK I understand that the tidal bulge is resting slightly in front of the moon because of the Earths rotation and the moons gravity, it pulls the moon 'forward' a little adding energy to the moons orbit and expanding it, what I do not understand is why the Earths rotation is slowing. I think I understand that it the energy of the tides (And also tidal electricity generation) has to come from somewhere. Could somebody please explain to me why mechanically the earths orbit slows down? Also do these tidal interactions occur with the atmosphere and mantle? Can these tidal interactions occur between hypothetical 100% solid bodies, if so to what extent? Also if my original assumptions are wrong please let me know, as I know you will. Thank you for your time. :)

Last I heard, the Earth's rotation was speeding up. This was due to dams holding large bodies of water at high latitudes, thus bringing more of the Earth's mass towards the center.
Chronos
Science Advisor
Gold Member

The moon has a braking effect on earth's rotation due to tidal friction. This also causes the moon to slowly recede from the earth. It will eventually become tidally locked with earth, but, probably not before the sun incinerates it.
davenn
Science Advisor
Gold Member
2021 Award

Algr said:
Last I heard, the Earth's rotation was speeding up. This was due to dams holding large bodies of water at high latitudes, thus bringing more of the Earth's mass towards the center.

dunno where you heard that, but it is incorrect

if what you said was true, we would be taking away leap seconds, not adding them periodically

Hoophy said:
Could somebody please explain to me why mechanically the earths orbit slows down?

The Moon's gravity pulls on the bulges, and the bulges pull on the rest of the Earth. So as the Moon is pulled forward by the leading bulge, the Earth is pulled in the opposite direction, which slows its rotation down.


Hoophy said:
Also do these tidal interactions occur with the atmosphere and mantle?

I'm sure the atmosphere is pulled just like the tides are, it's just that any effect would be much smaller than the tides. As for the mantle, I don't know.


Hoophy said:
Can these tidal interactions occur between hypothetical 100% solid bodies, if so to what extent?

If you mean 100% rigid bodies, then I don't believe so.
mfb
Mentor
Insights Author

There are also tides in the solid part of Earth. The LHC at CERN has to adjust their magnets frequently because the ring geometry changes due to those tides. On a global scale, the Earth is not that solid.
LHC and tides
Bandersnatch
Science Advisor

Here's a pic from a random website showing the interaction Drakkith described: 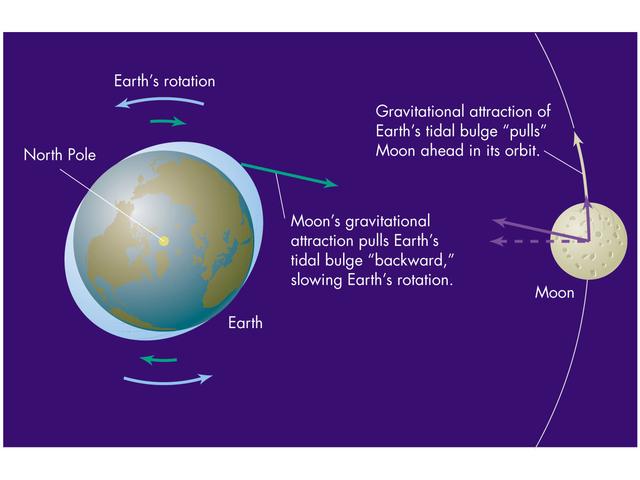 Regarding effects of rigidity on tidal deformations, you might want to look at 'Love numbers'. Googling for the phrase is slightly problematic, for obvious reasons - just make sure you add the keyword 'tides' to your search query.
In short, you don't get tidal braking from a 100% rigid solid, as the tidal potential can't produce a tidal bulge. Since such a thing doesn't exists in reality, you end up with varying degrees of tidal interactions depending on composition - the atmosphere responds differently than the oceans, which differ from the crust, which differ from deeper, denser regions of the planet.
Share:
Share

Is it true that the earth's rotation is slowing down?

How is the earth slowing down

R
Is Venus Slowing Down?

If earths rotation stoped, the moon would be released.
3