Pengwuino said:
INSPIRATION! Every car should have a giant retractable hook that we could hook on a huge citywide electrical grid like street cars!

I don't remember where, maybe just a sci fi movie, bur I saw mention of cars that pick up their energy from the road as they drive on it.
Ivan Seeking
Staff Emeritus
Science Advisor
Gold Member

TheStatutoryApe said:
I don't remember where, maybe just a sci fi movie, bur I saw mention of cars that pick up their energy from the road as they drive on it.

Ivan Seeking said:
In case you all missed the bad news about plug-in hybrids: You also have to add about $20K to the purchase price for the really long extension cord.

Plug-ins won't be very useful until all the companies trying to design them decide to play nicely with each other and come up with a common plug style so it's economical for place to install plug-in stations in parking lots (I could easily see it being the next generation of parking meters...plug your car in, swipe a credit card, and pay for what you use of the electric).

Right now, though, I think these cars have more limitations than value. It's just another high-priced status symbol. I guess it's better than people using gas-guzzling SUVs as status symbols, but they still aren't really practical or cost-effective. The other issue I still have is acceleration on these vehicles too. One of my coworkers has a Prius, and we had to travel out of town so took that. On the way back, she was tired and let me drive it. It has NO acceleration. I was afraid we were going to get squashed trying to merge into highway traffic because I had the pedal to the floor and it was still just slowly puttering up to speed. I want to be at highway speeds by the time I hit the end of the on ramp so I can smoothly slip in with the flow of traffic. I can also see that bad acceleration contributing to clogging up traffic even more as people have to slow for something and then take longer to get back to speed again.

They also need to work on the design of the interior compartment of the car. The steering wheel was way too tiny...it wasn't comfortable at all to drive. Too much of the useful dashboard space was taken up with the electronic gadget that shows you your fuel mileage on a chart continuously updating...but only in 25 mpg increments, which is so imprecise as to lack any value...when people tell you they get 50 mpg in those cars, it's probably that they get something over 25 mpg and that's what the dashboard computer tells them they get. The speedometer was up high and forward and not in a convenient place to look for it. I had a tough time knowing what speed I was going having to find the speedometer every time (unlike with a purely gasoline engine car, nothing about the feel of the engine or car gave any sensation that helped gauge speed...it felt the same going 20 mph as 60 mph, so you HAVE to spend more time looking at the speedometer to know your speed, which seems like a safety flaw). I asked my coworker how it handles in the snow we get, and her response was, "We drive the Subaru in snow." Note that you HAVE to put snow tires on it to even hope to stay on the road in winter, not all-weather tires. I wasn't sure I'd stay on the road in slightly breezy conditions; the car is so light, it definitely drifts with wind. I guess on the plus side, like the original VW bug, if you get stuck with it, it's easy enough to push it (assuming you can put it in neutral if the engine quits...it had a weird shift lever).

On the hopeful side, if people buy them as a novelty or status symbol or because they're gullible enough to think there's a benefit to the purchase, at least the revenue from those early sales should help fund more developments to improve them to something more useful.

The cost of the batteries is going to be a big issue as the cars age too, making them less valuable on the resale market. It's not particularly "green" to start having a lot of 10 year old cars piling up in junk yards if it's cheaper to buy a new car than buy a used car that needs to have expensive batteries replaced.
xxChrisxx

Pengwuino said:
INSPIRATION! Every car should have a giant retractable hook that we could hook on a huge citywide electrical grid like street cars!

And with 1.21 JIGAWATTS!!! what then?
mgb_phys
Science Advisor
Homework Helper 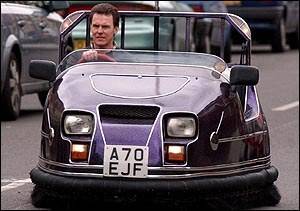 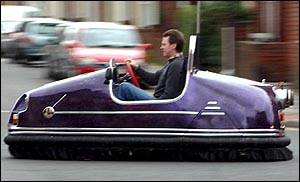 mgb_phys said:
Conventional taxis probably get only half the makers 'city' mileage because of the stop -tart congested driving.

Tart-congested driving? I bet that depends on the exact neighborhood they go to.

I have a Honda Civic Hybrid. There is no plugging in, the battery is charged from the heat of braking. It cost me $3000 more than a similar Civic without hybrid. I doubt that I will recoup the $3000 over the life of the car. As I bought it used, I did not get the govt rebate. I don't know whether the cradle to grave energy usage for the hybrid is more or less than the non-hybrid Civic. I get 43 mpg overall, and I drive mostly on highways. When I stop at a light, the engine turns off. This should be a big advantage for city driving, but I don't much of that. As I understand it, turning off a non-hybrid is a bad idea because it costs more energy to restart it than you save by turning it off.
mgb_phys
Science Advisor
Homework Helper

jimmysnyder said:
When I stop at a light, the engine turns off. This should be a big advantage for city driving,

VW claim that 25% of city driving in Europe is spent stopped and idling.

As I understand it, turning off a non-hybrid is a bad idea because it costs more energy to restart it than you save by turning it off.

It depends on the engine. A bigger problem is the start motor overheating they are only rated for turning the engine over a few times/day - not every few minutes for an hour.

VW had a system on the Golf (at least in Europe) that used a flywheel to restart the engine in traffic. For various reasons it is only practical on diesels.

The next Masda 3 is going to have a system that can restart a gasoline engine just using combustion. It stops the engine at a particular point in the stroke and then uses a pressurised fuel injector (like on a diesel) to restart the engine without any external power.
EnumaElish
Science Advisor
Homework Helper

Pengwuino said:
From what I read, it charges to 85% and allows drainage until 30%. Then the engine takes over.

Wouldn't that cause a "battery memory" problem (at the 30% mark)?
mgb_phys
Science Advisor
Homework Helper

EnumaElish said:
Wouldn't that cause a "battery memory" problem (at the 30% mark)?

Memory effect is only a problem for NiCd.

Li-polymor are very fussy about the last 10% of charge to full, I'm guessing the volt decided it was easier to play safe and only charge to 85% than risk shortening the battery life.

Discharging fully under load is also bad for Li-Poly but leaving 30% capacity seems a bit pessimistic. It may be that this is to ensure there is enough power available to cold-crank the ICE - assuming the Volt doesn't have a lead acid battery as well.
Moonbear
Staff Emeritus
Science Advisor
Gold Member

mgb_phys said:
The next Masda 3 is going to have a system that can restart a gasoline engine just using combustion. It stops the engine at a particular point in the stroke and then uses a pressurised fuel injector (like on a diesel) to restart the engine without any external power.

News Who Killed the Electric Car?
3

A
News The Pros of Driving An Electric Car

A few questions on car mechanisms and driving habits