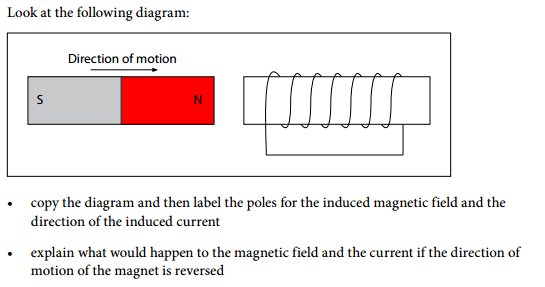 3. The Attempt at a Solution
so here are my answers, can some please verify if these are correct. Thanks in advance :)
a) i have no idea if im labelling the poles correctly, or if the induced current is in the right direction , any help would be appreciated!

Your currents and your polarities do not match.
alexandria


Is it the poles or the current direction that im getting wrong in both part a) and part b)??
can you be more specific?

Your intuition is right, but use the right hand rule and see if it matches the current directions you've chosen.
SammyS
Staff Emeritus
Science Advisor
Homework Helper
Gold Member


Is it the poles or the current direction that im getting wrong in both part a) and part b)??
can you be more specific?

I believe that is what axmis was saying. Your choice of direction for current produces a magnetic polarity opposite of what you show. (This assumes you are referring to conventional current rather than the direction of electron current.)
alexandria

ok so i used the right hand rule and this is what i got:
so for a) the current is supposed to be the opposite way around:

Correct. So, your poles are correct. You just needed to realize that only one direction of current would actually give you that pole configuration, and you utilize the right hand rule to figure out what direction that is.
alexandria

ok just to clarify, the final answer that i posted is correct!
and thanks for the help
Share:
Share