User @Nik_2213 posted a link to a web page that I think is entertaining to any kind of engineer. It's full of obscure machines from the past. Sort of beauty of old electric devices, but for mechanical devices.

http://www.douglas-self.com/index.htm At the lower right are power generation devices.

The home pate of this site is also fun, listing things like The Amplifier Institute, Unusual Locomotives,
http://www.douglas-self.com/index.htm

Some of you may have visited the Gold King Mine in Jerome, Arizona. This page looks like the cyber equivalent of that.

anorlunda said:
Sort of beauty of old electric devices, but for mechanical devices.

Wow. Amazing devices. I really like the pencil drawings; how meticulous they are.
anorlunda
Mentor
Insights Author


http://www.douglas-self.com/MUSEUM/POWER/mechrect/mechrect.htm said:
Before the invention of semiconductors, rectification at high currents involved serious losses.
There were various vacuum/gas devices, such as the mercury-arc rectifiers, thyratrons, ignitrons, and Vacuum diodes. Solid-state technology was in its infancy, represented by selenium and copper oxide rectifiers. All of these gave excessive forward voltage-drop at high currents.

One answer was mechanically opening and closing contacts, if you could do it fast and cleanly enough. The wonderful machine shown below was designed by Read and Gimson et al, at BTH Rugby in the early 1950s. It is a three-phase mechanical rectifier working at 220V and 15,000 Amps, and its application was the powering of huge banks of electrolysis cells.

For the train enthusiasts:

The BIG BOY, Union Pacific No.844, was at the railroad museum at the Pomona Fairgrounds, where the Los Angeles, California County Fair is held. My wife and I went to watch them move it in 2014. The museum is on the southwest side of the parking lot and there is a rail line
that passes the northwest corner of the lot. A distance of perhaps half a mile.

They had maybe 80ft to 100ft of track that they leapfrogged across the parking lot. I would estimate they did four leapfrogs a day.
There was a slight up hill slope so they chocked the engine wheels after each move. I don't recall the details, but they used a tractor
of some sort to, I believe push it, across the parking lot.

From there it went to the big rail maintenance yard in Colton, California for rebuilding sufficient to get it "Home" in Colorado. Things like the wheel bearings needed to be replaced and the drive cylinders rebored.

I thought we took some photos but can't find them now.
anorlunda
Mentor
Insights Author

Here's another fun one from that site, oddly powered clocks http://www.douglas-self.com/MUSEUM/POWER/oddclocks/oddclocks.htm

My dad was a clock collector. He had one clock that was wound by variations in barometric pressure. If it were not for wear, and the evaporation of volatiles in the lubricants, it could run indefinitely.

Actually, all those clocks should be lessons for young people who want to save the world via energy harvesting. The key to success in first to find an application that needs only tiny amounts of energy. An exquisite clock fits that description well, so there are lots of oddly powered clocks from history. That show us that the ancients were just as inventive as modern man in energy harvesting.


http://www.douglas-self.com/MUSEUM/POWER/oddclocks/oddclocks.htm said:
A temperature variation of only one degree in the range between 15 and 30 degrees Celsius, or a pressure variation of 3 mmHg, is said to be sufficient for two days' operation.

I'd like to see a video of it in action. Would be really cool.

edit: I should have searched YouTube. Here's one:
anorlunda
Mentor
Insights Author

LOL, I found the same video in parallel with you. I also found https://en.wikipedia.org/wiki/Rotary_converter
The wiki article has this cool figure. 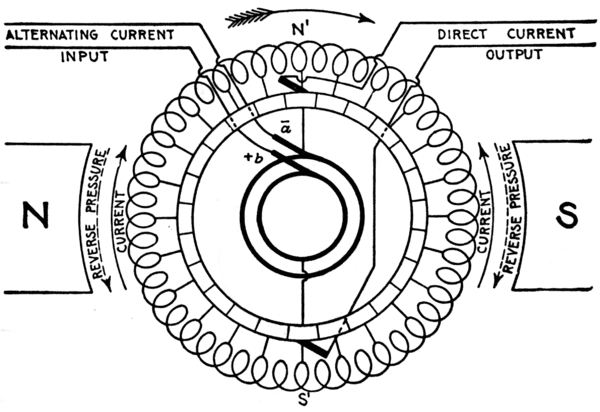 So, visually from the outside it looks like any motor or generator.

Tom.G said:
From there it went to the big rail maintenance yard in Colton, California for rebuilding sufficient to get it "Home" in Colorado. Things like the wheel bearings needed to be replaced and the drive cylinders rebored.

Big Boy 4014 is now at the Union Pacific steam museum on Cheyenne being restored .
i think 844 is a 4-8-4 high speed passenger locomotive, and a big one, that they use for nostalgia runs.
https://www.up.com/aboutup/special_trains/steam/locomotives/844.shtml
http://trn.trains.com/news/news-wire/2018/07/17-schedule-set-for-up-steam-trips-passenger-cars-delivered-to-cheyenne

One day some years back i was driving through Cheyenne, stuck in a traffic jam where I-80 goes over the railroad tracks.
i thought i heard a steam whistle then a 'chuff chuff chuff'...
So i looked to the left and saw a rail yard with a huge barn.
Next thing i knew here came out of the barn a steam locomotive with three passenger cars, right under the bridge and already up to probably 40mph.
As the coal smoke wafted up surrounding all us surprised motorists the train roared off into the distance headed West. The smoke was so thick i looked like you could walk on it - those engineers were having a ball .
I found out later that a couple times a year UP has nostalgia steam excursions.

old jim
You must log in or register to reply here.