A couple of weeks ago another poster (@ElliotSmith) posted a 3D model he did of a reactor control room in Blender. This inspired me to do a model of a different kind or "control room", the bridge of the starship Enterprise.

The model is not fully complete as many of the areas not shown in these renders haven't been finished, but here are some views of what I have finished so far. 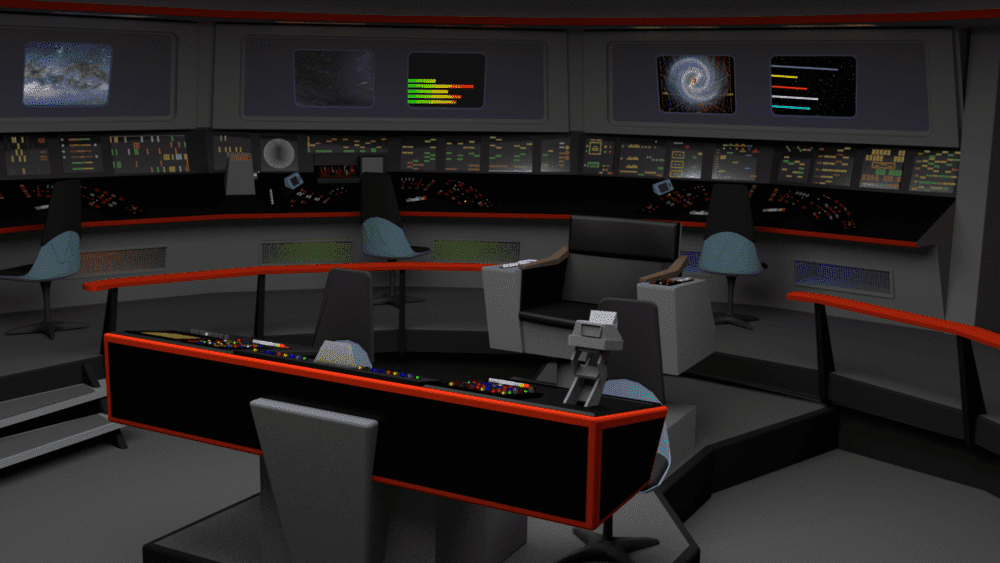 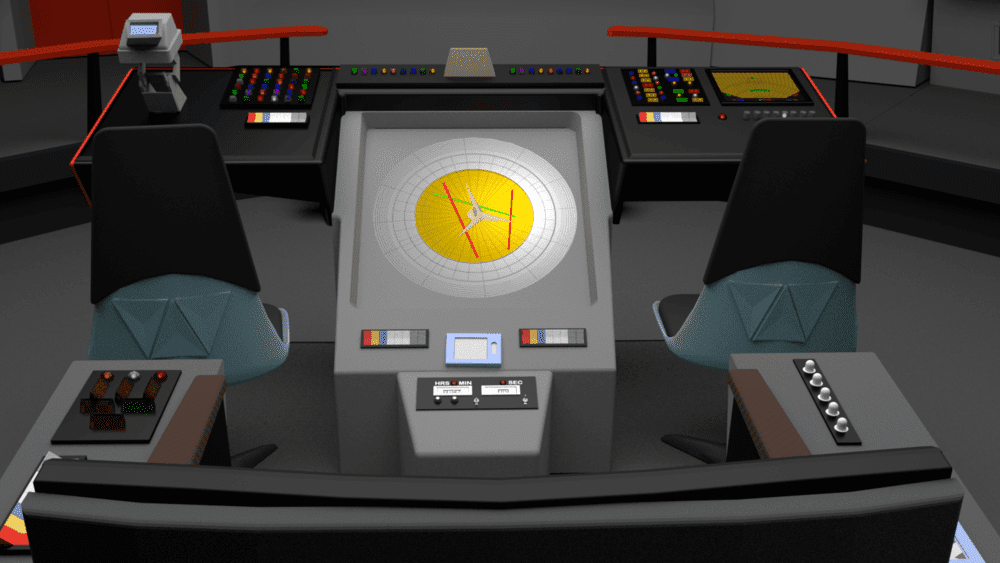 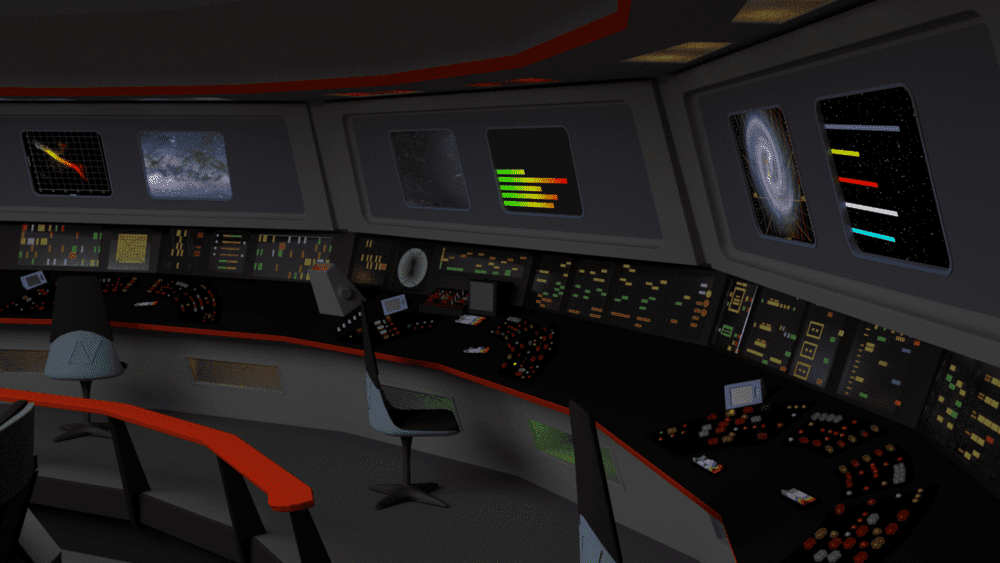 This is quite awesome. Did you know that there’s a Star Trek Original Series museum in Ticonderoga NY. They have built exact replicas of many of the Star Trek sets and have invited the original cast members to visit and comment on it.

More here on the museum:

jedishrfu said:
This is quite awesome. Did you know that there’s a Star Trek Original Series museum in Ticonderoga NY. They have built exact replicas of many of the Star Trek sets and have invited the original cast members to visit and comment on it.

More here on the museum:

Yeah, I knew about that, and if I ever get to that part of the country (I'm on the opposite coast), it'll be a definite stop over.

Another group was able to purchase and recondition the Original Galileo shuttle Exterior shell ( the interior was a different set which was actually bigger than what would have fit in the exterior set). It is is on display in Houstin . Three years ago, The late Paul Allen put his extensive Star trek prop collection on display in Seattle. Included were some original set pieces, including the captain's chair and navigator/Helmsman console. I was able to use photos I took of them to increase the accuracy of my model.
jedishrfu
Mentor
Insights Author

The folks at the Ticonderoga site apparently got set blueprints to work with. Perhaps copies are available for purchase.
anorlunda
Staff Emeritus
Insights Author

Wow, thanks @jedishrfu. I drive through Ticonderoga frequently, but I never heard about that. I'll try to make a visit.
Janus
Staff Emeritus
Science Advisor
Insights Author
Gold Member

jedishrfu said:
The folks at the Ticonderoga site apparently got set blueprints to work with. Perhaps copies are available for purchase.

The best I could ever find in terms of "official" blueprints was basically this:
https://live.staticflickr.com/3517/3911884841_6352ab33d4_b.jpg
It is the sound stage set up for the show. It's good for the basic layout, but is lacking in detail.

I did use them as the basis for the corridor "walk-through" I posted here:
https://www.physicsforums.com/threa...rbmk-reactor-control-room.972067/post-6181100
But had to rely on screen shots, etc. for the detailing.
Janus
Staff Emeritus
Science Advisor
Insights Author
Gold Member

Model finished ( unless I decide to tweak a few details).

View after entering bridge from turbo-lift. 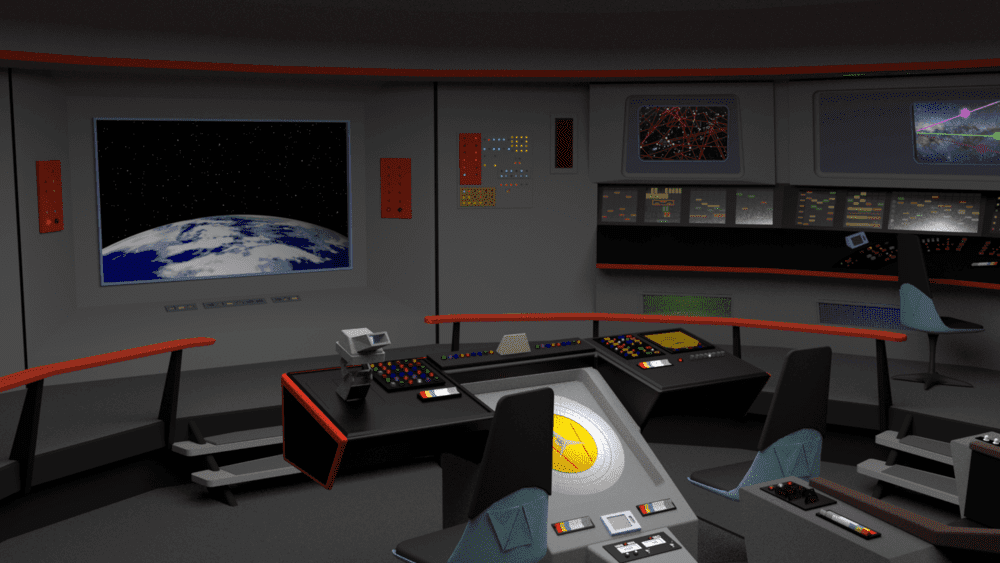 View form across bridge looking back towards turbo-lift and engineering station. 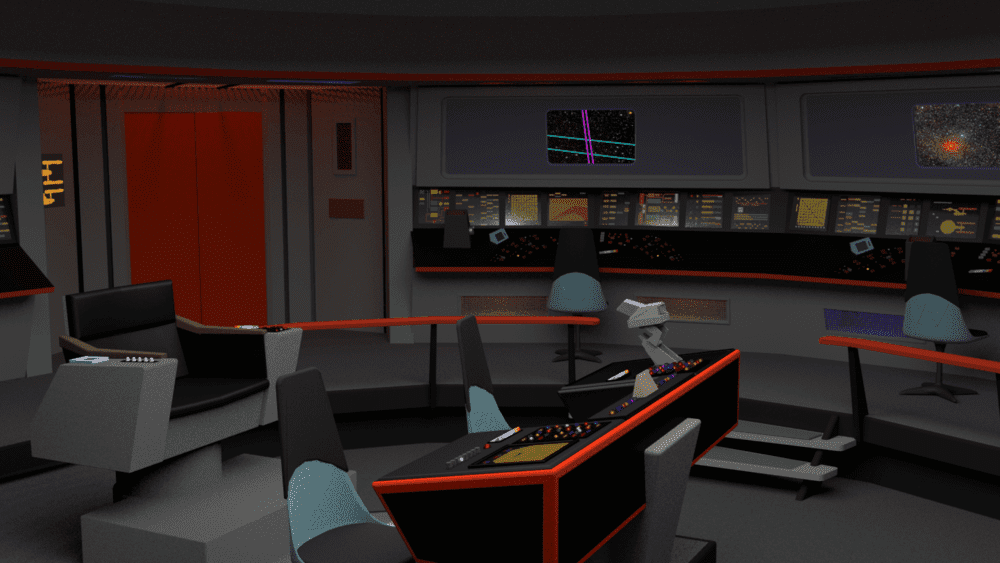 "Captains eye" view.
This uses two additional effects, A slight focal blur due to depth of field( helmsman's console is just slighty out of focus), and it is stereoscopic.

If you use the "cross your eyes" trick ( similar to how you view one of those "magic eye" images), you can see this in 3-D.

These are really great. Are these renders SVG based ie can they be expanded to poster size?

You might be able to startup a small business of printing posters or maybe T-shirt’s from them.
Janus
Staff Emeritus
Science Advisor
Insights Author
Gold Member

jedishrfu said:
These are really great. Are these renders SVG based ie can they be expanded to poster size?

You might be able to startup a small business of printing posters or maybe T-shirt’s from them.

Thanks.
They are bit-maps. This is pretty much required by the way the image is rendered. It uses ray-tracing. Essentially, you set up your model with a camera in specific location and light sources. Then the computer "shoots out rays" from the light source, calculates how they would interact with objects in the scene, and determines which rays would reflect into the camera. Each pixel of the image is determined by what it expects the camera to "see" there depending on the texture you assigned to objects, the angle at which the ray is being reflected from the surface, etc.

The top 2 images were done at at 75% of 1080p resolution( equivalent to 810p). While 1080p is the default full-res setting for blender, you can manually set it higher. The down side is that the larger the render in pixel number, the longer the render time.

I really just do this as a hobby. I just enjoy starting with an empty space, and slowly building it up into a complete scene. While it's always nice when someone likes what I've done, I really just do it for my own recreation.
Sometimes I am just playing around with an idea or trying to figure out how to produce a particular effect, with no finished scene in mind.

Other times, once I get the effect I'm trying for, it suggests the final scene in which to use it.
Such was the case for this "drawing coming to life" animation:

Beautiful renders @Janus . The 3-D trick doesn't quite work for me as well as 3-D pictures with the weird backgrounds but the 'earth view' out the port appears round.

The Star Trek Experience used to be based at the Hilton Hotel in Las Vegas, NV, if memory serves. Locals were outraged when the exhibit closed. My mother and Trekkie sister liked to visit the Experience to "practice Klingon" with the good looking actors adding ambiance to the set.

Keep up the good work. In my mind, they are true works of nostalgia and imagination. I remember building replica tricorder props and imagining how it might work.

I saw recently where someone did a DIY of a tricorder with a raspberry pi embedded within.

jedishrfu said:
I saw recently where someone did a DIY of a tricorder

I had a tricorder app for my Droid phone many years ago. It just did normal smartphone stuff like accelerometers, but the visuals and sound effects were Tricorder-like. I had fun looking at the expressions of people as I waved my phone around.
Janus
Staff Emeritus
Science Advisor
Insights Author
Gold Member

jedishrfu said:
Keep up the good work. In my mind, they are true works of nostalgia and imagination. I remember building replica tricorder props and imagining how it might work.

I saw recently where someone did a DIY of a tricorder with a raspberry pi embedded within.

Years ago, I fashioned a couple of Phaser replicas. They went well with the original series uniforms my Mom sewed up for my wife and I, which we wore to a couple of SF conventions.
Janus
Staff Emeritus
Science Advisor
Insights Author
Gold Member

For a more "sweeping" view of this model, I generated this animation. The quality isn't as fine (with some graininess on some surfaces), but this was a trade-off for rendering time. Even at this level, render times were ~15 min. per frame. That equals roughly 95 hrs to render the full animation.

That’s awesome, next you need to add some Star Trek music to it.
Klystron
Gold Member

I didn’t hear it until I turned up the volume. That’s even better than music,
Klystron
Gold Member

The Enterprise bridge resonates faintly with shipboard life; not unlike this link to "Zen Automata" by Jenks Miller. [I presume this is permissible.]

[Edit: played very softly beneath the 'bird song' and fan noises on the deck; enhanced when a hatch opens before returning to an unnoticed background hum.]
Last edited: Jun 16, 2019
jedishrfu
Mentor
Insights Author

Okay, a bit of an update:
For Christmas, my daughter got me VR goggles to use with my phone. Of course, I started thinking about how I could possibly adapt Blender 3D models to be seen with them. A bit of checking around and I figured out how to render this model as a 360 degree pano, and then upload it to momento360, From which it can be viewed with Google cardboard via VR goggles or by a computer as a image you can pan through 360 degree.
If you want to try it out, the link is:
https://momento360.com/e/u/5782c871...dium=other&heading=0&pitch=0&field-of-view=75

Some of the features are a bit grainy, which could be fixed by increasing the image resolution, but doing a pano took a long time to render. At even this resolution took some 15 hrs with my computer.
I was also trying to do a 3-D version with a render for each eye, but goofed somewhere and instead of creating an image with the two views stacked, it saved it as two separate images. I know that their is a way to make the googles show it as a stereoscopic image, but I 'll have to do a bit more investigation as to how to get this to work.
Anyway, tell me if the link works for you.
DEvens
Education Advisor
Gold Member

DEvens said:
That's very cool. Oh, I see you are using Blender. I have meant to try this software. It looks very good.

When I first got into 3D model rendering, I used POV-Ray. It is capable of some really good renders but is script driven. You have to create everything in a text "scene description file" and then render it. Then I discovered Moray, which is a graphics based modeler that exported to a Pov-Ray file. It didn't have all the features available with Pov-Ray, But you could open the file in Pov-Ray and edit it to add those items in. You could even open and do a Pov-Ray render from Moray itself.
However, once I got a windows 8 PC, this functionality quit working on my computer. So I always had to export, and open Pov-Ray separately. One reason for this is that the original developers quit the project and handed the license over to POV-Ray. There has been no further development of Moray since, not even to deal with the GUI interface issue. Moray also had the unfortunate tendency ( at least on my computer) to unexpectedly crash when the models got large.
So, for the last couple of years I started using Blender pretty much exclusively. I've had it on my computer for some time, but it always seemed a bit difficult to use. I think that a lot of this was just from changing over from one modeler that did things one way, to another that did them differently.

I'm still learning about it and its various features and abilities. Every so often I'll spend a great deal of time on a model trying to produce a particular effect only later to find out that there was a feature that would have made it much easier to do and produce a better result to boot.
davenn
Science Advisor
Gold Member

This inspired me to do a model of a different kind or "control room", the bridge of the starship Enterprise.

F
Is Haswell worth upgrading from Ivy Bridge?

F
Trying to use an old router as a wireless bridge