A 4D planet has no axis of rotation. Nothing special about planets, all freely rotating 4D bodies have two perpendicular planes of rigid rotation. (Clifford proved this in the 19th century.)

In 4D, two planes can be even more perpendicular than they are in our 3D world. Such planes may intersect only at a point. The planes of rotation of 4D Earth are like that.

An equator partitions a planet into two equal halves. In 4D a great circle does not partition the surface of a 4D sphere, so it isn't an equator. Instead, extremes of climate may be found at the two circles, so they have that in common with our poles. Excepting seasonless planets, one circle has the coldest climate on the planet, the other the hottest. Every point on each of these circles is the same distance from every point on the other circle. Just like our poles.

OK, then how about the set of points on the surface of 4D Earth that are halfway between these two circles? Yes, that is our Equator. For a shape it has the surface of a four dimensional torus. Unlike a 3D torus, the major and minor radii of a 4D torus may be of equal value without the torus intersecting itself, or even getting anywhere close to intersecting itself. This torus surface partitions the surface of the planet into two equal parts, so it is an equator. To get from the hotter hemisphere to the colder one, you must cross the Equator.

The circles are perpendicular, so to get from one to the other one need traverse only 90 degrees worth of the Earth's surface. To go from circle to Equator, 45 degrees.

Thank you for making that plane.
Algr

I'm reading your link. I seem to recall someone ages ago saying that planetary orbits can't be stable in four dimensions. Is that right? Someone else things that a four dimensional star caused the big bang...
Hornbein

Algr said:
I'm reading your link. I seem to recall someone ages ago saying that planetary orbits can't be stable in four dimensions. Is that right? Someone else things that a four dimensional star caused the big bang...

It's assuming that such familiar things could exist. If not, there isn't anything to say.
Algr

I was hoping someone solved that or showed that it wasn't true. Given how much more room there is in 4D, I would think that orbits would be more stable because it would be easier to prevent planets from interfering with each other. Maybe orbits are spheres rather than circles somehow?
robphy
Science Advisor
Homework Helper
Insights Author
Gold Member

Algr said:
I seem to recall someone ages ago saying that planetary orbits can't be stable in four dimensions. Is that right?

A popular guess, based on the guess that gravity field lines are also conserved in 4D. Were that demonstrated, there are a few more assumptions that yes, lead to instability.
Hornbein

My view is that in some other Universe there is no reason to expect elementary particles or the fundamental fields to exist at all. So I may as well do as I please. Strictly for pedagogical purposes, for developing intuition.

Assuming that 4D has the same laws that we see leads to trouble. Assume that atoms have the same size as ours, that HyperEarth has the same number of atoms as ours, and that Newton's law of gravity applies. In 4D HyperEarth is so much more compact that gravity at the surface is on the order of a million times what we experience. If HyperEarth has the same angular momentum as ours then it is rotating at a crazy rate. Fiddling with the laws so that familiar things can exist is well beyond what I dare attempt. So I deal with this as most people deal with huge problems. Ignore them.

I believe that one exception is special relativity. It is essentially 2+1 dimensional with extra dimensions irrelevant, so adding more dimensions shouldn't make any difference. I wonder about general relativity.
Hornbein

I have seen these sorts of arguments before but it is very nice to get them in such a polished, authoritative, and compact format.

I read Flatland when I was in junior high school. Flatland and most subsequent work relies heavily on projections. I once did an experiment. I made a fairly simple 3D shape, projected its shadow onto a wall, and took photos of that from six different perspectives. I could not infer the shape from the shadows, even though I knew what the shape was.

I have more empathy with Charles Howard Hinton's more ambitious goal of teaching the mind's eye of the reader to see in four dimensions. To this end he sold a collection of cubes with colored sides that simulated a four dimensional cube. One user who learned to do this complained that he had started a distracting autonomous process in his brain that he would rather not have and chose to suppress. 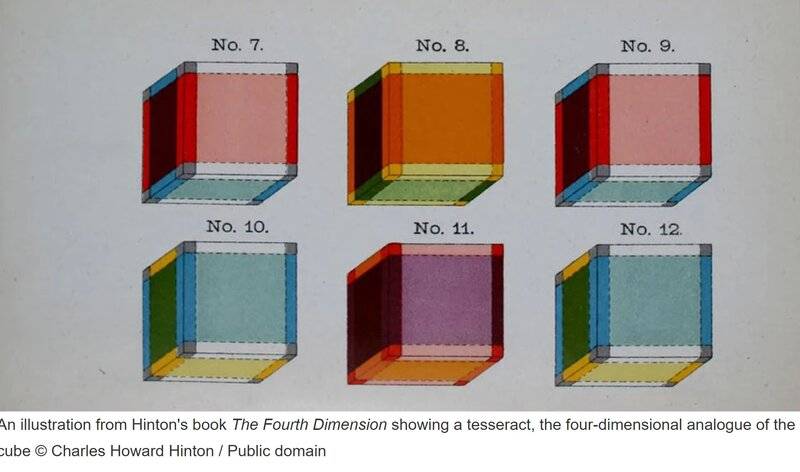 Stimulated by your post I learned some eye-opening things about Hinton. He was convicted and imprisoned for bigamy. Not entirely surprising, as his father James was an advocate of the practice. Just a chip off of the old block. However as an excon he was unemployable in the UK so he lit off for Yokohama(!) to teach English. Some things never change. He did have the offsetting good fortune of being the brother-in-law of George Boole's daughter Alicia Stott. She learned the system of 4D cubes, made notable models of some of the 4D Platonic solids, and in concert with one of Charles' old Oxford University buddies had enough mojo to get his book A New Era of Thought published.

There are animations of 4D objects that show the weirdest aspect, the two perpendicular planes of rotation. Here's one such, of the 24-cell, a Platonic solid that exists only in 4 dimensions.

I'm not sure but I believe it isn't a straight projection. It seems he is using perspective so that closer vertices are larger, and including all four dimensions in calculations of how far away each vertex is.
Last edited: Jan 25, 2023
Hornbein

Algr said:
I was hoping someone solved that or showed that it wasn't true. Given how much more room there is in 4D, I would think that orbits would be more stable because it would be easier to prevent planets from interfering with each other.

It depends on what the law of gravity is in 4D. My stance is that this is so speculative I'm not going to worry about it. If the law is Newton's then you have stable orbits no matter how many dimensions. If you have an inverse cube law instead then no stable orbits.

In the 19th century the stability of our Solar System was The Big Question that attracted the best minds. Laplace and Lagrange more or less solved it and concluded that the system was stable. The current view is that the system is chaotic and unpredictable. We are OK for the next one million years but after that who knows.

Since the solution in our 3D world is unknown there is little hope for a firm answer in 4D. But you are right, all that great deal of extra space opens up other possibilities. It depends on how planets form. This is another thing we don't really understand. For example, the formation of binary stars isn't understood. It is one of the great open questions of astrophysics.

All that being said, we might as well have a little fun. Our Universe has a great many elliptical galaxies. They aren't planar. The stars orbit every which way. Maybe there could be a solar system like that. Another possibility is two more or less perpendicular planes of planets. This recently got a big boost with observations of a binary system called X-1. It is a big star orbiting a black hole. They found that the orbital plane of the star around the black hole was perpendicular to the spin of said hole. That's suggestive. Normally in 3D you can't have a single body having two perpendicular rotations but a rarified dust cloud could be an exception. These rotations of charged particles could then condense into two discs. If it can happen in 3D then it certainly would in Newtonian 4D.

X-1 has been studied for a long time but remains a mystery. The star and hole were once much larger. The two bodies are so close together those stars would have intersected. How can this be? If several generations of astrophysicists can't figure it out then I certainly am not going to.


Maybe orbits are spheres rather than circles somehow?

If you have two Newtonian bodies then the orbits are always planar for the simple reason that all forces involved are in the plane. There is nothing to move anything out of that plane, no matter how many dimensions one may imagine. If you have three bodies then it was the only problem known to have moved Isaac to declare it made his head ache. I'm not going to take it on.
Share:
Share

Suggested for: Equator of a Planet with Four Spatial Dimensions is a 4D Torus

Clocks On a Hyperdimensional Planet

Motorized Watercraft on a Hyperdimensional Planet

How do you measure time on a tide locked planet?
3

Hiding an orbital colony 'behind' a planet from a flare star

Sapient Life Indigenous to a Planet Orbiting a Red Dwarf

Gravity, heat, flooding, and centrifugal force on a tidal-locked planet

Experiments on a new planet

Aftermath of a collision with an ice giant