Hi You guys, my first post on here. I'm having a bit of a hard time getting my head around Tension and friction, so am hoping for a little help, which would be much appreciated!

Block B rests on block A, which in turn is on a horizontal tabletop. There is no friction between A and the tabletop, but the coefficient of static friction between A and B is u_s < 1. A massless string connects A to a block C. The string passes over a frictionless and massless pulley, and block C is suspended from the other end. 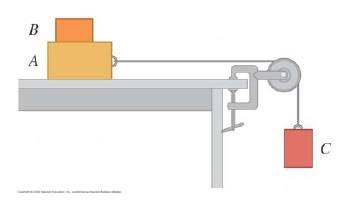 b) what is the largest mass C can have so that A and B still slide together when the system is released from rest.?

I've drawn the free body diagrams, and trying to find a expression for m_C. But am a bit stuck. If there had been no friction bewteen A and B, B would have slid of when the system is released, so somehow the friction plays into this.
I also know that T is equal for both A and C.
And that A+B moves along the x-axis and C on the y-axis, whic means there is no a_y for A+B and no a_x for C. As they are connected they both move with the same acceleration, so far so good.

My initial thought is :

am I completely on the wrong track??

The answer must contain [itex]\mu_s[/itex] and the mass of B.

The forces on C are simply the weight mC and the tension upward by the string.

The tension pulls on A and B.

A, B and C must accelerate together as a single mass if B is to remain stationary with respect to A.

What is the friction between B and A? How does that relate to the acceleration of A+B+C.
Share:
Share