Obviously, we can't fund everything in physics. There has to be a selection process. Who should make the decision? Should it be based on opinion polls of the public? I think the decision should be made by physicists. Most physicists would say that cold fusion is "fake physics" but mainstream fusion research is legitimate, and worth funding. If you left it up to opinion polls, the public might decide to fund cold fusion but not mainstream fusion research!

Physics is different than other subjects, including other fields of natural science.

A member of the public who is not a biologist can form a well informed opinion about whether the government should fund a program to identify specific genes within the human genome.

A member of the public who is not a physicist can not form any opinion whatsoever about whether the government should fund a program to look for neutrinoless double beta decay.

Physics is uniquely inaccessible to the public which can not evaluate the relative merit of various physics programs. The public should support government spending on physics in general but should not be involved in picking and choosing which specific physics proposals should receive what funding. It should be based on process similar to referees or peer review.

And how is this done in your country?

I also disagree with the uniqueness of physics.
Astronuc
Staff Emeritus
Science Advisor

David Neves said:
A member of the public who is not a biologist scientist can form a well informed opinion . . .

That is certainly possible, but not guaranteed. Apparently many don't or possibly can't become well-informed.

Many areas of science, engineering, or technology appear to be inaccessible to many because many lack the necessary education or proficiency to be able to comprehend the science. However, that does not stop many from expressing an opinion or belief about the science.
David Neves

Of course, members of the public are free to express their opinions regarding any subject. However, should that be what the government uses to decide what to spend money on in regards to physics? Usually, we assume that elected officials, maybe overly optimistically, beholden to their constituents, decide how to spend the tax-payer's money based on what the public wants to spend it on, since it is, after all, their money. However, with physics related spending, I think that public opinion should be less relevant because the public is less able to form an opinion, and the politicians themselves are less able to form their own opinion, and need to rely on expert opinion.

The average person, without a scientific background, is not able to judge whether something is science or pseudoscience. They have no way of telling the difference. They have to rely on experts to make that determination for them. This means the public can not be directly involved in deciding what science should be funded, based on its merits. This is not true for other subjects. An educated member of the public can form a reasoned opinion on the best use of tax payers regarding non-science spending, even if they are not an expert on those other subjects, such as whether we should fund a specific military jet, an oil pipeline, government health care, agricultural subsidies, a program to teach children to read, or any number of subjects. However, the same person would be incapable of forming any opinion whatsoever on whether we should spend money on the search for axions. When the debate about government spending on a fundamental physics project becomes a public political debate, it degenerates into a farcical charade. Think of the political debate about funding the Superconducting Super Collider. The public and the politicians did not have slightest clue what this machine was supposed to do, or look for, so the best argument that the proponents could come up with was that it would bring jobs to Texas, which played into the hands of critics, who claimed that it was just pork barrel spending. I remember watching the McLaughlin group on PBS, and Jack Germond was arguing in favor of the project by claiming that it would lead to technology that would improve our daily lives, which I knew was ludicrous. What this means is that the debate about government spending on physics can not, and should not be politicized. At least, we should try to minimize the extent to which it's politicized. Instead, funding should be determined by experts similar to a referee or peer review process.
Choppy
Science Advisor
Education Advisor
Insights Author

David, you seem to be presenting some very elitist opinions. I would echo Vanadium50's question. Perhaps you could start by explaining your understanding of how the scientific funding process currently works and then criticise specific aspects of it, or even better, offer suggestions for improvement from there.

As a taxpayer, I am always wary when someone suggests I should not have a say in what happens to my money.
Ygggdrasil
Science Advisor
Insights Author
Gold Member
2021 Award

David Neves said:
Instead, funding should be determined by experts similar to a referee or peer review process.

Do you understand how the majority of funding for scientific research is awarded in the US?


96% of NSF funds are awarded through competitive merit review, in which a panel of expert scientists review and rank grant proposals from researchers in their field.
http://journals.plos.org/plosone/article?id=10.1371/journal.pone.0018680
https://www.nsf.gov/bfa/dias/policy/merit_review/
Also, regarding the comments about biology, my response as a biologist is: 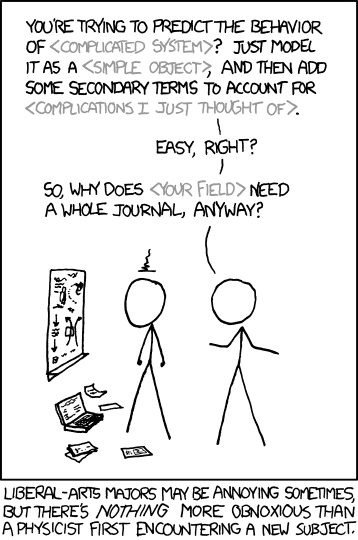 Funding usually depends on who wants the results. If it's research just to push the boundaries of knowledge, the scientists should determine which experiment would produce the most results for the buck. Specific useful things tend to be funded through regular old capitalism. I doubt there was much government money researching fibre optics, the telecom companies absorb costs like that.
Share:
Share

Suggested for: Funding in Physics

How Much Will Sponsoring Physics Research Cost? (Amount to Sponsor Research through a Grant)

About some information on research funding

Musing on which element discussed most in physics class

The role of mathematics in physics