Glow in the dark lake

Glow in the dark lake in Australia

I came across this just yet and it looks amazing :O
So I wanted to share with you guys :P 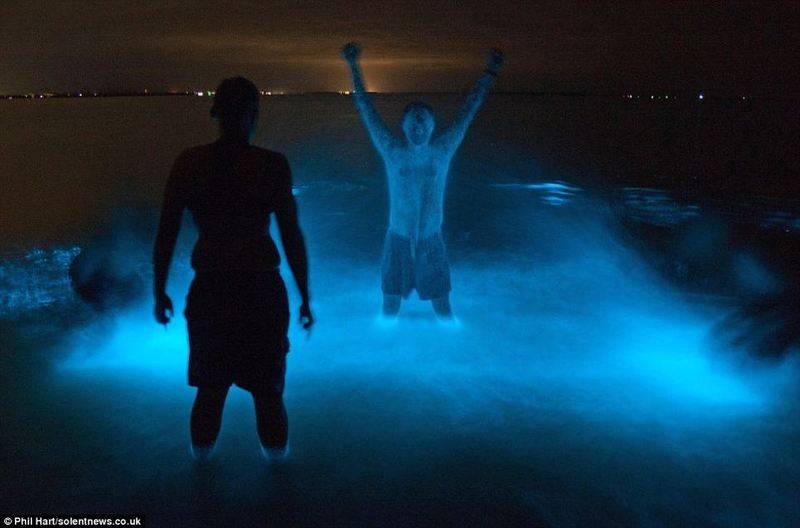 Swimming is supposed to give you a healthy glow, but these swimmers weren't quite sure what was going on when they took a late-night dip and turned a fluorescent shade of blue.

'It was like we were playing with radioactive paint,' said photographer Phil Hart who snapped the bizarre sight as his friends emerged from a lake in the dark of night.

The light is created by a chemical reaction called bioluminescence, which happens when a naturally-occuring micro-organism in the water is disturbed.

Phil, 34, put his camera on a very slow shutter speed and threw sand and stones into the water to cause the reaction and capture as much of the blue haze as possible.

These images are particularly stunning because the concentration of the micro-organism 'Noctiluca Scintillans' was abnormally high when he took the photos at Gippsland Lakes in Victoria, Australia. 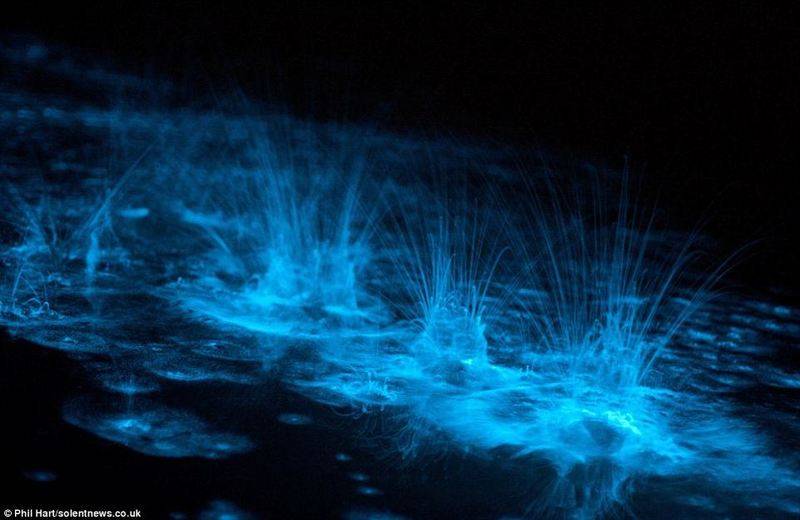 Phil said: 'To be there watching this bioluminescence is spellbinding and to see it like this is very rare.

'I am a program director with an organisation that has been running canoeing camps on the Gippsland Lakes for 50 years. Nobody can remember the bioluminescence ever being as bright as this.

It is believed the combination of bushfires and floods created the high levels of nutrients in the lakes for the organisms to feed.

'It may not happen again in my lifetime,' said Phil. 'I feel fortunate to have been there to see it and to have had my camera gear there to record it.'

Phil, from Melbourne, added: 'While the luminescence was obvious to the eye, the bright blue colour is only apparent in photos.

'When the first photo I took appeared on screen I could hardly believe it - the people in the water looked freakish. 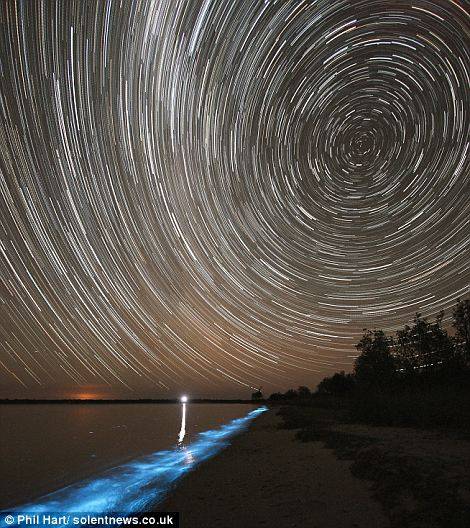 The dark side of the blue glow.

The glow is an indicator of a harmful algal bloom created by something called Noctiluca scintillans, nicknamed Sea Sparkle.

Noctiluca is a type of single-cell life that eats plankton and is eaten by other species. The plankton and Noctiluca become more abundant when nitrogen and phosphorous from farm run-off increase.
. . .
But recent studies show it is much more complicated and links them to blooms that have been harmful to marine life. Noctiluca's role as both prey and predator can eventually magnify the accumulation of algae toxins in the food chain, according to oceanographer R. Eugene Turner at Louisiana State University.

Bio-luminescence is pretty awesome. I took a kayak ride in a bio bay in Puerto Rico a few years back

Suggested for: Glow in the dark lake

Glow in the dark E.Coli

The eyes and dark conditions.

The Dark Side of Elephants
2