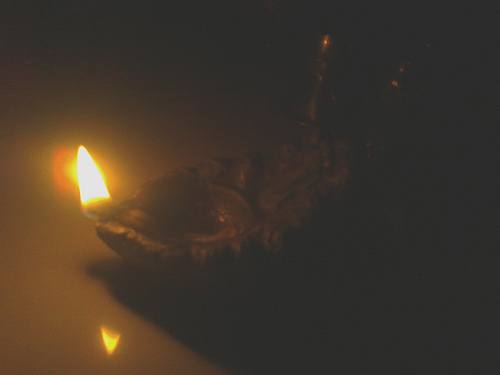 A festival that celebrates the victory of light over darkness, wisdom over ignorance and courage over cowardice..... I Wish everybody a Happy Deepavali !!​
​

see, why don't we have any rational holidays in the US, we stole all our holidays from Catholics who stole it from Pagans.

mish, is "light over darkness" symbolism or do you speak actually of mankind harnessing fire? Darkness is a disappearing resource on Earth nowadays.
mishrashubham

Pythagorean said:
mish, is "light over darkness" symbolism or do you speak actually of mankind harnessing fire?


Pythagorean said:
Darkness is a disappearing resource on Earth nowadays.

Must be dark there in Alaska... In which month does the sun shy away completely there?
Pythagorean
Gold Member

ah yes, I should have clicked the link before I posted.

The sun never shies away completely in my region, at least, not in the sense that it's not somehow "above" us, but only for a couple hours in the winter months (like four, I'd venture). It's 9:00am right now and getting light, so it's not that bad yet; I'd give it another month or two.

But I suppose cloud cover and the http://en.wikipedia.org/wiki/Inversion_(meteorology)" [Broken] will keep you from ever actually seeing the sun most of that time.

During the summer we do actually have quite well lit nights, but shade is still very potent; it's more comparable to having a long dusk that transitions straight to dawn, probably... the sun actually sets, but you still see it's glow behind the horizon and it never wanders that far before coming back up.
Last edited by a moderator: May 5, 2017
micromass
Staff Emeritus
Science Advisor
Homework Helper
Insights Author

I particularly dread this day because of all the crackers. Just give me all the sweets and leave me in a quiet, peaceful environment.
Evo
Mentor

A
Does god want people happy