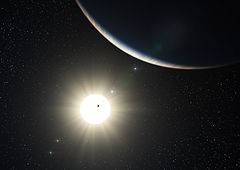 
Wikipedia said:
HD 10180 is a solar-type star that scientists believe has at least five planets, and possibly as many as seven. It is 127 light-years away, in the southern constellation of Hydrus. The mass and metallicity of HD 10180 are 6% and 20% greater than the values of the Sun.

127 light years away! That's approx thirty-one times farther than our nearest star.
Two-way communication would take more than two-hundred fifty years. Anyone sending a message would be dead by the time a reply arrived.
Orion1

Active two-way personal human to human (or alien) communication between any two different star systems would be limited to about 40 light years radius and only one message per human lifetime.

I Largest Hard Planet of Gravity 1g we have ever Discovered?