Given these two helicopter designs, which, if any, of them would be more stable? 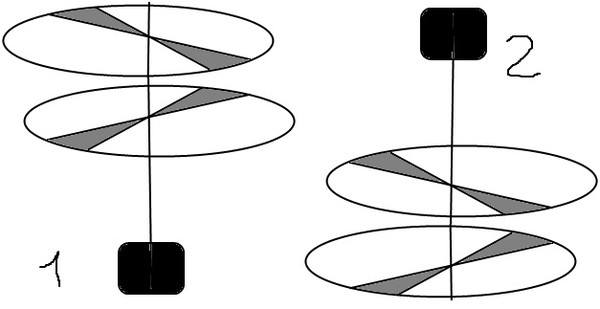 (No image? 1 is propellers on top, body below, second is body above, propellers below)

Common sense tells that 1 would be more stable, but experience and rocket pendulum falacity shows that both are equally (un-)stable.
Is that really so?
Would the aerodynamics change something in it?
And, is there a proper (i.e. tell-anybody one) explanation why so?

Well, with # 2, you would have a hard time taking off or landing on propellers.
Plus most of the weight is above the propellers; likely very unstable.
rcgldr
Homework Helper

If the rotors rotate the opposite direction, then #1 should be much more stable. I'm not aware of a twin rotor system where the rotors turn in the same direction.

rcgldr said:
If the rotors rotate the opposite direction, then #1 should be much more stable. I'm not aware of a twin rotor system where the rotors turn in the same direction.

Show me even one vid of an inverted helicopter surviving even 10 seconds.
NobodySpecial

pallidin said:
Show me even one vid of an inverted helicopter surviving even 10 seconds.

pallidin said:
Show me even one vid of an inverted helicopter surviving even 10 seconds.

You did note that I mentioned radio control model helicopters flying inverted, it's not an issue. The pitch and roll (cyclic) stability / dampening can be adjusted by using flybars (cyclic feedback). Other than orientation, inverted hovers are not an issue.

There are a lot of videos of these at youtube:

Sustained inverted at 1:15 into this video:


pallidin said:
Well, with # 2, you would have a hard time taking off or landing on propellers.

For this stunt, there's a spindle to "land" on, but it's a risky stunt, as shown in this blade scraping incident:

This is not a stupid question, and deserves better answers.

To first approximation, the force of the blades for each model acts through the center of mass. In neither model is there either a restoring or a destabilizing torque that would either right it, or tip it over.

To this first approximation, neither has a restoring force that would right it from a perturbed orientation from the vertical. Without further details of how a rotor acts dynamically in air in relative motion or considering the gyroscopic forces, we haven't answered why one is more unstable than the other, or even if there is a difference in stability.
Last edited: Oct 24, 2010
rcgldr
Homework Helper

Assuming that the "body" of the contra-rotating rotor helicopter has a much lower drag to mass ratio than the rotors, then once the helicopter leans, it will start to "slip" downwards. The relatively higher drag to mass ratio of the rotors should cause a upwards pitch torque, and cause the helicopter to level out, if the "body" is below the rotors. (Some "tuning", like how far the body is below the rotors would be needed to prevent over-correction). If the "body" is above the rotors, you have an unstable condition that gets worse over time. There are small indoor twin rotor helis that are very stable in hover and seem to rely on this effect.
Last edited: Oct 24, 2010
pallidin

"Air cars" are NOT hovercrafts. They ARE mini-helicopters with multiple fan blades.
pallidin

Also, think of a hot air balloon.
Which would be more naturally stable, with the gondola on the bottom, or one with it on the top?
rcgldr
Homework Helper

As mentioned in my previous post, the self-correction occurs due to the pitching or roll torque created by the difference in drag and mass ratios between the rotors and the body when the helicopter is moving perpendicular to the axis, such as when it's tilted and in a "slip" condition. Since the net drag force is not in line with the net reaction force to deceleration of the masses, you end up with a correcting torque if the body is below the rotors.
Last edited: Oct 24, 2010
Buzzworks

rcgldr said:
If the rotors rotate the opposite direction, then #1 should be much more stable. I'm not aware of a twin rotor system where the rotors turn in the same direction.

Actual experience tells me not so much. I've actually removed the flybar on my single rotor RC helicopter. Flew it without any electronic stabilization.

Gyroscopic effects did very little to dampen roll/pitch. The helicopter was very unstable even if the weight is below the rotor disk. It would keep rolling/pitching until you correct it.

I've not had the opportunity to fly a chopper, but I've been in them. From a pilot's perspective, as opposed to the aforementioned physics approaches, I would tend to think of the fuselage as a pendulum. With it hanging below the disk, it will oscillate under side loads to some extent, and soon dampen them. When it's above the disk, it will seek to be under it and thus amplify such oscillations in order to attain that position. I don't know whether or not that's correct from a physics standpoint, but it's what my "flying gut" tells me.
rcgldr
Homework Helper

crapworks said:
Actual experience tells me not so much. I've actually removed the flybar on my single rotor RC helicopter. Flew it without any electronic stabilization. Gyroscopic effects did very little to dampen roll/pitch. The helicopter was very unstable even if the weight is below the rotor disk.

As far a pitch / roll dampening goes, if the helicopter was perched on a single point, it would fall over faster with the rotor not spinning than with the rotor spinning (at 0 pitch with no crosswind), so there is some dampening. However this is offset by the fact that lift from the rotor increases with speed2 of the rotor, so even a slight horizontal gust will upset a hovering helicopter due to the difference in lift from the advancing versus retreating blade (relative to the wind). The gyroscopic effect does shift the responce to cyclic roll / pitch torques almost 90 degrees to result in pitch / roll response, but this is taken care of by having the model shift the cyclic inputs about 90 degrees to compensate.


I have not flown a 'flybar less' coaxial helicopter yet

Should be much more stable, since any crosswind induced torque is virtually eliminated (the two rotors produce opposing torques). The small models have an issue that the same design that makes them stable about the rotor axis, tends to also make them climb as opposed to moving forwards at any significant speed, making them difficult to fly outdoors in even moderate wind, but that could be due to insufficient cyclic effect.

Getting back to the OP, as posted above, it would seem that the offset between the net drag force versus the net reaction force to deceleration is one factor in the stability of those models. I'm not sure what the other factors are in actual models that have flybars or the onboard electronics which may include gyros.


Danger said:
I would tend to think of the fuselage as a pendulum. With it hanging below the disk, it will oscillate under side loads to some extent, and soon dampen them.

Except the only source for side loads would be crosswinds. The main rotor generates lift (positive, zero, or negative) and torque. The tail rotor does generates some side load though, enough that a stable hover requires a slight lean.
Last edited: Oct 25, 2010
helisphere

here is a coaxial rotor with CG above, looks pretty stable to me...

If CoM is located in the direction of applied force from CoP, the system is always unstable. The reason that a rocket is more stable with high CoM is because the low CoP of fins is more significant than low CoP of the engine, and force from fins points away from CoM. What you are actually fighting by raising CoM is the CoP of the fuselage drag, not the CoP of engine thrust.
JaredJames

Would it not make more sense to imagine the rotors in a stable hover in both cases and replace them with a solid surface. That way you have two pendulums in different positions - one incredibly stable (1), the other incredibly unstable (2).
helisphere

if you break it down to just the lift force and the force of gravity, there is not much difference between the CG above or CG below scenarios. That is if you make the assumption that the rotor is rigid enough so that it's thrust vector is always coincident with the CG.

Only considering the two forces, Gravity and thrust (lift), we can see that no moments are ever generated. Because both forces are always coincident to the CG.

Since gravity is alway vertical and thrust is always oriented normal to the rotor, the two forces are only coincident when the orientaion is such that the rotor is perpendicular to gravity. So if the helicopter is not level there will be an unbalanced horizontal force causing translational movement. As the helicopter accelerates there is also F=ma that balances out any moments. These conditions are pretty similar whether upside down or right side up.

Basically both cases are neutral stability.

However, when we start considering aerodynamic forces, and a thrust vector not remaining coincident to the CG, everything changes and gets a lot more complicated...
JaredJames

Any displacement of the mass in 1 will result in gravity acting to return it to the start point, leaving you with a very stable design.

In number 2, any displacement of the mass will result in craft trying to turn itself over, a very unstable design.

The only way to ensure stability in number 2 is to have a variable pitch rotor system to compensate for movement of the mass. But any large movements and there's nothing you can do. This isn't a problem faced in number one because even large movements of the mass will still result in it trying to return to its original position.

As I said, think of it as an inverted pendulum.
helisphere

A pendelum rights itself because gravity generates a moment about a hanging attachment point. That is not the case here, the thrust and weight forces do not generate a moment about the CG and therefore there will be no pendelum or righting effect.

The imbalance of forces indicated below will only cause translational acceleration, they will NOT cause any rotation because no moment is generated about the CG. For proof just watch the video in post #15 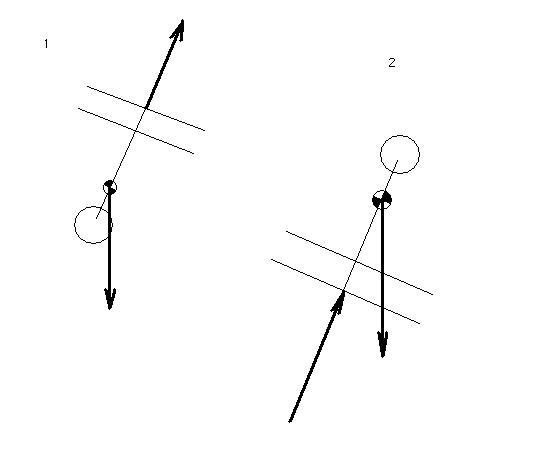 jarednjames said:
Any displacement of the mass in 1 will result in gravity acting to return it to the start point, leaving you with a very stable design.

In number 2, any displacement of the mass will result in craft trying to turn itself over, a very unstable design.

The problem is purely with the fact that realistically, the force from rotor will never pass exactly through center of mass. If it did, both designs would be equally stable. Even that in itself isn't sufficient to make one design more stable than the other. It's only when you add aerodynamic forces on the body that 2 becomes less stable than 1.
helisphere

Here is another example of CG above thrust and it is stable enough for a pilot to control simply by shifting his weight.

This question has been asked before: https://www.physicsforums.com/showthread.php?t=383661

Hence my responses being what they are.
helisphere

Yes, it's obviously an issue not easily understood. I don't have all the answers either.

Also, if you are talking about semi-rigid, teetering type rotor then the pendelum effect is valid because the thrust vector does not remain coincident to the CG. But still the aerodynamic forces are the overriding factor in stability, and they are more complicated than the mass, inertia, gravity parts of the problem.
davenn
Science Advisor
Gold Member

helisphere said:
here is a coaxial rotor with CG above, looks pretty stable to me...
Listen to the last 30 seconds and see what it says about its stability
https://www.youtube.com/watch?v=C_UtPmb3Z-o

Position of the helicopter

B Helicopter in spin

I A plausible Jet Helicopter?