Evaporative cooling is less effective in the tropics due to the high humidity, so spraying water may have limited effectiveness. It may be fine in the south of France though.
Rive

The problem I see with water spraying is, that you should expect a lot of algae. Especially if the water 'cleanness' is limited.
sophiecentaur
Science Advisor
Gold Member
2020 Award

In the USA West, most houseboats are under way or at anchor when occupied. Not at a dock or a mooring. You have many choices where to anchor. But 7 meters down is a sink of cool water.

Common language problems again. In UK, the term Houseboat tends to refer to a craft on a permanent mooring (many of them could never move away) so we're talking about a different creature. 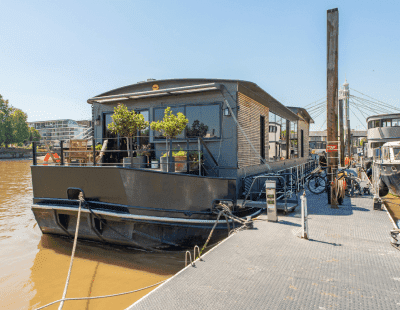 There is a popular pastime of inland cruising on the UK Canal System and the traditional Narrow Boat (steel, these days) is good for that because it is the maximum width (7ft) for passing through many of the canal locks. There are marinas these days but many moorings are restricted to the canal sides so a well defined direction.
Also the climate is much less extreme.

The idea of water cooling the hull and deck with thin inner skin tanks could be attractive but you would need an indirect circulation to avoid fouling up the innards. (Expensive and not retro - fittable) Perhaps a system of dribbling water down the outside of the hull would work? A very small 12V solar pump would do that and the nighttime hull temperature would not be a problem. By the time the solar pump stopped working, the Sun's radiation would be well past its peak. But the surface would need to be washed with enough water flow to avoid possible smells of drying fecund water.
sophiecentaur
Science Advisor
Gold Member
2020 Award

DaveC426913 said:
(Also, since that appears to be a flowing river, anchor swing be reduced to a few degrees of "hunting".)

I don't think that photo was a serious 'mooring suggestion' aamof. It looks more like a place for white water rafting than somewhere to spend the night.
sophiecentaur
Science Advisor
Gold Member
2020 Award

Rive said:
The problem I see with water spraying is, that you should expect a lot of algae. Especially if the water 'cleanness' is limited.

Scrubbing the deck can be a pain at the best of times. I think you'd need more of a jet wash than a sprinkler if you wanted to have a non-slippery deck. Algae would get into any ropes out there and into joins between timbers and fittings - they have all day to work on that, just like weeds in the garden.
anorlunda
Staff Emeritus
Insights Author

We should stop this thread because of the many mental models of the circumstances of the posters.

I was thinking of Lake Powell and Lake Mead in the USA southwest. Those lakes host fleets of houseboats. All the pictures I posted in this thread were from Lake Powell. There are no fast flowing waters in the lakes. Lake Powell does not often have excess nutrients like phosphorus and nitrogen. So my advice was location specific.
sophiecentaur
Science Advisor
Gold Member
2020 Award

PS Why isn't there something on the market for this purpose? Boating Folk are suckers for fancy gadgets (mea culpa). Since I sold my boat I became a wealthy man.
DaveC426913
Gold Member

sophiecentaur said:
I don't think that photo was a serious 'mooring suggestion' aamof. It looks more like a place for white water rafting than somewhere to spend the night.

anorlunda said:
We should stop this thread because of the many mental models of the circumstances of the posters.

Yep. Too many undisclosed variables and an unfamiliar topic. It's even worse than trying to discuss house wiring. It does give a nice insight into the various experiences different members have had, though and gives us practice with new vocabulary.
Share:
Share

How to reduce RH of air from evaporative cooler?

How to calculate temperature of a pipe with hot air flowing though?