How did Schrödinger find his equation?

I have a little commentary I can give a little later, but for right now I would suggest reading the reasoning from Schrodinger himself:
http://web.archive.org/web/20081217...toricPaper/Schroedinger/Schroedinger1926c.pdf
fresh_42
Mentor
Insights Author

Here is what Wikipedia (and Google translate) has about it:

The equation named after him was postulated by Schrödinger in 1926 . The starting point was the idea of matter waves, going back to Louis de Broglie , and the Hamilton-Jacobi theory of classical mechanics. The effect ##S## classical mechanics is identified with the phase of a matter wave. As soon as typical distances are smaller than the wavelength, diffraction phenomena play a role, and the classic mechanics must be replaced by a wave mechanics.

The Schrödinger equation cannot be derived from classical physics, but is a postulate. Formally, however, the Schrödinger equation can be derived from the Hamilton function (expression for the energy) of the problem under consideration
$$
E=\dfrac{\mathbf{p^2}}{2m} +V(\mathbf{r},t)
$$
can be derived by replacing the classic quantities energy, momentum and location according to the correspondence principle with the corresponding quantum mechanical operators :
\begin{align*}
E&\longrightarrow \hat{E}=i \hbar\dfrac{\partial}{\partial t}\\[6pt]
\mathbf{p}&\longrightarrow \hat{\mathbf{p}}=-i \hbar \nabla\\[6pt]
\mathbf{r} &\longrightarrow \hat{\mathbf{r}} = \mathbf{r}
\end{align*}
Subsequent application to the unknown wave function ##\psi = \psi (\mathbf{r}, t)## gives the Schrödinger equation
$$
i \hbar \dfrac{\partial \psi}{\partial t}=-\dfrac{\hbar^2}{2m}+\Delta \psi + V\psi
$$

In the same way, the Hamilton function can be converted into a Hamilton operator.

Historically, Schrödinger started from Louis de Broglie's description of free particles and introduced analogies between atomic physics and electromagnetic waves in the form of de Broglie waves (matter waves):
$$
\psi(\mathbf{r},t) = A \,\exp\left(-\dfrac{ i }{\hbar}(Et- \mathbf{p}\cdot\mathbf{r})\right)
$$
in which ##A## is a constant. This wave function is a solution to the Schrödinger equation just mentioned
##V (\mathbf{r}, t) = 0##. In the statistical interpretation of quantum mechanics (founded by Max Born ) there is the square of the amount ##|\psi|^{2}## the probability function density of the particle to the wave function.
George Jones
Staff Emeritus
Science Advisor
Gold Member

By going on a winter skiing vacation in the Alps with his mistress instead of his wife.

In the late fall or early winter of 1925, Schrodinger gave a colloquium on de Broglie's work. Peter Debye attended this colloquium and commented that if Schrodinger wanted to talk about waves, he should have a wave equation.

Arriving home, he separated variables, and found that he could not solve the radial equation. He went to his wife's lover, Hermann Weyl, for help with solving this.
vanhees71
Science Advisor
Insights Author
Gold Member

All this can be nicely read in the biography

and which contains this illustration: 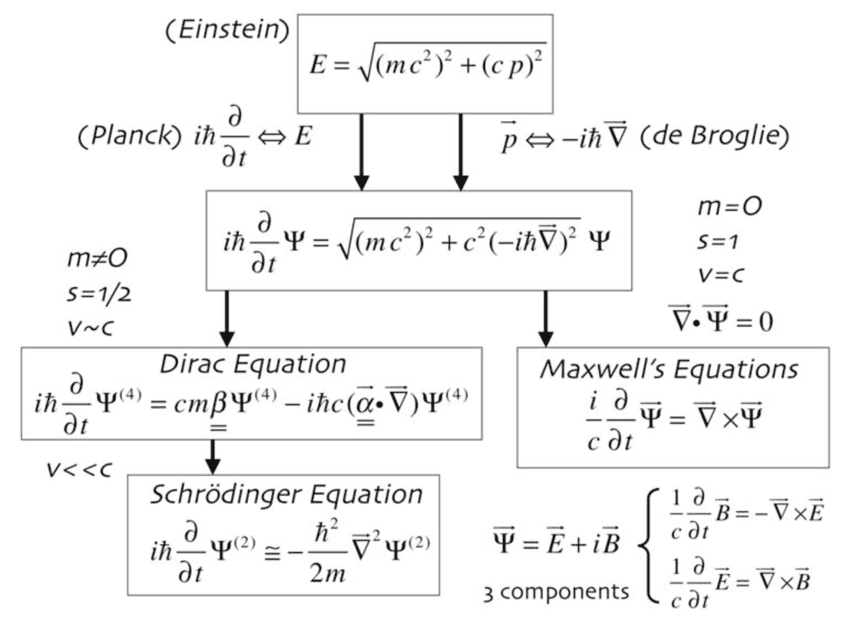 Well, are the problems with the "non-local" operator in the 2nd box discussed in this paper? I don't click on research gate links anymore.
hilbert2
Science Advisor
Insights Author
Gold Member

vanhees71 said:
Well, are the problems with the "non-local" operator in the 2nd box discussed in this paper? I don't click on research gate links anymore.

Well, the idea of "wave functions", i.e., a 1st-quantization formalism for (interacting) relativistic QT, is at least problematic. Also phenomenologically QT phenomena at realtivistic energies are characterized by creation and distruction processes of particles, and that's why QFT ("2nd quantization") is anyway the much more convenient tool to describe relativistic QT than any 1st-quantization formalism. The only example I have for the latter is Dirac's formulation of QED as hole theory. As far as I know it's indeed equivalent to the standard formulation as a relativistic local QFT. The latter formulation is way more convenient than the former, and that's why nowadays nobody teaches QED in term's of Dirac's hole theory, as far as I know.
sysprog

vanhees71 said:
Well, are the problems with the "non-local" operator in the 2nd box discussed in this paper? I don't click on research gate links anymore.

I guess I'm not as 'seasoned' as you are in that regard ##-## the paper doesn't discuss 'Schrödinger steering', but it does make brief reference to the fact that the photon doesn't exhibit the locality that is characterizable with Schrödinger's ('(##v<<c##)-bounded' approximation) equation.

Just after Fig. 1 the paper says this:

​
In modern terms, a photon is an elementary excitation of the quantized electromagnetic field. If it is known a priori that only one such excitation exists, it can be treated as a (quasi-) particle, roughly analogous to an electron. It has unique properties, arising from its zero rest mass and its spin-one nature. In particular, there is no position operator for a photon, leading some to conclude that there can be no properly defined wave function, in the Schroedinger sense, which allows localizing the particle to a point. On the other hand, it is known that even electrons, when relativistic, don’t have properly defined wave functions in the Schroedinger sense [2,3], and this opens our minds to broader definitions of wave functions. In relativistic quantum theory, one distinguishes between charge-density amplitudes, mass-density amplitudes, and particle-number density amplitudes. These can have different localization properties. Photons, of course, are inherently relativistic, so it is not surprising that we need to be careful about defining their wave functions.​
And later:

So it seems to be a good paper. Is there a link to a respectable source like the arXiv. The problem with research gate is that once I wanted to download a paper, for which I had to register, and after that my e-mail inbox was spammed like hell by all kind of information about papers I didn't want to read ;-)).

Indeed, a 1st-quantization formalism ("wave function") for photons is at least problematic. I'd not use it at all. Photons are created and destroyed (emitted and absorbed) all the time. So why should one insist on a wave-function picture.
sysprog

I'll have a look at it. It's a theory paper typed in MS Word though

vanhees71 said:
It's a theory paper typed in MS Word though

I summarized the basic argument from that paper in a long-ago post:

Related Threads on How did Schrödinger find his equation?

Why did Schrodinger call his equation eigenvalue problem?

I Did Schrödinger himself take his "Cat Experiment" seriously?

What was Schrodinger's interpretation of his own equation?

How did Heisenberg derive his famous principle?

A Starting with the Schrodinger equation, how do we find the Hamiltonian matrix?

How Schro discovered his equation

The History and Development of Schrodinger's Wave Equation

How did Bohr come up with his model before De Broglie?

I How to turn model of Schrödinger's Equation 2D?

I How to discretize the Schrödinger equation with spin