How did this worker approach this fuel mass at Chernobyl?

So in under 10,000 years, we'll be back to normal, assuming living with uranium ore is normal.

Separately, does the plutonium get shielded to some extent by the surrounding uranium in the elephants foot?
Otherwise, even years after the accident it is surprising the worker could be so close to corium mass. Is all that residual radiation alpha particles?
nikkkom
Insights Author

etudiant said:
So in under 10,000 years, we'll be back to normal, assuming living with uranium ore is normal.

Separately, does the plutonium get shielded to some extent by the surrounding uranium in the elephants foot?

Pu239 and Pu240 are alpha-active. They are shielded even by air. The worker appears to wear protection which ensures he does not get any dust contamination on/in his body, so his main worries in this situation are gammas.
nikkkom
Insights Author 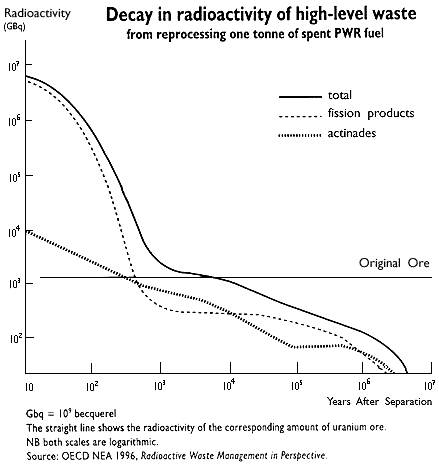 nikkkom said:
The diagram is for waste from spent fuel reprocessing. Reprocessing (at least its type now actively in use by French) removes Uranium _and Plutonium_, thus diagram's "actinades" [sic] probably excludes Pu.

Yes I believe you are correct. Sorry about that.
ThomasGeorgeAlan

Kutt said:
Here is another photo of the "elephant's foot." You can see distortions and abnormalities in the photograph caused by EXTREME levels of radiation. This radiation (thousands of rads per hour) actually caused the lower half of the worker to appear transparent.

This isn't due to radiation emission this is basic long exposure photography in low light the technician is illuminating the subject whilst the camera takes a long exposure, I see no visible influence on the film from the elephants foot

I would just add a few comments to the interesting discussion...

Firstly, the ghosting in the photograph is due to a long exposure (long open shutter time) used to get a brighter clearer photograph in low light conditions. The figure moved from upright to bending forward (or vice-versa) but spent longer leaning forwards during the photograph which is why that ghost image is clearer and the hat appears blue in colour. If you wish to see scary effects then watch the early video captured of the accident where you can witness bright beta/gamma flashes randomly bursting onto the film, and some shots fade to grey from the amount of alpha waves being absorbed by the film.


Secondly, when the ghost person moved they also moved the torchlight they are holding. The path of the torch appears as the squiggle and that squiggle is also reflected in the water pooled on the floor (a reflection). It is likely they were moving the torch to spread light across the exposure, and this is why the photograph is so strangely lit.

There very well maybe nuclear aberations captured in the photograph, but I cannot spot anything distinctive.

It surprised scientists that the 'Elephant's Foot' had a VERY high close proximity radiation reading and a VERY low reading one metre away, I believe it was a thousand times less, though I cannot find the source I referenced that from at the moment. Yes, it is notable that it is Corium, but very strange Corium, with a strange composition, decaying unpredictably. Based on that knowledge, the ghost got a lot more exposure than the photographer.

Thirdly, when the accident initially happened a lot of people were over-exposed to radiation, the workers in the main cooling pump room, one manager in the turbine hall (who prevented the other electricians from going closer), the control room staff, the firemen who attended what they falsely believed to be a fire, and was more likely an open nuclear reaction, some local fishermen fishing the cooling ponds, and anyone openly observing the accident without protection.

Once the Soviets accepted and understood that the reactor was breached they took scientific advice about personal exposure limits. Having said that, it is likely that they set limits way higher than anywhere else would have been likely to, and appeared to use conscripted people to do work as "ordered', so I am uncertain about 'Heroic Actions', and simple do not know how many people participated in the clear up operations and subsequent building of the sarcophagus of their free will, or were they under orders?

They used about 4,000 people to clear the roof, the idea was simply to allow one to two minutes of exposure each. Most of these people seem unscathed by the exposure, and one of the greatest lessons learned from the accident seems to be that the human body is really more resilient to radiation than previously understood. The people left in Pripyat for 36 hours too long seem to have suffered many biological side effects of that overstay.

In fact, studies have shown that the deeper and more serious side effects were psychological. Many involved in the incident went on to have a kind of deathwish mentality, drinking and smoking too much because they believed they were doomed from the radiation exposure, and died from lung cancer or liver damage due to those excesses. It is possible that a good percentage of Worldwide cancer death has been caused by Chernobyl but that data is also likely to be even higher from the dispersed inventory of nuclear weapons testing of the last century.

The human body can repair radiation damage, we are incredibly regenerative, we have evolved on a radioactive planet, but there are limits to how much damage we can sustain and how quickly we can repair it. When those limits are breached we become ill, and when severely breached we die. We are more susceptible to certain radioactive nuclides, such as Iodine 131 because it can accumulate in our thyroid glands and tissue. It is a sophisticated subject and I am oversimplifying it.

Fourthly, I beieve that the greatest unknowns about the Chernobyl accident are the exact cause and mechanism of the explosions, the makeup of the core inventory, and where that core inventory is now. How much of the core uranium was burned up, how much fuel was new, how much plutonium was present, is it possible that the poisoned reactor actually started to superbreed plutonium? The reactivity of that core on that night was staggering.

I suspect that there may be much less of the core left in the 'core' than anyone thinks. I would really enjoy reading a discussion about how much of core could have simply vapourised, scientists suggested that the spread of radiation across the World was from steam, whereas I suspect that the majority of the core inventory was substantially vapourised into the atmosphere, and that there is a lot less left in block 4 than we think.

I look forward to your views and the ongoing discussion!

Related Threads on How did this worker approach this fuel mass at Chernobyl?

Chernobyl Alternative to generators to prevent the Chernobyl disaster
2

Fukushima Underestimating the ongoing disaster at Fukushima vs Chernobyl?

Why did they use Boron at Chernobyl?

Chernobyl Is anyone else fascinated with the chernobyl disaster?

Radiation interference with camera at Chernobyl?

Chernobyl The steps of Chernobyl and effects of radiation
3