How do you understand these two simple concepts？ (velocity and acceleration)

Homework Statement:
Is that only need to compare absolute values? And we can ignore the final positive/negative sign, correct？ Why do feel his mind is wrong？

Relevant Equations:
a = Change in velocity / Time taken to change the velocity 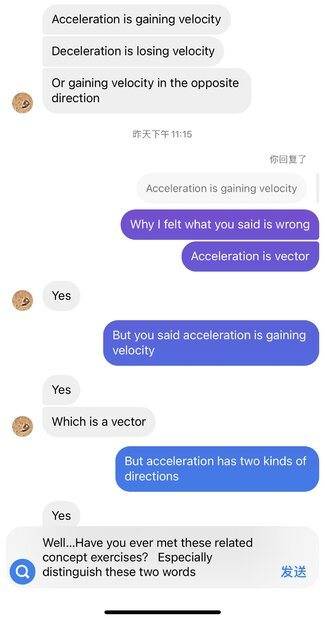 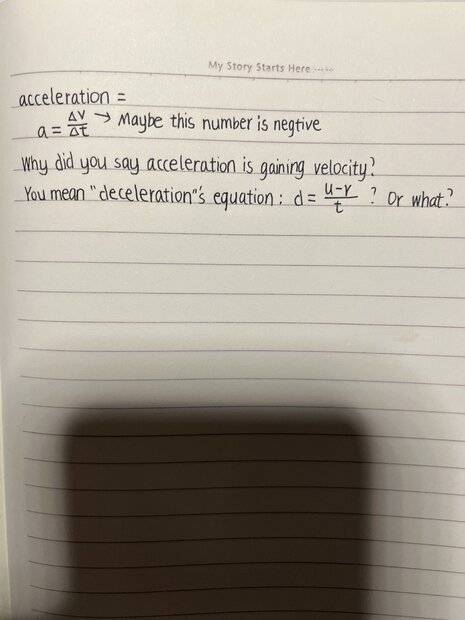 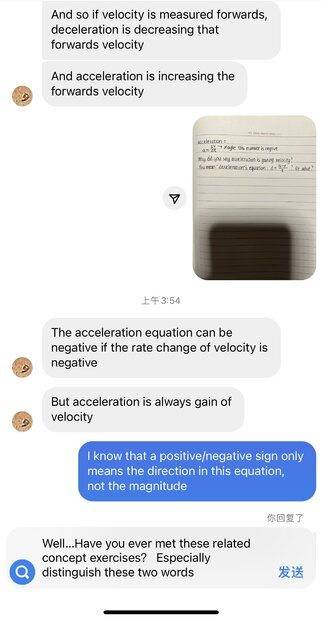 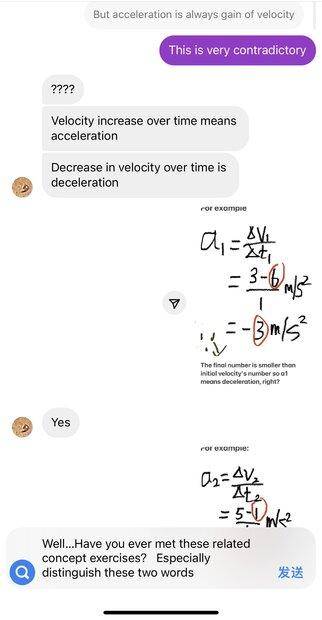 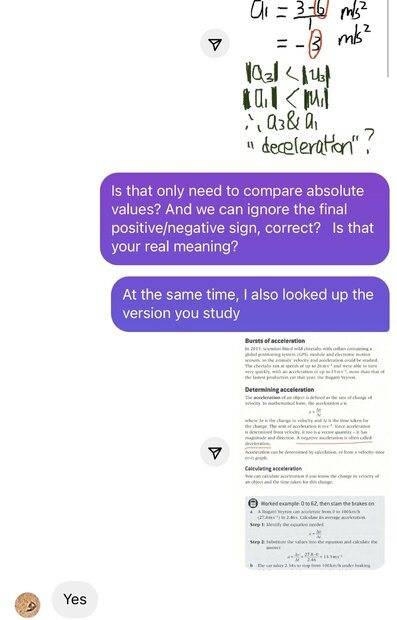 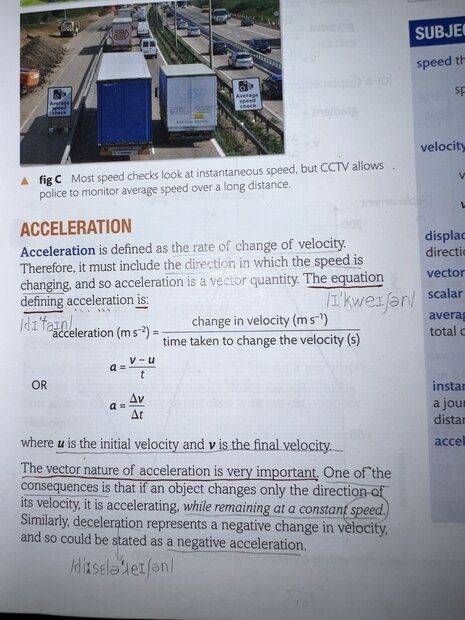 As the textbook notes, acceleration is the change of velocity. It is a vector, and in one dimension you can reduce it to a scalar which is positive or negative, depending upon the direction.

The use of "deceleration" is every day language, and is seldom used in physics.

All I can say is that it seems that your pictured discussion makes a little mess with the terms of acceleration, velocity and speed . It says for example that if velocity increases, then we have acceleration but this is wrong at first place, because velocity is a vector and we can't say that a vector increases. We can say that the magnitude of a vector increases (or decreases). Velocity is a vector, while speed is the magnitude or norm of velocity (lookup magnitude or norm of a vector) and is therefore a scalar. We can say that speed increases or decreases but we just can't say that velocity increases or decreases, UNLESS we have motion in a straight line, where velocity is plus or minus speed depending if the object is moving towards left or right.
Last edited: May 9, 2022
jbriggs444
Science Advisor
Homework Helper

If you want to avoid having people look at you funny, try to avoid phrases such as "accelerate to a stop" in casual English conversation. While technically correct in a physics context, it sounds absolutely wrong in normal speech.

The phrases "speed up" and "slow down" can be used as technically correct and natural replacements for the casual English notions of "accelerate" and "decelerate".
Last edited: May 9, 2022
XinyanWang

DrClaude said:
As the textbook notes, acceleration is the change of velocity. It is a vector, and in one dimension you can reduce it to a scalar which is positive or negative, depending upon the direction.

The use of "deceleration" is every day language, and is seldom used in physics.

I still think your part of understanding is wrong. Because resultant force and mass decide the acceleration. The acceleration's absolute value means how fast this object's velocity changes. It has nothing with velocity and time. When will acceleration appear？ I think this is why the sentence emphasizes again. The vector nature of acceleration is very important. Just like the book says. If an object changes only the direction of velocity, it’s accelerating！！And！"while remaining at a constant speed"！！Constant speed！ Speed doesn’t increase. That's it! A negative change in velocity, that's all! It's like putting a minus sign in front of the delta of velocity change. I feel that the meaning of this word is a pronoun. So could be stated as "a negative acceleration"
haruspex
Science Advisor
Homework Helper
Insights Author
Gold Member
2022 Award

@XinyanWang, please clarify which is your half of the conversation in post #1.
kuruman
Science Advisor
Homework Helper
Insights Author
Gold Member

@XinyanWang also clarify your unorthodox use of exclamation marks. This link explains how and when to use them. They are not meant to be used as separators if that's what you were using them for.
XinyanWang

haruspex said:
@XinyanWang, please clarify which is your half of the conversation in post #1.

So your text is in the blue/mauve bubbles and your interlocutor's (the other person's) is in the grey bubbles, yes?
Then broadly I agree with you. The other person is confusing magnitude and vector concepts.

It doesn't help that many books get it a bit wrong, describing speed as a scalar. No, scalars are just like 1D vectors, so have a sign. Speed is a magnitude.

In referring to speed in everyday English, an acceleration is an increase in magnitude and deceleration is a reduction in magnitude. In this usage, there is the further ambiguity that acceleration may mean the amount by which the speed increased: "the car accelerated from rest to 30kph", or the rate at which it increased.

DrClaude said:
acceleration is the change of velocity

Even so, there is still an ambiguity. There is average acceleration over an interval of time, ##\vec a_{avg}=\frac{\Delta \vec v}{\Delta t}##, and instantaneous acceleration, the limit of the average acceleration as ##\Delta t## tends to zero. The textbook should make that clearer.
kuruman
Science Advisor
Homework Helper
Insights Author
Gold Member

haruspex said:
"A negative acceleration is called a deceleration", is nonsense.

I don't think this statement is nonsense. I think it's incomplete. The completed statement, "If we align the positive axis of coordinates with the velocity, a deceleration is a negative acceleration" makes a lot of sense. The "negative" here is understood as the sign of the 1D scalar component of the acceleration. I hasten to add that I am not advocating the use of "deceleration" in physics because I think it is unnecessary and may lead to negativist confusion, e.g. "Is ##g## positive or negative?" or "Is the amount of heat lost a positive or a negative number?".
haruspex
Science Advisor
Homework Helper
Insights Author
Gold Member
2022 Award

kuruman said:
The completed statement, "If we align the positive axis of coordinates with the velocity, a deceleration is a negative acceleration" makes a lot of sense.

It's nonsense because there was no such specification. This is one of the things the OP is rightly complaining about. In fact, your completion still doesn't quite work. Even after choosing the coordinates so carefully, one cannot say that a vector is negative. One can only say that the coefficient of the vector when written as a scalar multiple of the coordinate unit vector is negative.

If you want to rewrite it in a form that does make sense then just say that if the magnitude of the velocity (the speed) is decreasing then it can be classified as a deceleration. Or equivalently, if the dot product of velocity and acceleration is negative: ##\frac d{dt}{{\vec v}^2}=2\vec v.\dot{\vec v}##.
Last edited: May 11, 2022
Share:
Share

Suggested for: How do you understand these two simple concepts？ (velocity and acceleration)

When do these two moving particles come together?

Which statement is true? (Velocity and Acceleration of a Tennis Ball)
2

What is the perceived relative velocity of these two motorcycles?