How is LIGO doing?

Quoting myself from an earlier discussion. A-LIGO is still down for upgrades for the O3 run scheduled in the autumn.


The original LIGO equipment was much less sensitive than the Advanced LIGO that started gathering data for the first (01) run September 12, 2015 and found the first confirmed merger two days later. Before the first run was ended January, 2016 it discovered one candidate and one additional confirmed merger.

The second more sensitive O2 run started November 30, 2016 but was was suspended between May 8 and June 8 for maintenance, Virgo joined the two LIGOs on August 1 and the run was shut down August 25. This run discovered four mergers, two of them in August alone.

Also the wiki page you linked to links to https://en.wikipedia.org/wiki/List_of_gravitational_wave_observations which answers your first questions.
phyzguy
Science Advisor

I really like the attached graphic, which shows the LIGO/VIRGO detected events and how the BH/NS masses compare to objects detected by other means. 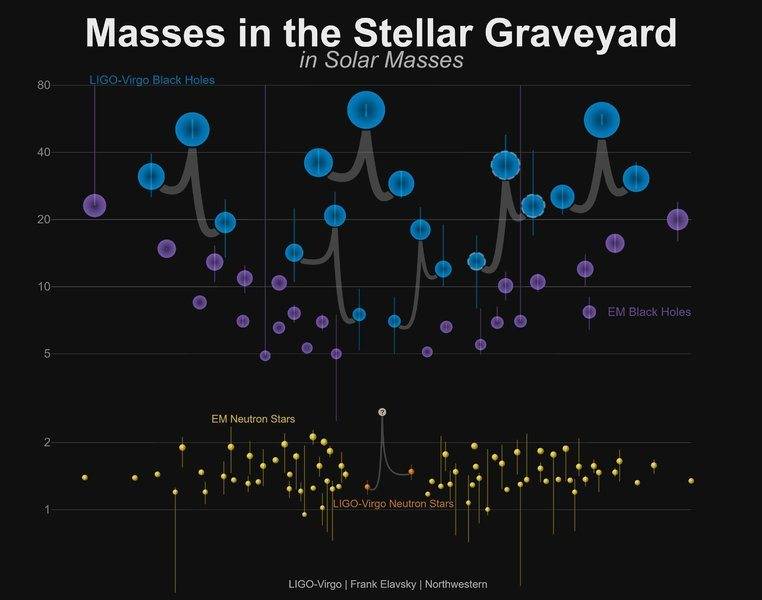 phyzguy said:
I really like the attached graphic, which shows the LIGO/VIRGO detected events and how the BH/NS masses compare to objects detected by other means.

What is the horizontal axis in that graph? Time?
phyzguy
Science Advisor

berkeman said:
What is the horizontal axis in that graph? Time?

I'm not really sure, but I don't think the horizontal axis means anything. The objects are just spread out to differentiate them. The arrows indicate the mergers.
Idaho Astro

Interestingly, the 7 July 2017 news release from LIGO (https://www.ligo.org/news.php) references eight candidate detections, although it's not clear whether that number includes the four detections (or five, if you count the not-sufficiently-statistically-significant event LVT151012) which had already been made public at that time. Since then, only two further detections have been made public. It would be nice to know if there are candidates still being worked on, or if they didn't pan out.
Share:
Share

Related Threads on How is LIGO doing?

B How does LIGO measure gravitational waves

A
B How does the LIGO experiment affect SpaceTime?

B What is going on at LIGO/VIRGO?

I Question about LIGO